During the modern era in Notre Dame hockey, no coach has had more success than Jeff Jackson.

Jackson has compiled a .604 winning percentage and also piloted the Irish to their only two Frozen Four Appearances in program history. Additionally, the Irish have had a recent run of NHL draft picks and guys who have managed to stay in the league during the Jackson Era. Three of these players – Erik Condra, Ian Cole, and Bryan Rust – will seek to become just the fifth Notre Dame player to have their name inscribed on Lord Stanley’s Cup and the first Since Mark Eaton in 2009. 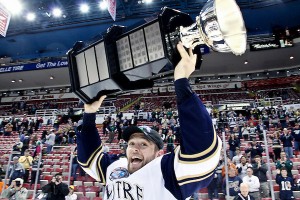 As the playoffs enter the Conference Finals stage, it is a guarantee that one or two of the aforementioned will make an appearance in the Finals. Rust and Cole are both playing for Pittsburgh, while Condra plays for the Tampa Bay Lightning, the Penguins’ Conference Finals opponent. They will seek to join Bill Nyrop, Don Jackson, Brett Lebda, and Eaton as previous Stanley Cup winners. Nyrop, with the Montreal Canadiens, and Jackson, with the Edmonton Oilers, are the only Notre Dame players to play on a Cup-winning team multiple times.

Bryan Rust was a four year letter winner at Notre Dame and led the team in scoring as a senior. He was a third round pick of the Penguins in 2010 after graduating from Notre Dame with a degree in finance. After spending most of the 2014-2015 season in the minors, Rust seemed to find a place with the Penguins this season playing in 41 games. He currently plays on the Penguins third line with Chris Kunitz and Evgeni Malkin. During the playoffs, Rust has appeared in 10 games contributing 2 goals and 1 assist and more importantly being defensively responsible as demonstrated by his +4 rating. 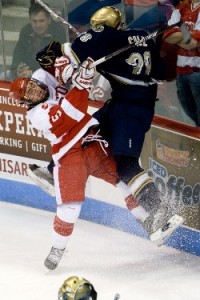 Erik Condra, a former All-American and captain at Notre Dame, has logged over 350 career NHL games playing for both Ottawa and Tampa Bay. He was originally a 7th round pick of the Ottawa Senators following a sensational career at Notre Dame, where he earned degrees in psychology and pre-professional studies (aka pre-med). Condra appeared in 54 regular season games this season, contributing 6 goals and 5 assists. However, he has seen his role reduced during the post-season and has currently appeared in just 3 games for the Lightning.

After being the highest drafted player in Notre Dame history (18th overall in 2007), Ian Cole has seemed to find his niche in Pittsburgh this season. Cole was arguably the best defensemen ever to play at Notre Dame. He appeared in 70 games this season, the most in his six years in the league. Cole contributed 12 assists for the Penguins in the regular season and has played very well in the playoffs. During the post-season, he has played in every game and been very solid registering a +5 rating.

As a fan of the NHL with no rooting interest in the final four teams, I’m excited of the prospect of 1 or 2 Notre Dame players in the Stanley Cup Finals. For the record, I like the Rust and Cole’s Penguins to advance 4-2.