Purcell Pavilion was the scene for yet another historical moment in Notre Dame Women’s Basketball history. The Lady Irish took a 23-point deficit and converted it into a win over the Lady Vols in a comeback for the ages. The Lady Irish ended the night with a 37-point swing, defeating Tennessee 84-70. Let’s take a glimpse into this storied night to see how this comeback unfolded. 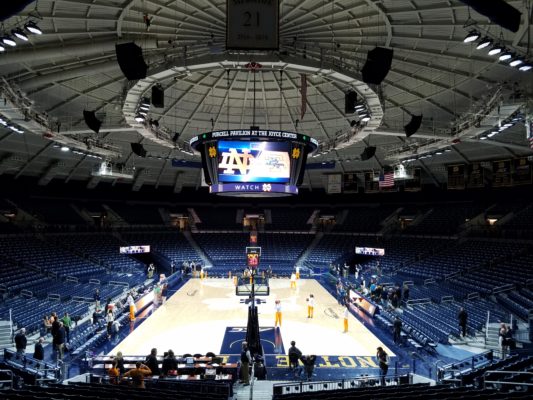 The first quarter started with a series of uncharacteristic events  unfolded for the Lady Irish. The sloppy play started with a turnover by Marina Mabrey on the first offensive possession. This was followed by a steal on the Lady Irish defensive end by Kathryn Westbeld, but Jackie Young missed a jumper on the other end, and an offensive rebound by Mabrey led to another missed jumper, this time by Arike Ogunbowale. Jessica Shepard scored the first two points for the Irish, followed by Mabrey with a lay-up for another two points. Those points would be the last points scored by the Lady Irish in a span of three minutes.

The Lady Vols had two strong runs in the first quarter. Mercedes Russell and Meme Jackson both contributed 4 points each, starting their first run, a 10-0 effort.

Shepard stopped the bleeding with a jumper for two points, but the Lady Vols regrouped and started another 11-0 run. This time Jaime Nared led the run with five points, including a three-pointer. This run was stopped when Mabrey drew a foul from Evina Westbrook and made both free throw attempts.

Tennessee also had a third, shorter  4-0 run to close out the first quarter with Evina Westbrook and Rennia Davis scoring two points apiece. The Lady Vols took a commanding 27-10 lead at the end of the first quarter, which they dominated with their defensive pressure and offensive ball control.

The Irish deficit sat at 17.

The second quarter brought a minor shift in momentum for the Lady Irish, but it wasn’t easy. The Lady Irish only scored seven points in the first 4:27 of the quarter. On the other side of the court, the Lady Vols scored 9 points, building their lead to 23 points.

At 5:33 in the second, the Lady Irish turned on some of their own pressure. The run started with Ogunbowale shooting a monster three-pointer that brought Purcell Pavilion to its feet.

A minute later, Ogunbowale did it all over again and it’s clear the Lady Irish have found  the inside of the hoop.

With some much needed offense and defense, ND ended the quarter with a 10-0 run. The Lady Irish won the second quarter 17-12, bringing the score at halftime to 39-27 Lady Vols.

The Irish cut their deficit to 12.

In the first six minutes of the second half, the Lady Vols pushed their lead back to 16.. Jackson had seven points including a three-pointer and Russell contributed 4 points as well.

The Irish also had approximately two minutes  of scoreless basketball; however, Mabrey brought Purcell Pavilion thundering to life with a deep three-pointer. Shepard wouldn’t be denied either as she contributed four late points.  By the end of the third quarter, the Irish put 23 on the board compared to the Lady Vols 21. The score after three quarters was 60-50 Lady Vols.

The Irish deficit was now down to 10.

In the fourth, the Lady Vols pushed their lead to 11 points early, but from there, the Irish started to chip away. The Lady Vols left 22 points on the court by missing six free throws, 4 three-pointers, and two jumpers. The Irish exploited those mistakes.

With a solid defensive hold, the Irish shut down the Lady Vols on two runs of their own, starting with a10-0 run. Layups by Westbeld and Ogunbowale cut the Vols lead to one. Ogunbowale went to the charity stripe and made two free throws and the Irish had their first lead since 8:05 in the first quarter.

The Lady Irish came all the way back and even added some for protection. The Irish shot 12-20 from the field including 3-3 from three-point range and 7-7 from the charity stripe. The Irish won the fourth quarter 34-10, completed the comeback, and made history with a final of 84-70. 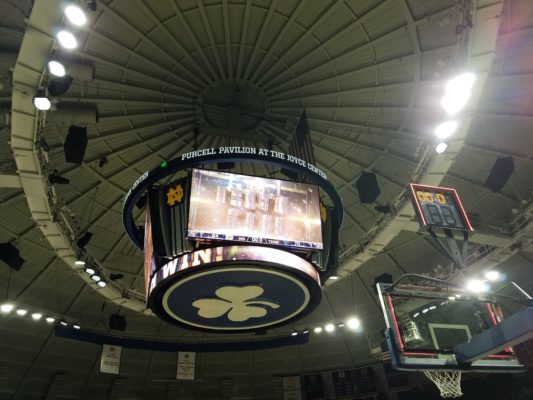 Coach McGraw summed up the evening with her opening statement. “That was an unbelievable win. I am so proud of this team right now because of the fight. We went down to Louisville and got our ass kicked in and we really need to respond and I think we had something to prove tonight. We got down 23 and we continued to fight and we continued to compete. I thought the difference in the second half was our defense. We got deflections. We got steals and rebounds and that got us our transition game. We attacked the rim in the second half.”