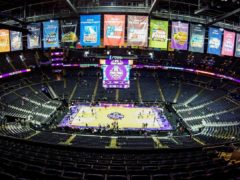 Notre Dame versus UConn, a tale of two foes from the Big East matching up in an unlikely place. Their two worlds collided at the Final Four in Columbus Ohio. The Final Four is the 48th time that Notre Dame and UConn have done battle on a basketball court. Going into Friday evening, UConn led the series 36-11. In NCAA tournament play against each other they are at three wins apiece. There is no other way to get the National Championship than watching the two teams settle the score on a basketball court.

UConn came into the basketball game with a 36-0 record on the season and the overall #1 seed. Notre Dame came into the evening with a 33-3 record and the #1 seed coming out of the Spokane region. The Huskies had not lost a game since last year’s match up against Mississippi St. Notre Dame had lost to UConn earlier in the season at Storrs, and to Louisville twice. Notre Dame basketball had the hardest road to get to this point. Playing without three scholarship players the entire season, and their starters having to put in longer minutes as the bench developed through the season. Certainly adversity had stared in the face of this team all season.

Adversity is defined in the Oxford dictionary as: “a difficult or unpleasant situation.” Coach McGraw talked about the adversity all season. The one message constantly delivered was “we are focusing on what we have, not on what we don’t have” It’s those words that delivered this team to this point. The team on the floor Friday night was preparing for this moment all season.

It was no surprise that UConn started out very strong in the beginning moments of the game. That is what UConn does. Impose their will early and it is over for their competitor before it even starts. that lasted for a brief moment. The Fighting Irish defense was stifling. Shutting down the mighty Huskies by playing great defense early and controlling tempo on the offense. The question for the Fighting Irish was, who is going to step up and be the difference maker? The answer to the question came into focus early as Jackie Young was unstoppable. Scoring 11 of the 24 points by the Fighting Irish. Defensively the Irish played as a solid unit and holding the tenacious Huskies to 14 points. The Huskies were stunned by the energy of the Irish. ND won the first quarter 24-14.

The Huskies play at a level in which Coach Auriemma sets for all his teams. That level is losing is just not acceptable. Year after year, team after team, the players from UConn buy into his method of coaching and are very successful in his style of teaching. The second quarter showed just that. UConn opened up the quarter with a 13-0 run and the Irish appeared confused as to what had happened. Jackie Young stopped the run as the Irish were now trying to climb out of the deficit that had been created. The Irish had only a handful of baskets in the quarter as UConn set its own form of tempo to hold the Irish to 10 points across 10 minutes. The Huskies scored 27 points and won the second quarter with a score of 27-10 and a score of 41-34.

At the half social media blew up. ND fans were concerned with the previous quarter was the image of quarters to come. Being mindful and understanding this team, I remarked “Coach McGraw will get the team into the locker room and reset the offense and defense. I also reminded them that this team had come back from 23 down against the Volunteers and if anyone could come back it was this team.”

The third quarter was a quarter of resurgence. The Irish fought back. The defense tightened up and the offense went back to work. Arike Ogunbowale, Marina Mabrey and Jackie Young all contributed with points from beyond the arc. While the defense didn’t completely shut UConn down they limited the Huskies to just 19 points, the Fighting Irish starters contributed 22 points which led them to winning the quarter and down 3 points with the score of 60-57 to end the third quarter.

UConn was pressing on as they worked towards earning yet another trip to the National Championship game. Crystal Dangerfield was not going to let ND get back in the game as she drilled a three-pointer to put the Huskies up by eight with 6:49 remaining in the game. That was not going to stop the Irish. Ogunbowale went on her own personal run of 5-0, cutting again into the Huskies lead. The Irish pulled within two with a score of 69-67.

The Irish were not done. Late in the fourth quarter the Irish went on a 6-0 run, throttled by Ogunbowale and Young and the Irish took the lead 79-74 with 21 seconds remaining. That much clock left in a game is an eternity in basketball. After a three-pointer by Napheesa Collier, Kia Nurse got the ball back after an ND turnover and tied the game at knotted at 79.

Kia Nurse once again a factor to start overtime, drained a three-pointer that gave the Huskies a lead once again. The adversity that ND had faced all season came to a climax. The Irish had their own run of 9-2, that powered them to the lead. But the juggernaut that is the Huskies responded with a three-pointer by Dangerfield, to the game at 89. In a season of buzzer beating shots, Ogunbowale delivered the shot heard around the world. She drains the two-pointer to launch the Notre Dame Fighting Irish to the National Championship. UConn was denied again an opportunity to return to the National Championship game. 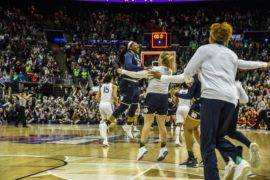 Jackie Young put the team on her shoulders and carried them to victory. Her points while the clock wasn’t running was the key to the game. She was 10-11 from the line, which was also a career best. While shooting 10-15 from the field including 2-4 from three-point range. Silently Young scored a career best 32 points enroute to the National Championship game. Arike Ogunbowale scored 27 points on 9-21 from the field including 3-6 from three-point range. 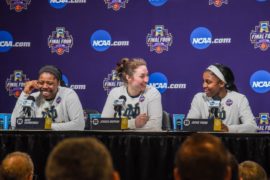 The Irish will play for the National Championship on Sunday evening at 6 PM EST against Mississippi ST on ESPN.

Congratulation ND Women’s Basketball on your win and best wishes in the National Championship game against Mississippi ST.