Humbled! That’s the best word I can find to describe the 2017-2018 Notre Dame Women’s Basketball team. You may ask why not use another adjective like extraordinary, magnificent, or outstanding? The answer is very simple. From my perspective, that is how I observed this team all season long. On the court, this team is all of those other words. Off the court, after all the fans had left the Purcell Pavilion, addressing the media in the press conference, the players were truly humble.

What they went through and experienced this entire season is what set this team up for the NCAA tournament and ultimately the National Championship. Game after game, week after week, practice after practice, the hard work of playing with a short bench and building up the endurance of playing extra minutes is what brought home that hardware. Most basketball teams would have just cashed the season in and said “we will get back at it next year.”

The tournament, like the regular season, is about the battle of the fittest. Only the strong survive and move on. This team was the fittest despite not having three of their scholarship players. The attitude of “focusing on what we have, instead of what we don’t have” made them mentally stronger as well. Those words did not just come from Coach McGraw, they came in interviews with Marina Mabrey, Jessica Shepard, and Jackie Young. This team is truly committed to the course that has been charted by Coach McGraw.  That commitment was displayed in each of the last three games this team played. 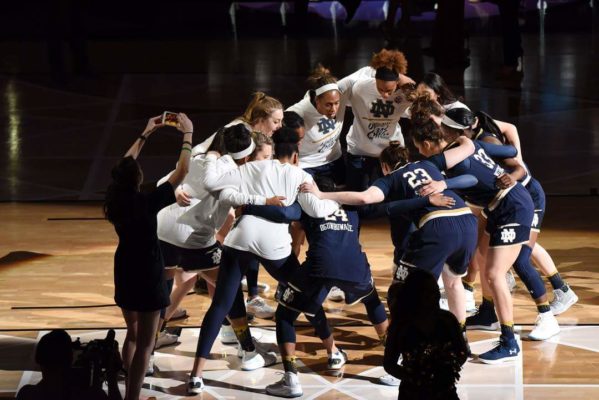 Let’s talk about Sunday’s game. The National Championship game was a combination of games we had already seen during the regular season. During the beginning of the first quarter the Irish set the tempo of the game. A stifling defense, an offense that was scoring as the opportunities presented themselves, along with an offense that was also showing some dominance. The Irish didn’t score in the final 1:10 of the first quarter. They also didn’t score until 3:08 left in the second quarter, and scored only three points in ten minutes of play.

That’s the moment in which I was reminded of a post game press conference in which Coach McGraw said “we went down to Louisville and got our ass kicked in and we really needed to respond, and I think we had something to prove tonight.” That was the press conference following the game in which Notre Dame came back from down 23 points to beat Tennessee.

Watching the team come out in the third quarter was like watching a team that just had just been refocused and pointed back in the direction of their goal. To win a National Championship, the team was going to have to come out with a fire in their belly. They needed to find the ability to pass the ball better, commit to play better defense, and play a lot looser. These were going to be the keys to an Irish  victory. The Irish came back to their top form. The defense was causing turnovers and scoring on the opposite end. The team was also scoring with the clock not running. The Irish were not going to let this game slip away. The entire team was contributing and doing their part. The Irish closed out the third quarter on a 10-0 run that lasted 3:30, and tied the game at 41-41 on a jumper by Jessica Shepard.

Quarter number four was about sustainment of defense.  Coach McGraw was rotating Kathryn Westbeld and Kristina Nelson in and out. Guarding Tearira McCowan was not an easy task. The 6’7″ Center was not having her way in the fourth quarter. Keeping fresh bodies on her gave the Fighting Irish an advantage. McCowan was not dominating as well as she had been earlier in the game and could not keep pace. She missed her last three jumpers. The Irish had worn her out. At 1:11 she committed her fourth foul and with :03 left in the game, she fouled out. That set the stage for the next play for the Irish. The steal by Jackie Young, that led to McCowan fouling out, allowed the Irish to call time out and set up one more play. With :03 remaining, the ball goes to Ogunbowale, and she dribbled and drained a game winning three pointer. 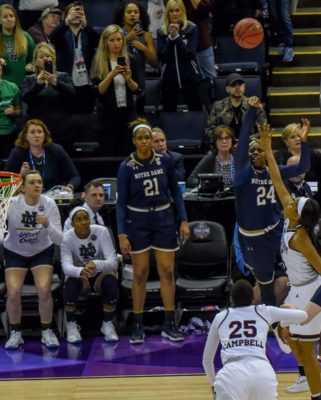 The shot was heard around the world! Clutch cannot even begin to define what Ogunbowale did at that moment in time. It was a team win, coupled by a group of individuals who refused to lose. That is what happens when you stare adversity in the face and accept its challenge. You win a National Championship! The icing on the cake is the fact that Coach McGraw won her 800th game as a Head Coach. 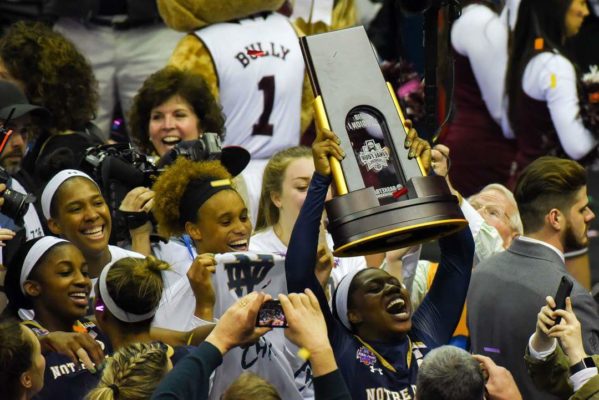