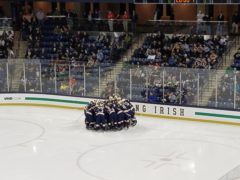 Some calm before the unknown storm
Photo Courtesy of George Bashura

Welcome to the B1G, Notre Dame Hockey Fans!!! Yes, the Fighting Irish of Notre Dame are no longer in Hockey East. Now in the B1G, the Fighting Irish will play Minnesota, Michigan, Wisconsin, Penn State, Ohio State, and Michigan State as conference foes, filtering through Compton Family Ice Arena by the end of February. Further, as announced on Monday, one of these conference matchups will be played at the United Center in Chicago January 21, 2018.

Let’s jump into this past weekend’s two game series against the Penn State Nittany Lions. Game 1 on Friday evening proved to be quite the battle between the Fighting Irish and the Nittany Lions. Goal scores will be mentioned but stats ruled Friday night and the stats for the first two periods will leave you asking what happened in the third period.

In the first period, PSU came out firing. They attempted 28 shots of which 14 were on goal including the first goal of the game at 4:39. The Fighting Irish were in a fight, spending most of the time on the defensive end of the ice.

The Irish lit the lamp on a goal by Bo Brauer at 11:55 from just outside the right face-off circle to tie the game at 1-1. However, the Nittany Lions were not done. They lit the lamp themselves one more time at 19:32. The Irish had 14 shots attempted, 7 of which were on goal. PSU literally had a 2-1 ratio on each category.

Andrew Oglevie scored from inside the right face-off circle to give the Irish their first lead of the night. PSU answered the Irish goal just 1:48 later to tie the game at 3-3 just before the period ended. Some quick math: PSU had, after two periods, 33 shots on goal to the Irish 15.

In the third period, PSU took 26 shots, with 10 shots on goal target, but the quantity didn’t match the quality as PSU scored ZERO goals in the period!

The Fighting Irish had 11 shots attempted, 4 shots on goal and Dawson Cook put the biscuit in the net at 11:41 to give the Irish the lead, followed by Jake Jenkins putting it in the empty net of PSU for a final of 5-3.

Folks, I am tired just writing about this flurry of action. PSU had 81 attempted shots and ND had 41,  2-1 ratio of shot attempts. The stats may not lie, but the Fighting Irish beat the stats Friday night. How Cale Morris stopped 40 shots on goal is beyond incredible. 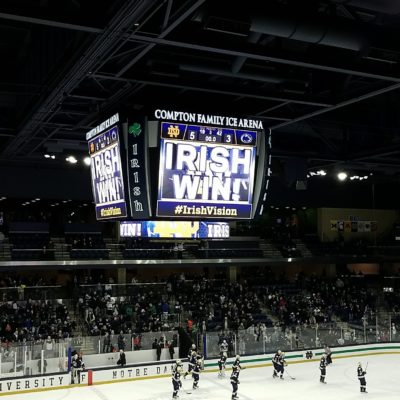 Huge come from behind WIN!!!
Photo Courtesy of George Bashura

The second game of the series was completely different. Both teams were a little slower in their skates after Friday nights deluge of shots by PSU. With the change of pace, the Irish appeared more ready for what PSU brought to the game.

PSU had their fair amount of shots on goal and attempts; however, the difference was that the Irish kept up with the pace of the Nittany Lions in this one. PSU had 24 shot attempts, 15 shots on goal. The Irish got their shots in as well this time around with 19 shot attempts and 12 shots on goal.

But the difference in this one was defense. No goals were scored by PSU this time around and the teams would finish period one tied at zero.

In the second period, the shots were fewer, but had a little Irish magic behind one of them. At 14:12, Bo Brauer found some kind of leprechaun dust on this stick blade and lit the lamp for the game winner in the second period just in front of the crease. Imagine that, after flurry of rubber thrown at the Irish net by PSU on Friday night, one goal in the second period was the difference.

The Irish defense stepped it up the remainder of the game and, as they say, “the rest is history.”

Your 3 Stars of the game were: 3rd Star PSU Peyton Jones, 2nd Star Bo Brauer, and the 1st Star Cale Morris, with a shutout on 33 saves.

This weekend the Irish travel to Troy NY to face RPI in a non conference game. The Irish record improves to Overall 8-3-1 and 4-0-0 in B1G play. Ranked #1 in B1G and #4 in both the USCHO.com and USA Today standings. 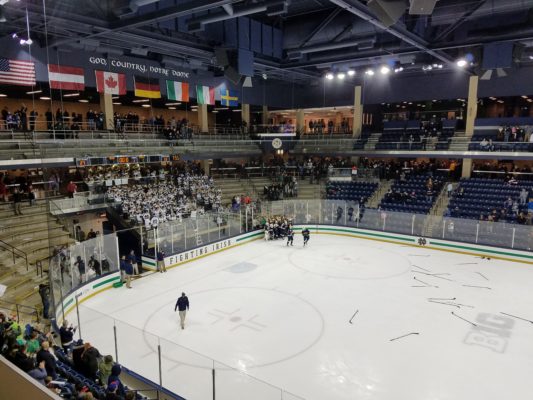