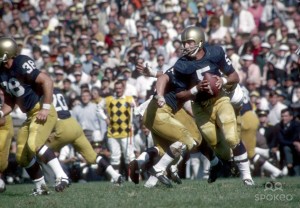 Ask 10 Notre Dame fans and you might get 10 different answers. Their opinion may be influenced by the player’s NFL performance or penalized for not living up to expectations.

I’ve developed a simple and easy formula to determine who was the greatest quarterback in Notre Dame history (minimum 10 starts).

I measure a quarterback by his completion percentage, his total yards, his yards per attempt, his touchdown percentage, his interception percentage and the number of fourth quarter comebacks. I also assign a bonus point for each national championship won or major bowl victory. (Sorry, fans. No points for a victory in the Ragu Tomato Sauce Bowl.)

You certainly could argue a different quarterback for each decade, but I believe it wouldn’t change the results significantly.

By averaging each player’s career, the following standard is developed:

Here’s how you complete the measurement. (No slide rule necessary!)

For yards, take a quarterback’s career yardage, average it and divide that average by 2,051. If their interception percentage is below 4.7, you add the difference to get their score to 4.7. If it over, you penalize the player by taking the different out of their final score. 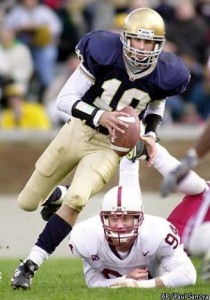 I’ll show you how the formula works by using a player outside the Top 10. Some of you may recall Matt LoVecchio, a starter during the Bob Davie era. Matt came in and helped lead the Irish to a Fiesta Bowl berth, during which the Irish subsequently got pummeled. (This foreshadowed that Davie was probably better off at ESPN or at New Mexico.)

Remember to divide each of his numbers versus the standard and then add the totals together. Then to arrive at his final score, divide it by the number of categories (six).

My baseline score is 100, so a 64 is a below average rating for a Notre Dame quarterback. I didn’t compile this project to highlight below average play to conjure up memories of the somewhat lean post-Holtz years.

So here are your Top 10 signal callers in Notre Dame history: 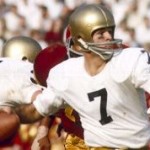 Huarte was a one-year wonder in Ara’s first year, guiding the Irish to a 9-1 mark and narrowly missing the National Championship. He went on to the win the Heisman. 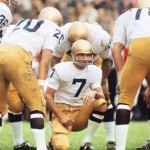 One major bowl win to his credit and a somewhat high interception percentage keeps Joe further down in the ratings than some may agree with. 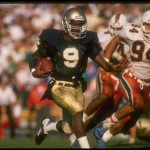 Rice was the last quarterback to pilot the Irish to a national title. He also has a higher winning percentage than anyone on the list. 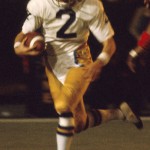 Clements has a national championship and a major bowl victory to his credit, but not much in the way of passing numbers. Again, some may argue/question if his placement is too low. 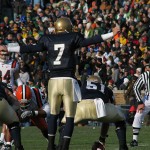 Only quarterback with a losing record on the list. Clausen has incredible passing numbers. To be fair, a leaky defense and questionable decision making by Charlie Weis probably cost him several wins. 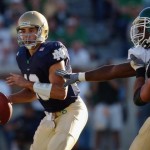 I loved watching Brady Quinn play. Quinn has the most starts on this list, with standout signature moments against Michigan State and UCLA. 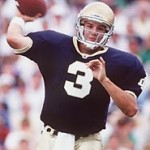 Although much maligned by press and fans alike, numbers show that Powlus had a more than solid career. Detractors will point to his zero bowl wins. Powlus authored seven fourth quarter comebacks during his career at ND, the most on this list. 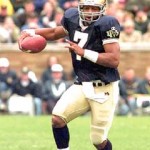 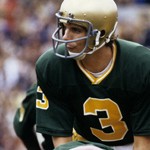 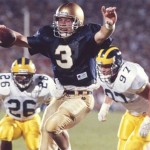 The passing numbers combined with bowl victories place Mirer at the top. Some will point to his poor NFL career. For this list, it is irrelevant. (But he makes a pretty good bottle of wine!)

Some may argue that they don’t like the standard being used or with the results. What I’ve simply done here is use numbers to attempt to quantify rankings rather than anecdotal evidence or the blatherings of beer-fueled relatives at a summer cookout. I placed no bias into the rankings the numbers are the numbers. For what it’s worth, my childhood favorite Steve Beuerlein rates a 78 — sadly missing the list.