Championship hockey! There is nothing better than putting it all on the line for a chance to play in a championship game. Saturday night was no different. The #4 seed Ohio State Buckeyes were back at Notre Dame to take on the #1 seed Notre Dame Fighting Irish for the B1G Conference Championship title. The inaugural season for the Fighting Irish in the B1G had come to a climax. All that was missing was the whistle and a puck drop to get the evening underway. 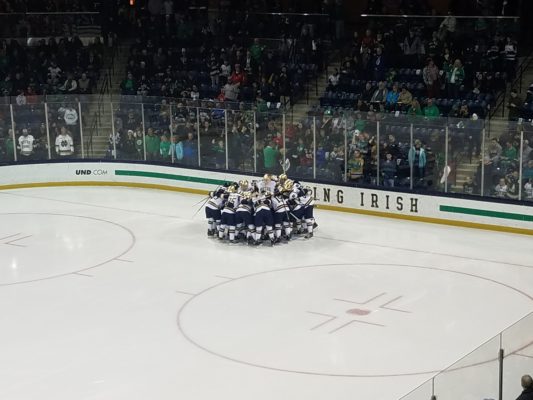 The capacity crowd of 5,515 were waiting to see the (24-9-5) OSU Buckeyes go to battle against the (25-9-2) Fighting Irish. The Buckeyes had reached the championship game by defeating the Michigan Wolverines 3-2 in overtime the previous weekend.

Early on in conference play, the Fighting Irish had all the right moves. Crisp passing, good puck handling, great defense, and established control offensively and defensively early in their games. Saturday night’s first period was a reflection of that. The Irish lines were skating hard and fast. They had an objective to complete. The opening moments to the game was more like a “shake the nerves off” period of time. Those emotions changed rapidly. From the glove side of OSU goalie Sean Romeo, Bo Brauer put a laser on net and scored the first goal of the game. Compton Family Ice Arena was alive in a big way. Irish fans love it when the Fighting Irish score first, especially in a big game like this.

Despite taking the lead early, the Irish were defending the lead, another early season trait. But the Irish were not done. At 14:30, Matt Hellickson hit the post and the puck got by Romeo from the glove side on the power play, giving the Fighting Irish a 2-0 lead. The Irish were playing in dominating form.

The anticipation of those in attendance, cheering for the Irish, was at a fever pitch as they hoped for a repeat of the first period. The OSU fans were thinking the complete opposite. They knew if the Irish continued to play the way they did in the first period, it was going to be a long evening. They started out strong, working on the momentum from the first, but the winds of change started to blow and not in the Irish’s favor. The Buckeyes launched a quick flurry of shots on their offensive end of the ice. At 6:21, Brendon Kearney silenced the arena just enough to hear the cheers of the OSU fans in attendance as he scored the Buckeyes first goal of the game in front of the crease, bringing the Buckeyes within one.

All of a sudden the Irish seemed to go flat, as OSU continued to fire shots on the Irish net minder Cale Morris. The Irish were falling into the spot in which they were in the waning part of the season. Struggling to stay out of the constant defensive mode as if they were on a continuous penalty kill.

The second period was the set up for the third period. Momentum continued to go the way of the Buckeyes. It didn’t take long for the Buckeyes to put the game tying goal on the board. The Buckeyes Matt Miller, put a one timer on Cale Morris to bring the game to all even at 2. OSU continued to dominate the Irish through the remainder of the period. The one thing the Irish had going for them, at that point, was that they never gave the Buckeyes a man advantage, and played penalty free hockey in the third. The Irish seemed to have gotten their legs back late in the third period. That was a good sign because with the game ending in a tie, there was going to be some “free hockey” in the form of “sudden death.”

And take advantage they did. The Irish came out on fire. They were back to what they looked like at the beginning part of the season. Crisp passes, great defense and crashing the net. That combination all came together at 9:23 in sudden death. Jake Evans drew in the defenders, passed it to Cam Morrison and GGGGOOOOAAALLLLLL!!!! The Irish win 3-2 in sudden death to with the B1G Conference Championship in their inaugural season. 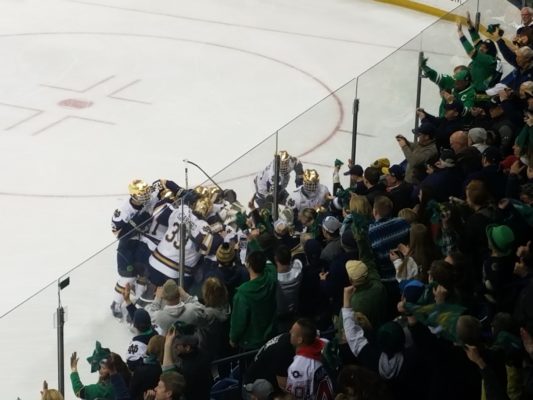 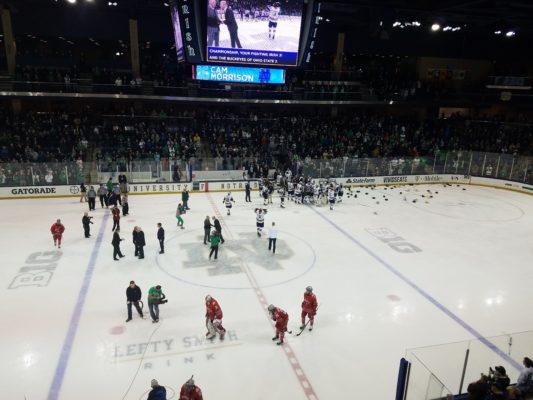 Along with the B1G Conference Trophy, there were some other awards to give out.

Your Fighting Irish will travel to my home state of Connecticut, in which they are the #1 seed, and will take on Michigan Tech at 3 PM on ESPN2.