Let the ACC Conference season begin! Thursday night, the Lady Irish opened up their 2017-2018 conference play on a night that saw the outside the Purcell Pavilion transform into a snow globe. “While the weather outside was frightful”, on the inside, there was excitement to see the Irish take on the Syracuse Orange, coming into conference play with a 11-1 record and Syracuse with a record of 11-0, ranked outside the top 25 in the Women’s AP Poll.

A question circulating on press row before the start of last game was whether or not Jessica Shepard would suit up and play in the conference opener against Syracuse due to her ankle injury. That answer became apparent when Jessica came out to floor for pre-game warm ups and with her uniform on. Now the question would be whether or not that ankle would hold up throughout the game. Another question floating around the press area was how will Jackie Young perform with a new protective mask. 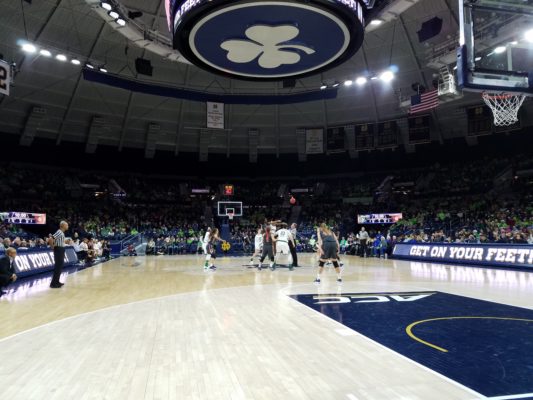 Lets Get This Game Started

But beyond those two, the Lady Irish were looking for a way to get some momentum going in the first quarter as they struggled on the offensive glass. Zero second chance points showed that offensive rebounding was a difficult task early in the game. On the other end, ‘Cuse had six second chance points along with ten points in the paint. The Lady Irish gave a 15-6 lead as ‘Cuse went on a 9-0 run. At the end of the quarter, the Irish would go on their own 5-0 run, taking a 20-15 lead.

The second quarter saw ‘Cuse turn on the defensive pressure using a man-to-man press, as well as a half court press. They also continued to score on second chance opportunities. The Orange had the offense and defense working and at moments the Lady Irish had a struggle to stop them scoring and prevent them from retrieving the rock off the Irish offensive board.

The Irish were out rebounded 27-17 and the Orange had 12 second chance points, while the Irish had 11 points off of turnovers. The Irish scored three points off the bench, which ended up being quite important as the Irish nursed a 42-38 lead into halftime. Jessica Shepard led all scorers with 11 points at the half.

Early on in the third quarter, Syracuse Coach, Quentin Hillsman, got a technical foul for his constant riding of the officials on the floor, which started from the moment the game tipped-off. However, the technical foul seemed to fire-up the Orange as they continued to out-rebound the Irish on on both ends and finding the offensive basket.

The basket seemed to shrink for the Irish for a period of time. Shepard was working the offensive glass, but had some trouble with getting the ball to get in the basket. The Orange, with their defensive and offensive play led by Tiana Mangakahia, brought the ‘Cuse from a deficit, to a tie and then a lead.

Late in the third, the Lady Irish went on a 10-0 run and regained the lead for good with help from Ogunbowale, Shepard, and Young. The Irish ended the quarter with a 64-58 lead over the the Orange.

The Irish did not look back and controlled the ball for the remainder of the game. The Irish defense tallied 7 defensive rebounds and only allowed the Orange to score 14 points during the fourth quarter. Jackie Young contributed with eight points and Kathryn Westbeld contributed with six points in the quarter.

The Lady Irish went on to win their ACC opener 87-72. Jessica Shepard led all Irish scorers with a double-double, 24 points and 12 rebounds. Next was Jackie Young, who has come back from mask issues had 23 points, 2-4 from three-point range and 5 rebounds. Wrapping up the top three was Kathryn Westbeld who was just short of a career high 17 points with 16 points including 3-3 from three-point range and 5 rebounds. 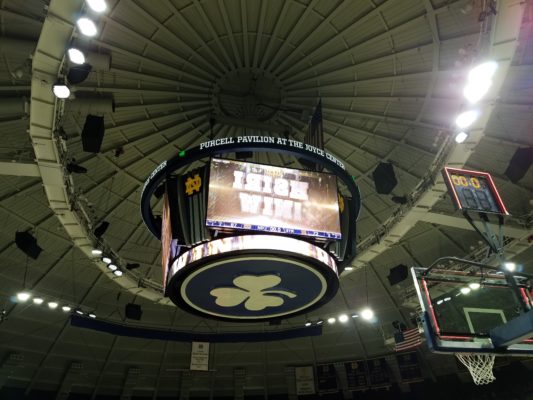 The Irish Win Their ACC Opener

In the post game interview, Coach McGraw was asked what she saw in the second quarter that she liked. She responded, “We were running. We were making shots, attacking and taking care of the ball.” Coach also praised Jackie Young for taking control.

I asked Coach McGraw about Tiana Mangakahia of Syracuse and how she prepares for similar players down in the ACC schedule. Coach McGraw responded “We have to do something different. We obviously couldn’t guard her today. We need a little more help. We need to be able to guard her man-to-man, through ball screens and every time they set up a screen we ended up with match up we didn’t want. So we need to come up with some new ideas and we have some already. She is a spectacular player and she did everything she could to help her team win.”

The Lady Irish go on the road and play a New Years Eve game against Wake Forest at 1PM EST. Good Luck ladies and #GoIrish