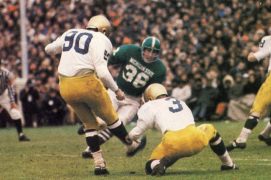 The “Era of Ara” was off and running as the Irish entered the 1966 season.

The Irish entered the 1966 season ranked #6 and would eventually grab the #1 ranking after a convincing 38-0 win over #10 Oklahoma on Oct. 22. They would carry this ranking into their Nov. 19 showdown against #2 Michigan State with a national championship on the line.

The Irish would face numerous challenges as they took the field in front of 80,000+ and 33 million national television viewers. For example, the Spartans had one of the greatest defenses in the history of their program. They had not lost at home since October of 1964 (vs. Michigan) and the Irish came into the game battered as they would play without their starting running back Nick Eddy.

During the game, the situation continued to worsen for Notre Dame as starting quarterback Terry Hanratty was knocked out early along with All-American center Bob Goeddeke. Eddy’s replacement, Bob Gladieux, was also later sent to the sidelines with an injury. (“My quadriceps muscle was splattered into hamburger meat & my thigh pad busted into four pieces,” Gladieux would recall years later.)

In a game that will be remembered for conservative play and thunderous hitting the Irish fell behind 10-0 in the second quarter. The Irish would rally, narrowing the gap to 10-7 before halftime and eventually tying the score on the first play of the fourth quarter.

With 1:24 remaining, the Irish would get the ball back with a chance to break the tie. After four straight running plays to net a first down, the Irish were sacked on their only passing attempt on the drive. On the following play, Parseghian instructed his quarterback to simply run out the clock thus ending this epic in a 10-10 tie.

To this day Parseghian is criticized by many. However, his logic was sound. He understood that the only way the Irish could lose the national championship was to lose.

Michigan State was ineligible for a bowl game (The Big 10 did not allow the same team to go to the Rose Bowl in consecutive years) so they were playing their final game of the season. This would not be the case for Notre Dame, as they had one more chance to state their case that they were worthy of being #1.

The following week Notre Dame smashed #10 USC 51-0 to clearly and unequivocally state their case that they were indeed #1. The pollsters agreed. On Saturday, the Irish and Michigan State will celebrate the 50th Anniversary of this epic clash. ESPN or some other network will rehash the game leading to a new generation of talking heads that will debate and criticize Ara’s decision. What cannot be debated is that his decision resulted in a national championship for Notre Dame.