Brian Kelly is taking his show on the road.  Specifically, he’s taking his team to beautiful Marion, Indiana, to start the season’s practices.  In addition to being an exciting change of venue for the lads, Shiloh Park evidently offers something the University of Notre Dame, in all its glory, does not: A Challenge Course.  And I was of the opinion that all of our courses were challenging.  As it was explained to me, a Challenge Course is used in team-building exercises.  And I was of the opinion that recruiting, coaching, and pregame Mass were the keys to team-building.

This Challenge Course has such amenities as climbing-walls and zip-lines.  I though climbing the walls was what all our students did when the snow piles up during winter, and especially during finals week.  And as for zip lines, I’ve seen those used by the lads in Morrissey when trying to access Lyons and Howard for post-parietal trysts.

This whole team-building and Challenge Course thing baffled me to the point that I took up the issue with some of the students on campus for the summer.  As they tell it, certain parlor games build camaraderie and a spirit of interdependence among members of a group.  They gave me some examples of these games – to which I responded, “Pantywaists!”  I then proceeded to explain how team-building games were played in the 1880s, when men were men, fire burned hotter, and we started playing a little game called football without pads or helmets.

Leap of Faith – You climb up a 40-foot tall tree, stand on a platform and jump for a hanging ball.  You’re attached to a rope that will prevent you crashing to the ground in an indecorous heap.  People hold the rope and lower you slowly after you tap the ball.  When we did this, we called it “Zahming” and there was no rope of any sort involved.  You build your own wings or glider, climb to the roof of a tall building and chuck yourself off to see if you can fly.  You can’t.  But you’ve got guts for trying.  There’s a team involved too – they scrape you up and take you to in infirmary.  Good fun. Trust Fall –  Your team stands behind you and forms a hammock with their arms.  You close your eyes and fall backwards into their hands.  Whoa, tough!  Try this: You take a senior about Louis Nix size, and a freshmen small enough to wedge in the prow of a crew skull as a coxswain, and the senior falls backwards for the freshman to catch and hold and lower to the ground gently.  That’ll teach trust on both sides – and both of them will learn how to take a jarring hit.

Three-Legged Run – Two partners stand next to each other and tie one left leg and one right leg together; they then try to run.  Most people attempt to match the partners in height and build.  We did nothing of the sort.  We took a running back and linebacker, tied them together (you’ll need leather thongs) and then loosed a feral dog after them.  The linebacker learns how to run, and the running back learns how to drag great weight while staying on his feet.  And so damn funny to watch.  (N.B. Keep a desk chair and a bull whip on hand to corral the dog before it does any real damage, and then return it to Ann Arbor whence it came.)

Dizzy-Izzy – Take a baseball bat and stand it upright on the ground.  Place your forehead on the pommel of the bat and run yourself in circles several times.  Then stand up and try to run to your partner across the field.  Cute…for children.  Here’s how we did it.  Forget the bat. Go to the top floor of the Main Building; place a large washing tub on a wheeled mover’s dolly.  Fold a lad in half at the waist and shove him butt-first into the tub.  Have several other lads spin said tub so fast that you can no longer distinguish the facial features of the fellow sitting inside.  Pull him out, give him a bone-china statue of The BVM to carry in both hands, and shove him toward the stairs.  He has to negotiate all ten flights of stairs down to the ground floor without falling on God’s Mother.

Pin the Tail on the Donkey – Real ass.  All riled-up.  Big maize M painted on its hindquarters.  Real pin.  Suitable for holding an elegant lady’s hat on her head in a high wind.  You know what to do – give the M a goatee.  If you’re not lightning fast, I hope you can take a good swift kick to the head, neck, chest, or crotch.

My student interlocutors also informed me that they, too, engage in team-building games in their halls.  Again, these are but shadows of the Nineteenth Century versions. 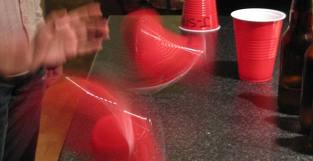 Beer Pong – A number of plastic cups with a mouthful of suds are placed in formation at both ends of a table.  Two participants try to throw a small, light ball into any of said cups.  If the ball lands in a cup, the fellow standing by those cups must drink the contents.  Back in Brownson Hall, the lads did it a little differently.  Glass schooners were lined up at opposite sides of a room on the floor.  Most were filled to the brim with lager; one was full of Mishawaka home-distilled hooch.  Standing in fixed positions (from which they could not move) two lads took turns trying to land a sizeable rock in the schooners.  If the rock struck home, the lad on that side had to drink the remaining beer, including any broken glass in the fluid.  He then hurled what was left of the schooner at his opponent who only had a Jerusalem Bible in his left hand to serve as a shield.  If the rock landed in the moonshine glass, the lad hoped for complete breakage; if not, he would forfeit the game if he landed on his remaining schooners as he went face-first into the floor. 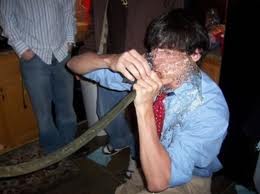 Flip-Cup – Two teams stand on opposite sides of a table, with a brace of plastic cups for each.  The cups again contain a dash of beer.  The teams race each other to see which group can inhale the beer and flip the cups over fastest.  So very quaint.  After we opened Sorin Hall, they played something similar called “Flying Buckets.”  Same idea, only metal milking pails were used instead of cups, they were topped-off with stout or porter, and when you finished your vat of beer, you had to land it squarely on the head of the opponent across from you.  Sewing kits were kept on hand for rudimentary stitches, so that the game could continue indefinitely.

Keg Stand – I’m assured this only goes on off-campus.  And it’s fairly simple.  Two to six fellows hold another upside-down while he snakes a tube into his mouth, that shoots high-pressure beer into his belly like a fire hose.  He must do this for a count of ten.  The “Still Stand” was roughly the same, just with bathtub Gin shot through a fully charged blacksmith’s bellows.  This was also not performed on campus, but rather next to the convent housing the nursing nuns who had seen service in Civil War field hospitals.  It saved travel time with unsuccessful participants.

Whatever the result of the team-building with ropes and pulleys down in Marion, I’m sure the football lads will return to campus ready for another undefeated regular season.  Alas, I don’t think they will ever be ready for our old-fashioned 1880s team-building games.  But that’s probably a good thing. 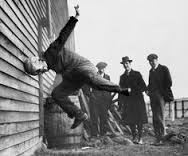