This weekend, Notre Dame Seniors will enter the Stadium where they never saw their team lose this season.  But they won’t be cheering for just another football victory.  They’ll be cheering for a far more important victory – their own graduation.  Keep in mind: football is a nice touch, but our whole purpose here is the education that culminates in graduation.  And that’s why more of our football players graduate here than anywhere else (and by “more” I mean very nearly every single one of them).  So it is fitting that victory be laid on top of victory by conferring degrees in the 360 degree arena of triumph known as Notre Dame Stadium…until they change it…again.

I know change doesn’t go down well here.  It never has.  But somewhere there seems to be written a list of things that can never change because of that equally elusive value called tradition.  I will now shatter a few ill-conceived, though perhaps cherished, notions about change and tradition with respect to things on this campus.  Shall we start at the beginning – yes, we shall. 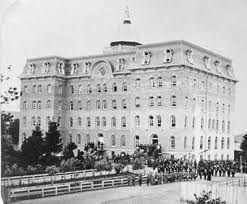 My Log Cabin.  These days, that ramshackle old hovel where I sheltered from the blinding (literally) winter of 1842, is reverently called the Log Chapel.  Sure, we made it a chapel, after we built a suitable, modern building.  Believe me, there’s nothing that can’t be turned into a chapel, and no building is complete without one.  But the cabin was not my creation; it came with the property…and there was a reason Steve Badin was only too happy to be rid of all of it.  So every time you genuflect going by the cabin-chapel, remember that it’s an outbuilding I moved out of as soon as I could.  Oh, and it’s not real.  The original Log Cabin burned down, just like so many things here.  What you’re looking at is a replica.

My Old College.  That’s what it’s called now.  When I built it is was just The College, whole, entire, and complete.  It was basic, utilitarian, and constructed with absolutely no eye toward architectural beauty.  And it shows.  It probably should have been torn down at some point for the sake of reusing the bricks in something better.  But it’s built like a brick sh outhouse, so there was no sense in getting rid of a perfectly serviceable building.  Still, I’m sure the lads who live in it now would agree with the outhouse analogy on more levels than one.  Its floors slope at various angles in every direction; the doorways are low and trapezoidal; and it creaks and groans like a tramp steamer hung up on a rocky shoal.  Yes, our little carbuncle called Old College is what Notre Dame originally looked like.  How do you feel about change now?

My Sacred Heart.  Well, it’s Jesus’ Sacred Heart, but my church.  Again, not the original.  Check the cornerstone – it says 1871.  Did you think I had no church between 1842 and 1871?  And the Lady Chapel is an addition.  When The BVM says She wants a place of Her own, you build it, even if you have to add it onto the back. 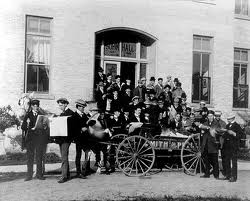 My Main Building.  Everyone knows it’s not the original.  It’s actually the third.  Like it?  Most people do.  But it didn’t come with a Dome.  That wasn’t added until three years later.  And it wasn’t Golden until three years after that.  Again, when The BVM says She wants a giant gold footstool, you do it.  Remember, too, that the Main Building was offices, classrooms, dining hall, and dormitories all in one.  Change is a blessed thing when you can move a horde of raucous and pungent college lads out of your office.  Which brings me to…

My Hall.  The luxuries I gave my lads!  A standalone dormitory with private rooms!  I had already given them electric lights – first college in the country using that exciting modern science (really, I’d do anything to get away from open flames).  But My Hall, which now thinks it’s a college…fine…does not appear in its original form.  The wings are later additions so we could pack more bodies in there.  And the porch came even later than that.  The porch was built onto the front to prevent the lads from dumping buckets of water out the upper windows and onto unsuspecting victims entering through the main doors.  No joke.

The list could go on; but let’s focus on the thing at hand – the Stadium.  Built in a rush (as so many of our building have been) it was elegant in its own way.  But just ask my esteemed successor Ted Hesburgh and he’ll tell you the Stadium was unpopular just 30 years after its opening, by which time it was considered antiquated, undersized, and crude.  Ted considered demolition and reconstruction (a fire is much cheaper), but he had priorities: First a Library, and then Ned Joyce’s sports big-top.  So the Stadium survived until it was encased in a concrete shell that can never be called elegant in any way.

Onto the Stadium we now want to add offices, classrooms, dining facilities, and something called “luxury boxes” which is precisely what I called the private sleeping rooms in Sorin Hall when we built that.  So it will be just like the Main Building was originally.  We are returning to tradition!  But traditionalists aren’t happy because at Notre Dame there is a pervasive confusion between “custom” and “tradition.” Custom is the way things are generally done, and have been done for a while.  Tradition is a collection of customs that have been handed on from generation to generation and age to age, so that they have become freighted with deep, symbolic meaning.  Customs change; traditions endure.  Anything that changes over time is, therefore, a custom.  Something that has never changed is a tradition.  And there are no such things as new or recent traditions – unless you’re talking about oxymorons.

Furthermore, we’re talking about THINGS here.  Buildings are things, and things cannot be traditions.  They can be old or beautiful or relatively unchanged for many years.  But they’re still just things, and we do not place inordinate value in things.  I was upset when my second Main Building burned – but I built a better one.  And then I installed electricity.  And recently, they entirely rebuilt the interior.  That sort of change is called progress.  This place started with someone else’s log cabin – but look at it now!  Since it’s summer, we’re going to build even more buildings that I never thought of.  So I suppose you could say it’s a custom at Notre Dame to preserve its older buildings; but one of our most cherished traditions is progress. 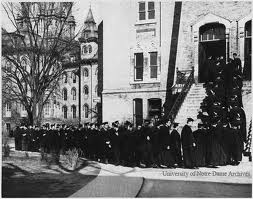 Do what you want to the Stadium.  It was already changed once.  And it’s just a thing.  Victory is a tradition.  We have preserved that tradition on Cartier Field and in Rockne’s original and into the current Stadium-within-a-stadium.  But the greater victory, the tradition of graduation, we have preserved even longer…on the Main Quadrangle, in Washington Hall, in the Fieldhouse now gone, in the Stadium, on the South Quadrangle, in the Joyce Center, and back in the Stadium again.  The location is just a custom; the graduation is a tradition – and a glorious achievement.  Congratulations, Seniors!  And be prepared: Notre Dame will have changed by the time you come back.  It always does.