Everyone hates the injury bug — it’s the unavoidable bearer of bad news that bites teams every year no matter how hard they try or how diligent they are.

And for the Irish, it didn’t take long for that bug to strike in 2013. Saturday was the first practice in pads for Notre Dame, and two players who are all-too-familiar with the injury report found themselves listed on it yet again — running back Amir Carlisle and defensive end Chase Hounshell. 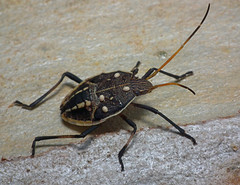 A close-up of college football’s greatest villain — the injury bug.

According to Keith Arnold of NBC Sports, Carlisle suffered a broken collarbone after a fierce collision in practice. Carlisle missed last season with recurring ankle injuries, but had been drawing rave reviews from Coach Kelly in off-season workouts and the first few non-contact practices. The collarbone injury, while not a minor one, is likely to only keep Carlisle out for the spring. However, it has led our very own The Biscuit to question whether or not Carlisle is made of glass.

The injury to Chase Hounshell is a little more disconcerting. While Kelly has yet to speak on the injury (that will likely come next week after Easter Break for the Irish), it appears that Hounshell has another injury to his shoulder, though it is unclear if it is the same shoulder that has previously held him out.  As Arnold indicates, some sources believe it may be a torn labrum for the defensive end, which would certainly not be good for the rising junior.

Here’s what Hounshell had to say about it:

I've worked too hard to come within arm's reach of the prize only to have my hand cut off just before I seize it.

While this batch of news isn’t particularly thrilling, injuries are bound to happen at some point, and hopefully these occurred early enough that the staff can take care of them before we really get rolling. Here’s to hoping that everyone else can stay relatively healthy as they move forward in spring practice.