Never before in my lifetime have I been so happy to see a non-Notre Dame team win a college football game. I know I’m definitely not alone in that regard.

And I guess it also goes without saying, there hasn’t been this much excitement since long before any current students ever hit Notre Dame’s campus. Hell, most of the freshmen weren’t even yet born for the 1993 season.

By now, it’s obvious that the temperature of campus is red-hot — and I mean red, blazing-fire-the-size-of-Jupiter hot. The students can smell blood and know that a BCS National Championship berth is there for the taking. Oh, and the fact that we should get to curb-stomp our biggest rivals beforehand doesn’t hurt the anticipation either.

But it’s so interesting because the cause for jubilation among the students wasn’t even the Notre Dame win on Saturday, after finally answering the bell that was calling for style points and turning in our most dominant performance of the season. It was the loss of a mid-level Big 12 team (although obviously not this year) and a win by one of our foes that is building an ever-increasing rivalry with us. 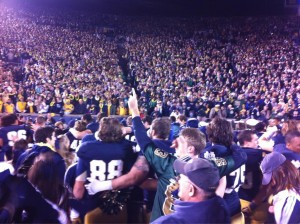 Hey, sometimes rules get bent when championships are on the line (at least ours were just fan loyalty rules, not the real rules that Ohio State broke that are withholding them from a championship matchup with us).

All of this led to an incredible scene on campus that night by Stonehenge:

Yeah, I think the student body is behind this team.

Even the bars were a crazy scene Saturday night. Lines were hundreds of people out the door at both CJ’s and Finny’s and there were more than a few drinks back thrown back in celebration (even a few bottles of champagne were popped and sprayed everywhere — hey, it’s been a long time coming). In fact, one of the coolest scenes of the next occurred when the Notre Dame highlights came on the big screen at Finny’s and the music was turned off completely. Every single student in the bar turned and watched, and the great “We Are ND” chant that echoed off the walls could probably be heard by the Trojans in Los Angeles.

The next day, the jubilation never ceased. In fact, the discussion turned to a new question among the students: how will the student ticket allotment work and how can I ensure my spot in Miami?

See, word got out that last year Alabama only allowed their seniors to buy tickets to the BCS Championship game. And Notre Dame students are panicking that they might not a chance to see this team in action.

For the 2007 Sugar Bowl Notre Dame was given an allotment of 17,500 tickets. Of those, 2500 were put in a lottery for Notre Dame students, and another 100 were made available to Saint Mary’s girls. Roughly 80% of the students who entered the lottery received tickets at a $125 price (although this year’s title game face value is estimated at $350),  and furthermore there was no priority given to any particular students.

Now, if Notre Dame does indeed beat USC and head to the Championship, there will undoubtedly be a record demand for tickets among the students, but most of them who wish to go will have the opportunity to do so. Notre Dame is expecting to receive 2500+ tickets for the students alone this time around.

All I can say is, pack your bags, we’re going on a trip. Good luck to anyone trying to get tickets to Miami, and I’ll be fighting with all of you guys as well. We are #1 and plan to keep it that way.