If you recall, this spring I unveiled a post called “Taking the Temperature“. The idea for the post is simple — it’s a gauge of how the students on campus are feeling about the team and its prospects moving forward. Now, with a bye week on our hands, is a perfect time to discuss how everyone is feeling about our 4-0 Irish team.

It’s very interesting, because at 4-0 you would predict that the only feeling on campus would be one of invincibility — and “red-hot” would be the only way to describe the temperature on campus. However, even in the extra-optimistic Notre Dame bubble (which is what I describe the students as being in), the best I can do is call the Irish is uncomfortably humid — and here’s why:

In the spring, most Irish fans — and students as well — were predicting a very safe 8-9 win season for the Irish. Mainly for this reason:

The most obvious reason for the lukewarm-ness right now is the lack of resolution at the QB spot. If there is one thing any sports fan fears, it is lack of direction for their team. And when your team can’t point to any one guy at the quarterback position that is ready to take over and lead, you are certainly perceived as lacking direction. Deciding on a quarterback is the first step into raising win expectations among the fan base. And the truth is, it doesn’t even matter who takes ownership of that spot. For example, I strongly endorse Tommy Rees for starting quarterback. But if he were not chosen to start, I would assume that is because another guy took his game to another level and is capable of playing better football than Tommy, plain and simple. Once a guy is decided upon, fans stop viewing his negatives (why another guy should start over him) and start focusing on what positives the starter can bring to the table.

When I made this claim at the time, I had absolutely no idea that we would still have QB uncertainty midway through the season (this was before Tommy’s arrest, too). I was hoping and expecting that one guy — whoever that was — would elevate his game and take ownership of the starting role. But apparently it’s an issue that we are going to battle the whole year. And to me, that’s still the single most glaring reason for why fans aren’t supremely confident in this team heading to the national championship. 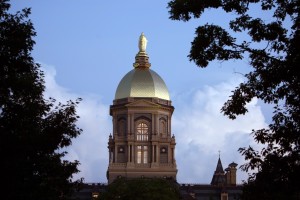 There’s some sun shining on the Dome right now, but it isn’t blinding everyone — yet.

It’s clear that we still have some kinks in the offense that need to be worked out. Not just at quarterback, but the offensive line and running game as well. All three of those positions/groups have shown flashes of potential, but just haven’t quite put it all together yet. And until that happens, people aren’t going to buy in.

However, the defense is for real and this 4-0 start is not being taken for granted. No student on campus has ever had this type of optimism heading into October (sad but true). If the team comes out of the bye week and showcases some offense versus Miami — which everyone is pretty hopeful for — it will be game over. The hype machine will be full-go for the Irish down the stretch, and having the students believing 100% down the stretch will be huge for the home atmosphere, particularly in the games versus Stanford and BYU.

All in all, there’s a good, but not quite great feeling about this team moving forward. Maybe the older students are a bit jaded because of the collapses they’ve seen in the past, but the younger blood is ready to proclaim this as an elite team. Hopefully, in a few short weeks, we’ll have everybody on board.