Home > Debate THIS! Why Theo Riddick Could Be Better Than Cierre Wood

Even here amongst the HLS team, (maybe especially here would be a better term) we are always debating things about ND football. Here’s an actual conversation that occurred between the team members on Monday:

Me: You know, I think I want to write a piece on Theo Riddick and how he’s set to explode this year. He may even take Cierre’s starting spot fairly early in the season.

Biscuit: Uhh, I don’t see that happening at all. Let’s make it a Debate THIS! Give me the counterpoint, and prepare to go down, GrantlandX.

Me: Alright, you’re asking for it, I’ll go for my third Debate THIS! victory in a matter of months, you’re on.

Twibby: The only rational explanation for him taking Cierre’s spot based off what we’ve seen to this point is that you expect to see Cierre get hurt. In that case, you suck.

Tex: Third victory? HAHAHAHAHAHAHAHHAHA. Oh man, that was good. But, feel free to try and explain how Theo will replace the first 1000+ yard rusher that ND has seen in over a decade. I just feel sorry for your future evisceration.

So, besides the fact that Tex was partying too hard as a football manager to remember Darius Walker eclipsing the 1,000 yard mark twice, we have another debate on our hands; let’s do this.

Theo Riddick has been a better player than Cierre Wood since the first day they both started their freshman year. Cierre was the more highly touted recruit, checking in as the #76 overall prospect according to Rivals, while Theo could be found at the bottom of the Rivals250 at #242 overall. But as we all know, recruiting rankings cease to matter the second a recruit leaves high school.

Despite not being as highly regarded as Wood, Riddick was the running back that managed to get time as a freshman. He was more physically prepared at the time, and showed great instincts; at least enough where Coach Weis thought he could contribute right away. While he only received 29 carries that season, he did rush for 5.5 yards per carry while Cierre was sitting on the bench. 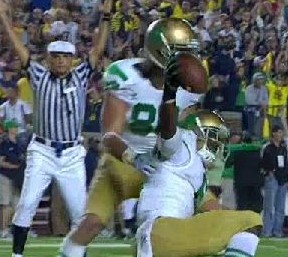 We thought Theo scored the game-winner versus Michigan in 2011.

Then Cierre broke out in 2010 and had a fantastic year in 2011, running for over 600 and 1100 yards respectively. He ran for exactly 5.1 yards per carry both years. That’s awesome consistency. Meanwhile, Kelly moved Theo to the slot receiver position where he caught 38 balls one year and 40 the next, for roughly 400 yards each season.  But why did Riddick get switched? Even though he was a better runner than Cierre (at least more ready freshman year), he also had better hands and more versatility — it was a move that fit Notre Dame’s needs, not necessarily Riddick’s best abilities.

Even as a receiver, you can tell that Riddick is a natural running back. He’s shifty, has every move in the book, and really tries to make people miss. Putting him back in the backfield is a great decision by Kelly in my opinion, and something even Theo acknowledged. He recently told Irish Illustrated that he was in favor of the move:

“I came in as a running back, I love the position. Just to have the opportunity to go back there and display the talents that I thought I always had was very exciting. I want as much as they can put on my plate. It’s my senior year. I wanna go out on top. With that being said, I’m just trying to do the best I can.” ~ Theo Riddick

Which brings us to a major point: this is Theo Riddick’s last chance to showcase his talents for the NFL. Senior year tends to really refocus players that have a chance to head to the league. They are motivated to go out as a winner, and they also know that if they are to continue football as a career, they have to come up big. They put in the extra time in the weight room, finally listen to the coaching staff 100%, and quite often they reap huge benefits as a result. Jonas Gray last year was a perfect example of this.

Riddick fits this exact mold. I have been on campus all summer getting the inside scoop for HLS, and there is seriously one observation that has stood out the entire time, and that’s that Theo Riddick is in absolutely phenomenal shape right now. He was always strong, and a physical specimen. But he packed on about 10 more pounds to help him shoulder a running load, and it is obvious that he has spent countless hours tossing up weights. Hell, when he gives you a hug or a handshake you can tell.  Furthermore, camp reports are that he is taking on more of a leadership role and is becoming a lot more vocal, particularly with the younger players. He knows that he is down to his last shot, and plans on making it count.

None of this is anything against Cierre Wood. Cierre is primed for an incredible season, and is undoubtedly the starter heading into the season. But knowing that Theo has always been a bit ahead of Cierre, and knowing how motivated Riddick is going into his final year (Cierre has one more after this if he wants it due to his redshirt year), I would not be surprised one bit if Theo took over that starting role. His versatility catching the ball will also be a factor that keeps him on the field in both short and long-yardage situations.

This year Notre Dame has a very legitimate shot at having two 1,000 yard running backs. I hope (and quite honestly, barring injury, expect it to) it happens, but if I had to make one bold prediction about who will lead our feared ground attack at the end, I’m taking Theo Riddick.

For further confirmation that Theo is going to have a huge year, check out this “Chronicles of Riddick” highlight reel.

Previous Post: « Brian Kelly and Year Three
Next Post: The Offensive Line: the Secret to Our Success »