It was pretty nice of the rest of the HLS team to leave me some serious question mark positions to handle this week. After looking at our best wide receiver yesterday, I will continue to treat you with a spot that will be under intense scrutiny from Irish fans all season: cornerback. 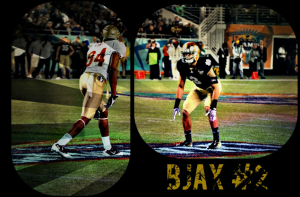 Cornerback may be the hardest position to play in college football. It is likely even harder when it isn’t even your natural position. However, after being switched from his wide receiver role two seasons ago, Bennett Jackson finally has a chance to shine and show that he can play anywhere on the gridiron.

There is no question that Bennett has the talent. He has good size for a corner, has elite athleticism and speed (he runs track in the spring, too), and a motor that is always running 110%. He is an excellent tackler (he was named Special Teams Player of the Year for the Irish in 2010) and a player that looks to leave it all on the field every play. When it comes to raw tools, Bennett is one of the most talented players on the Irish roster. He had 18 tackles in 2011.

But Bennett also comes with some huge question marks. He still has a relatively small amount of experience on the defensive side of the ball, and since he is widely considered to be the #1 guy for the Irish, he will be thrown right into the fire against some of the nation’s top receivers, and he won’t get a chance to really ease his way in.

Combine that with the fact that Jackson has been fairly injury prone so far in his career, and Notre Dame fans do have to worry a little bit. This year Bennett has had a nagging shoulder injury — it severely limited him in the spring game, and it is an issue that has not gone away yet — but he is far too valuable to this year’s team to sit on the sideline and heal, we simply do not have that luxury. He has also battled ankle and hip injuries in the past, and his reckless playing style definitely makes him a permanent injury risk. It is likely that he will have to play through a great deal of pain in 2012.

All in all, Bennett Jackson is going to be a vital part of this year’s team if the Irish are to experience success, and he is a very high risk-high reward type of player. However, if he can stay healthy and on the field, he has a chance to be a breakout star and make himself known to Notre Dame fans everywhere. 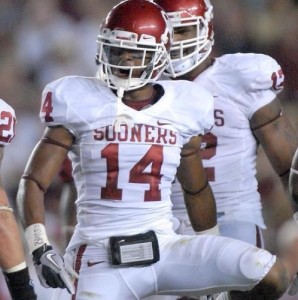 Aaron Colvin is an absolute tackling machine for the Sooners, as he racked up a team-leading 88 tackles last season to go with his 6 passes broken up. He combines with teammate Demontre Hurst to form probably the most formidable secondary the Irish will square off against this season.As seen from his 2011 numbers, teams are not afraid to throw his direction. But he is a very sound tackler and rarely lets a play get by him for a big gain.

Earlier this summer, ESPN had pegged Colvin as one of the most overlooked players in the Big 12.

Previous Post: « Breaking Down Tommy Rees’ Punishment
Next Post: ND in the Olympics: An Interview with Gerek »