The Notre Dame Women’s Basketball 2017/2018 season has had its fair share of peaks and valleys. Having three scholarship players on the bench with ACL injuries would be devastating to most teams in the NCAA. But, the women of Notre Dame basketball never let that keep them from focusing on being a team and achieving an amazing season.

On Monday evening, the Notre Dame Women’s Basketball team hosted a “watch party” at the Purcell Pavilion. The watch party was to celebrate the reveal of seeding and region selection for the women’s basketball team. At approximate 7:15 EST, they found out their destiny. The Notre Dame women will play in the Spokane Region and play sixteenth seed CSU Northridge. Yes, playing a sixteen seed means the women earned a number one seed in the Spokane Region. Coach McGraw commented about the seeding. “Playing the nation’s toughest schedule, and getting a number one seed, I am so proud of this group for what they accomplished.” Coach went on to say “It’s been an emotional ride for us, coming off a loss, it feels like it’s a new season, a new opportunity” 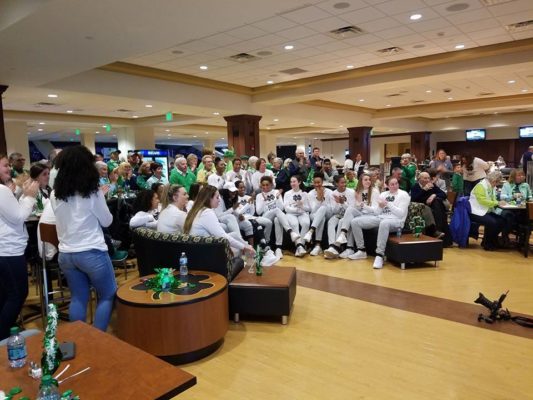 Waiting patiently to find out their destiny

The players were available to take questions and I was able to catch up with a couple of them. Jessica Shepard was first. Question to Jessica, “Looking back to the beginning of the season, you were not even sure if you were going to be able to play. Now you are about to play with this team in the NCAA tournament. What does it mean to be with this team this season?” Jessica’s response, “just the opportunity to play for a University like Notre Dame, is something I don’t take for granted. Especially a team like this, we fought through a lot of adversity. We focused on what we do have, we don’t focus on what we lost, it’s about what we do have. We look at the five starters we have, we look at the two players that come off the bench; it’s a tough lineup for any team.”

Next up is Marina Mabrey. I asked her, “with all the adversity this team has gone through this year, what’s the strongest part of this team?” “The competitive nature. The players we have are truly dedicated, and forget what we lost. We have a pretty special group of people. We are pretty talented and are trying to focus on the positives.”

Your Notre Dame Women’s basketball team opens up play on Friday evening at 5 PM at the Purcell Pavilion against CSU Northridge to kick-off the NCAA Tournament. Come on out and support your team as they will need all the energy they can get. Cheers and Go Irish!!!