When it comes to a Senior Day, no one does it better than Notre Dame Athletics. This past Sunday was no exception. Fifteen minutes prior to tip-off versus North Carolina St, the coaching staff and fans honored: (Seniors) Mychal Johnson, Brianna Turner, Kathryn Westbeld. They also honored Graduate Students Lili Thompson and Kristina Nelson.

On Senior Day, the underclassmen want to send the Seniors off with a win. In order to win, the Irish were going to have beat a 22-6 overall and 11-4 ACC Wolfpack team. And they did just that. The Irish defeated the NC State Wolfpack 86-67 and claimed their fifth consecutive ACC regular season championship. “That’s the first deep breath I have taken since November 1st,” coach Muffet McGraw said. “I am just so proud of this team and all they have overcome. We just kept losing people throughout the year and we never put our heads down and felt sorry for ourselves. They just came back to work every day, and they stepped up individually and as a team. I couldn’t be prouder of any team. That’s the most rewarding championship we have had.” 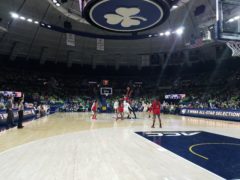 Arike Ogunbowale started the afternoon with a huge three-pointer to neutralize the previous three-pointer by NC State Kaila Ealey. The Irish were playing with an intensity that stopped the scoring ability of NC State as the Irish went on a 7-0 run. Then there was a shift in play, as NC State countered with their own 5-0 run, which triggered big emotions out of Jackie Young. Young was driving to the hoop, when the mask she had been wearing for the last couple months to protect her broken nose, broke from the force from her opponent’s forearm. Jackie took the mask and threw it under the hoop and resumed play. That moment, was a moment of transition for her. Marina Mabrey finished the quarter with a three-pointer that capped a 17-16 Irish first quarter.

The second quarter was quite like the end of the first quarter. The Irish defense applied a significant amount of pressure to the Wolfpack offense that forced them to turn the ball over four times in two-and-a-half minutes and a total of five in the second quarter. The Irish offense took advantage of the turnovers, and they went on an 8-0 run in that time frame. The two main contributors to the Irish second quarter scoring were Young and Ogunbowale. Ogunbowale had ten points, two defensive rebounds and one offensive rebound. Young had six points, one steal and one defensive rebound. Young and Ogunbowale were setting the pace to make sure the Seniors were leaving on high note.

The Wolfpack, however, were not going to just roll over and let the Irish have their way with them. The Wolfpack came out with a point to prove. Ealey opened up the quarter with a big three-pointer. The Wolfpack would apply some of their own pressure and they came within two points of the Irish at 6:08 remaining in the third quarter. The Wolfpack opened up with a 12-6 scoring drive in that time period. But, Ogunbowale was not going to let this team fall behind. Ogunbowale nailed a three-pointer that ended the scoring the surge of the Wolfpack. From that point the Irish never looked back.  Ogunbowale drilled a three-pointer just before the buzzer sounds to end the quarter. Ogunbowale finished the quarter with eight points, two steals, an offensive and a defensive rebound. Young contributed six points, and one offensive rebound.

With the end in sight, the Irish poured on an extra layer of pressure. Mabrey started the offensive pressure of a 7-0 run, of which she had five of them including a crowd rousing three-pointer. Young also continued to contribute through the fourth quarter. They contributed twelve of the twenty points scored by the Irish in the quarter. 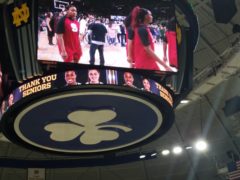 Jackie Young was the stand out of the day. Jackie led all Irish scorers with 22 points, just short of her career high. She also had four offensive rebounds and two defensive rebounds in 37 minutes of play. From the moment the mask broke early in the first quarter, Jackie was on a mission. Coach McGraw commented on a question about the Jackie’s mask breaking and it being cast aside. ” She was actually cleared to play without it and was going to wear it anyway. She played well and I think she likes playing without it.” Arike Ogunbowale was next with 21 points, 2 offensive rebounds and four defensive rebounds.