How do they do it? That’s the question I have about the ND Fighting Irish Women’s Basketball team. This is the number two team in the country, behind the UConn Huskies and ahead of the Louisville Cardinals. The team has a short bench with Brianna Turner and Mikayla Vaughn are out with injuries. You could easily add Jackie Young to the list as she wore a face mask to protect her broken nose in Sunday’s game against the DePaul Blue Demons. This team has the heart of a champion, but who is the emerging leader of this team? Lets jump into Sundays game to see if there are any clues to this question.

The ND Women’s Basketball team had their hands full on Sunday against the Blue Demons who definitely tormented the Fighting Irish. The Blue Demons came out very physical against the number two team in the country.

The Irish seemed kind of surprised by the physical defense of DePaul, but DePaul couldn’t covert on their opportunities and they had no solution for Jessica Shepard. Shepard was scoring at will and her teammates constantly fed her. Shepard was a perfect 6-6 from inside the paint. Shepard added an additional 14 points to the scoreboard in the second quarter for a total of 26 first half points and the Irish took a 41-40 lead into the locker room at halftime.

Knowing Coach McGraw and her passion for good defense, you could be rest assured that a discussion on better defensive play was had during the halftime locker room discussion, but DePaul made some defensive adjustments on their own. Shepard had only 5 field goal attempts and converted on four of them. In shutting down Shepard, Ogubowale got some looks from beyond the arc, hitting three shots from downtown.

However, the basket seemed to be shrinking for most the of Irish as the shots were not finding their way past the rim. The Blue Demons kept pace with the Irish who continued to struggle on defense. The Blue Demons were able to keep that pace until the fourth quarter which saw a strong Irish effort, socring 31 points, earning a 92-81 victory. 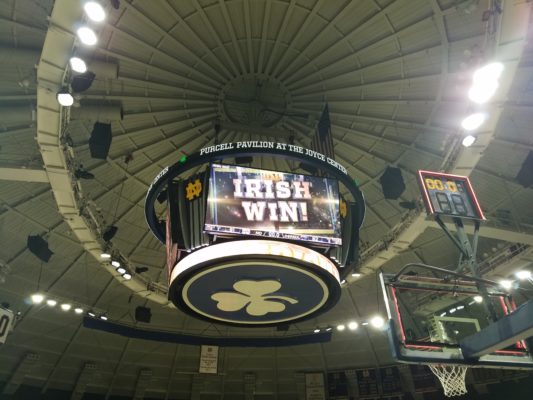 The key stat in this one was the amount of minutes logged by the Irish in the 40 minute contest: Shepard 33 minutes, Mabrey 36 minutes, Jackie Young (Broken Nose) 36 minutes, Ogunbowale 35 minutes, and Lili Thompson 32 minutes. With five players over 30 minutes, the short bench certainly seems like a major issue at this point.

In the post game interview, Coach McGraw stated that once the Irish got a lead, she saw her team relax on defense throughout the game. She also complimented DePaul on their total play.

I pointed out to Coach McGraw that the team team continues to grow with the short bench at the half way point of the season. I asked her what is her assessment of the team moving forward. She responded: “we are playing six people hard, and they are in good shape. Jackie just couldn’t see with the face mask, but a more custom fit mask is coming.”

Jessica Shepard was asked about her game and she flat out stated “the girls did a great job of getting me the ball.”

The next game for the ND Women’s Basketball is Wednesday afternoon at 3 PM as they will face Marquette. 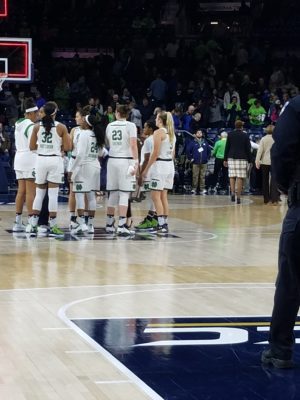 Congratulations Lady’s on the the win!!!  #GoIrish