Today, we’re previewing Notre Dame’s third opponent of the 2016 season: the Michigan State Spartans. The game will be played at 7:30 p.m. Sept. 17 and broadcast by NBC. The current forecast calls for rain earlier in the day, with a possibility of light rain at kickoff. 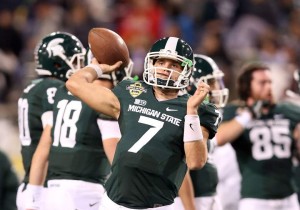 Connor Cook has graduated to the NFL and, after a brief competition, Tyler O’Connor emerged as the primary signal caller for the Spartans. The senior has actually seen the field in his three previous seasons, but never more than five appearances in any one season. He’s thrown 54 career passes and completed 63 percent of them; four ended up in his teammates’ hands in the end zone. He’s also thrown two interceptions.

O’Connor’s biggest start was last year against Ohio State in place of the injured Cook, a game in which Sparty derailed the Buckeyes’ hopes for a playoff. O’Connor simply managed the game – nothing more – in throwing for 89 yards in 12 attempts. If Michigan State is going to log its sixth 11-win or greater season in seven years, the Spartans won’t be able to simply rely on a stout defense. They’ll need their newly-crowned captain to strike fear into the hearts of opposing defensive coordinators. If O’Connor falters, look for redshirt junior Damion Terry to be handed the reins. Both guys will probably see action in the Spartans’ season opener against Furman.

L.J. Scott will receive the bulk of carries at running back, and will need to put the offense on his back if O’Connor and Terry can’t rise to the occasion. 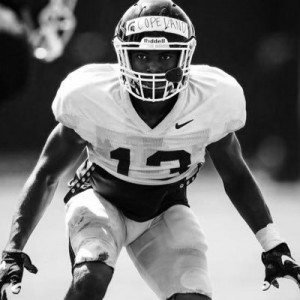 Remember the No Fly Zone? The Spartans’ lockdown secondary featuring Darqueze Dennard and Trae Waynes helped catapult the team to a near undefeated season in 2013. (Their only blemish being a 17-13 loss in South Bend that featured four costly pass interference penalties.)

Vayante Copeland is looking to restore that reputation, and Spartans fans are excited about Copeland’s potential to stifle opponent’s top targets. Copeland was outstanding in two games last year before suffering a season ending neck injury and coaches are already raving about his unique talents.

Dennard, who was a first round draft choice of the Cincinnati Bengals, has already predicted Copeland will be the Spartans’ next defensive back picked in the first round.

“He’s got all the talent,” Dennard told the Detroit Free Press. “Long arms. Can jump. Got ball skills. He got everything that a coach will look at in a cornerback.”

That’s a lot to put on a redshirt sophomore who, again, played just two games last year. But he’ll be surrounded by a lot of talent in cornerback Darian Hicks and safeties Demetrious Cox and Montae Nicholson. With Notre Dame returning a very inexperienced receiving corps, expect Spartans to try and shut down any Irish’s passing attack. 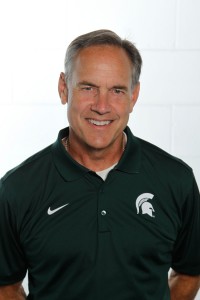 I admire Mark Dantonio for his ability to field outstanding teams every year. It cannot be easy when you play Urban Meyer and Jim Harbaugh-led teams annually and yet, Dantonio has won 65 games in East Lansing since 2010.

While Notre Dame coach Brian Kelly has managed to get the best of Dantonio in three of their four meetings, Dantonio has logged an extra 10 wins during the last years – and seven fewer losses. I’d imagine most Notre Dame fans would be much happier with two major bowl wins and a playoff appearance than having bragging rights over Michigan State. Did I mention a Dantonio-led team hasn’t lost two consecutive games since 2012?

There’s a lot of unknowns on this team. Will the quarterbacks produce? Can the offensive line keep the holes plugged without Jack Conklin? Can a pair of receivers match – or come close to – the production of the now departed Aaron Burbridge and Macgarrett Kings Jr.? Together, they averaged an eyebrow-raising 15 yards per catch.

SB Nation’s Bill Connelly has projected the Spartans to win 7.8 games this year, but even he admit the schedule is favorable. The Spartans are basically a coin-flip in home games against Michigan and Ohio State and an away game in Happy Valley.

Notre Dame is projected to beat them. But I’ve got to be honest. This game frightens me. Dantonio’s team will be rested after a tune-up against an FCS opponent and a weird week 2 bye and have two games worth of film on the Irish’s two quarterback attack. Unless O’Connor wilts from the pressure or the line is leaky and can’t repair itself, I could see this being a 10 win team in 2016.