Notre Dame football has played 127 seasons, but for the purposes of determining the five best openers I’m going to limit my selections to the modern era.

Here’s the criteria I used:

I was a junior in College, at tiny Beloit College (WI). After playing in our football intrasquad scrimmage early in the day, some teammates and I headed south to Chicago. This would be the second Notre Dame game in my life that I would attend in person. The Irish were ranked #3 and the long awaited start of the Ron Powlus era was set to begin in a game nationally televised by ABC. It could not have gone better. Powlus was 18-24 for 291 yards and 4 touchdowns as the Irish dismantled Northwestern, 42-15. The two Heismans appeared to be in the bag and every Saturday would look like this, although the rest of the story didn’t quite turn out this way. Nevertheless, on a day that provided so much optimism, it will always stick out to me. 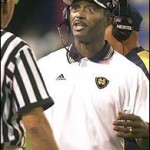 The start of the Tyrone Willingham era and other nationally televised game that I was in the stands for. Maryland would actually finish the season at 11-3 and destroy Tennessee in the Peach Bowl on their way to a Top 20 final ranking. On this day, the Irish used a smothering defense, five field goals from Nick Setta, a 76 yard punt return for a touchdown by Vontez Duff, and three interceptions from Shane Walton to handily dispatch the Terps. Notre Dame would ride this momentum to eight straight wins before their meltdown versus Boston College. Though the Irish would finish 10-3, it did little to convince the masses that Willingham was the guy. 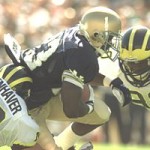 Michigan was coming off a national championship (Well…a share of one) and would finish the season 10-3. As I mentioned in a previous article, this was likely the signature win of the Bob Davie era. Notre Dame trailed 13-6 at the end of the first half, but would outscore Michigan 30-7 in the second half to win going away. In my mind this was Davie’s best team, but an injury to quarterback Jarious Jackson in Week 10 staggered the Irish to a 9-3 finish. It was the typical inconsistency that would plague the Davie era. 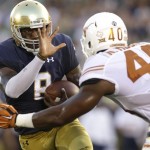 Some people…especially Notre Dame haters will chuckle at this one. Texas isn’t good anymore….blah, blah, blah. Texas is Texas! A hugely anticipated game as I felt the previous season Notre Dame had greatly underachieved given the talent they had. Brian Kelly helped feed the hype by suggesting the players go kick “Texas’s ass” on Showtime. This was a Saturday Night contest on NBC and the Irish did not disappoint. Malik Zaire lived up the hype as he hit on 19-22 for 313 yards and three touchdowns. The Irish defense also looked much improved and you couldn’t help but come away from this game thinking the Irish would make a serious run at the playoffs. 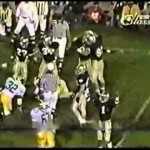 Notre Dame was coming off a 1987 season that featured three losses to close the season. The last two versus Miami and Texas A&M were largely blowouts. Though the Irish appeared to be trending upward, the experts still predicted they were a “year away” from contending for a national championship. In a game that typified “What though the Odds,” the Irish used four field goals from walk-on kicker Reggie Ho, excellent defense, and a punt return touchdown from Ricky Watters to knock off the Wolverines. The game, which kicked off the last national championship at Notre Dame, was not decided until Michigan kicker Mike Gillette missed a 48-yard field goal with 3 seconds remaining.