There’s an uncalled targeting incident from the Fiesta Bowl that still irks me when I think about it.

There’s about 40 seconds left in the second quarter. It’s 2nd-and-10 from Ohio State’s 15 yard line. Notre Dame’s DeShone Kizer is flushed from the pocket, makes a move on a defender and heads to the corner of the end zone. He extends the football to try and score and, as he does, Vonn Bell launches himself in Kizer’s direction and lowers his head…right into the quarterback’s helmet.

Today, the NCAA’s football rules committee will begin its three day conference to discuss, among other things, the controversial – but vitally important – targeting rule.

In 2013, the committee – in an attempt to enhance player safety – increased the penalty for targeting to 15 yards and an automatic ejection of the offending player. The rule leans on the side of player safety: “When in question, it is a foul.”

The Associated Press says: “The committee will consider giving replay officials more flexibility in how they review targeting penalties and allowing them to call fouls that are not called on the field.”

If this tougher penalty is to discourage headhunting and protect players, why is there a loophole that stymies replay officials? The on the field official was looking at Kizer’s hand in relation to the pylon; he missed Bell’s hit. Why couldn’t the replay booth act as a second set of eyes?

Targeting is two things. It’s hitting an opponent with the crown of your helmet. It’s also hitting a defenseless opponent on his head or neck with your helmet, forearm, fist, elbow or shoulder.

The application of this rule has been maddeningly inconsistent. Look at these two instances:

Top was called #targeting & overturned after review (QB was carted off, btw); bottom resulted in an ejection. @NCAA? pic.twitter.com/pWmVMP6YYY

In the Michigan-Michigan State game, Wolverines linebacker Joe Bolden (#35) is ejected for targeting. I’m not sure what you see, but I see Bolden being manhandled by Sparty’s offensive lineman Jack Conklin. Bolden falls on Spartans QB Connor Cook, who has slid and their helmets make contact.

Is this targeting? Yes, according to the rule. Does it feel like targeting? Of course not. 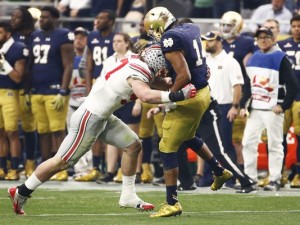 If the sole concern is player safety, then there should be zero objective standard. Anything that meets the statutory definition of targeting will result in an ejection (including the hit on Cincinnati’s Gunner Kiel in the top video).

However, this will forever alter the game. Defensive backs will be hesitant to hit a receiver after he’s made a catch but not yet “had time to protect himself.” Linemen and linebackers will try to figure out ways to tackle a quarterback who is deciding between running and making an awkward, last-second slide.

There will be plenty who say, “Let the players play and stop over-legislating the game.” It’ll surely slow down the game and cause important players – like Bolden and Ohio State’s Joey Bosa – to miss big games, which will diminish the excitement.

The committee needs to decide: Is the objective of the targeting enhancement to discourage dangerous hitting and make the game safer? Or is that just one priority among many others, which includes the bottom line?

Thanks to @SupermanTDJesus for the Vonn Bell video.