Home > Notre Dame Football > In Depth with our Loyal Son, The ND Squirrel 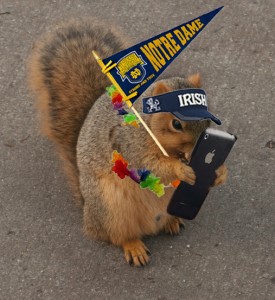 Welcome back to my series on beloved Notre Dame “parody” twitter accounts. This week I had a chance to sit down and talk with the ND Squirrel.

He’s a nervous guy, I mean squirrel. He loves Notre Dame sports, but the excitement and drama often gets to him so he has to burn off the nervous energy. He often sneaks into different venues … he’s always hiding somewhere in the stadium and will occasionally try to make his way to the visitors’ bench to cause trouble, but he’s never been successful. He’s been in Purcell Pavilion and in Compton.

His shining moment was calling for the TD pass to Tyler Eifert in the Stanford game. Just before the play, he tweeted “Paging Mr. Eifert … Mr. Eifert to the White Courtesy Telephone” and the next play was a TD to Eifert.

Here is my interview with the ND Squirrel and some further insight into what it’s like to reside on Notre Dame’s campus!

Q: I understand your family has a special connection to Notre Dame Football. Can you enlighten us?

A: “Yes, that’s right. The connection is through my Crazy Uncle Fuzzy. Back in 1999, Notre Dame was hosting Boston College. Late in the game, BC intercepted a Jarious Jackson pass to seal their win. Well, Fuzzy lost it and decided to try to take things into his own hands. With the teams at the south end of the field, Fuzzy scampered out onto the field from the tunnel heading toward the two teams on the field. By the time he got to midfield, I think he decided it just wasn’t worth it and turned back toward the north end zone. As he made his way, he realized the student body was cheering for HIM! So, he puts on a bit of a show – a few cutbacks, reversed his field a couple times then headed for pay-dirt. The closer he got to the end zone, the louder the previously silenced and disappointed student body became. The entire student section erupted into wild cheers as Fuzzy crossed the goal line, spiked an acorn, and bolted out through the tunnel before Cappy and his ushers could round him up. The only disappointment is that Fuzzy has not been awarded an honorary Monogram.”

Q: What is the best part of living on Notre Dame’s campus?

A: “Are you kidding me? This is Notre Dame! There can be no bad parts of living on this campus. Well, OK, maybe the long permacloud. Or in winter, when the ground freezes so hard that I can’t get to my buried acorn stash. Unfortunately, it always seems to freeze the hardest while the students are gone on break. Not many free snacks smuggled out of the dining halls to be had when no one’s around. Then again, there’s the visitors. Give a squirrel a stage and we’ll put on quite a show! Just ask Uncle Fuzzy.”

Q: As you watch the students go about their daily lives, what observations do you have?

A: “They’re the best. It’s fun to watch them grow up. As Freshmen, they don’t quite know what to make of the place or us squirrels. They even will act like they’re afraid of us. No, really! We’re not challenging you for the sidewalk, we just want to see if you have food for us! As Sophomores, they’re pretty consumed with their new majors and that’s when it gets dangerous for us. They forget we’re under foot and sometimes come awfully close to stepping on a tail. By the time they’re Juniors, though, they pretty much consider us family pets. They do seem to take things too seriously though. It’s hard to watch them during midterms and finals, or when they get bad news from home. That’s when we squirrels try extra hard to entertain them.”

Q: What is the nicest thing a student has ever done for you?

A: “Wow, that’s a hard one. They are so nice to us all of the time. They seem to know when it’s hard for us to find food and they always bring a little extra for us from the dining halls or the Huddle. They’re also good at holding a door open a little longer so we can sneak in to catch a game on TV. I do remember one time, during an awful freezing rain storm., one of the lads from Sorin came out with an umbrella and some peanuts. Must’ve fed me a dozen or so, all while holding an umbrella over my head. Pretty unusual for a Sorin guy … Oh, sorry.”

Q: Have you sat in on any ND classes? If you could get a degree, what would it be?

A: “I have not yet, although I will occasionally get some chemistry tips from Professor Emil T. Hofman, who always frequents a bench on my quad. He’s pretty good at teaching chemistry, but he keeps talking about the days of seven-points. For a while, I thought he was talking about the good times of ND Football, but he finally explained they were quizzes. But, I digress. If I could get a degree, I think it would be aerospace engineering. I understand I may have a famous relative from up north who could fly. Even got his own TV show. Really went to his head. What were we talking about? Oh, I remember. Since fly-overs have been banned, maybe I can help out by learning to fly and cruising the stadium airspace on game day. A well-placed acorn can do wonders on an opposing kicker’s field goal attempt.”

Q: What is the story with you and Father Sorin? You two seem to have a sometimes rocky relationship.

A: “You had to bring up that name, didn’t you. No, not Father Sorin … Rocky! Father Sorin, oh, he’s really a pretty neat guy. Early on, we’d spar a bit, mostly because he accused me of being fat. He tried to intimidate me by talking about needing more squirrel fur lining for his winter cassock or that I’d make a good stew. The truth is, I hear he actually did try to make a squirrel stew once. Asked the cooks to get the stove all fired up extra hot on a nice day late in the morning during April, 1879. I think we’ve seen the last of the squirrel stew attempts after that incident. I’m just kidding – that didn’t happen … I don’t think. Deep down he’s a pretty warm guy. And, I think he’s a shoe-in to fill in for any of the guys on Duck Dynasty.”

Q: How did you decide to use Twitter to communicate to the Notre Dame family? Are you surprised by your following on Twitter? Who are you most surprised to be followed by?

A: “There’s an old saying that goes “Even a blind squirrel finds a nut now and again” … I think it was a Zahm kid who had a bit too much to drink, said he put his iPhone on “airplane mode” and threw it. I ended up with the phone. Not being an SEC squirrel, Twitter wasn’t too hard to figure out and the phone’s touch screen works great with the tip of my nose. I never expected to have a big following. I mean, who’s going to believe a squirrel can use Twitter? I’ve got a long way to go to catch Miss Diggins, though (she might even be cuter than me!). Perhaps the most interesting follower wasn’t even a real person … yup, I was being followed by U’ilani Kekua. But, let’s not go there. NDSP (ND Cops) follow me … and steal my donuts! Heck, even Stephanie Gallo follows me (never sends me any wine, though). But, I’m most surprised to be followed by FirstDownMoses. I mean, who wouldn’t be surprised to be followed by a guy who, himself, was followed by an entire nation!”

Q: With all the players and people on the field at an ND game, aren’t you scared of getting trampled?

A: “That’s really not much of a problem. I stay pretty well protected during the games. It’s more of a risk to have one of the Irish Guard step on my tail as I sneak in with the band (oops, I shouldn’t have said that, I guess). The biggest threat during games are all the wires and cables. I get so nervous, I sometimes end up chewing on them. Accidentally bit into a power line during the BYU game. The next thing I knew, it was a couple hours later and I had singed whiskers.”

Q: What is your favorite kind of donut? And if students/faculty would like to leave you food donations, where should they leave them?

A: “I never met a donut I didn’t like, but my favorite are the cake donuts. They dunk well in my coffee and if they’re a bit stale, even better. I would strongly caution against leaving food donations for me .. especially donuts. As I mentioned earlier, the ND Cops (@NDSP) keep a close eye and they can’t be trusted around donuts. Leave a donut lying around and they’ll scarf it up pretty quick. It’s always best to hand-feed me. I won’t bite you and it’s a great opportunity to interact. If you’re shy, you can just put the food on the ground in front of me and I’ll take it from there (no pun intended).”

I’d like to give the ND Squirrel a big thank you for chatting with me this week! If you are not already a follower on Twitter, please, do so RIGHT NOW! (Please?) @NDsquirrel

Previous Post: « Why Comparing Devin Gardner to Jamoris Slaughter Is Comparing Apples to Oranges
Next Post: Gunner Kiel to Transfer from Notre Dame »