Here at HLS, I have broken down game film and done in-depth analysis of the Notre Dame offense under Brian Kelly; however, I have yet to show similar love to the defense.

Bob Diaco (and his flowing locks), has taken the schizophrenic Irish defense from the Weis era (seriously, three defensive coordinators in five years) and molded it into a true 3-4 anchored by a front seven that is a wrecking machine.

While it would be impossible to describe Diaco’s entire scheme or the intricacies of the 3-4 defense in a single post (if you’d like to do that, I suggest some serious reading), I decided to put together a primer instead. Think of it as your cheatsheet to the ND defense, allowing you to know the purpose of the “Cat”, why the “Dog” isn’t found in the nickel, and the benefits that a 3-4 defense brings to the table.

Below is a picture of the 3-4 defense at its most basic building blocks (aka its “base” formation) with the nomenclature that the Notre Dame staff uses. To better understand the role of each position, let’s take a brief look at each one. 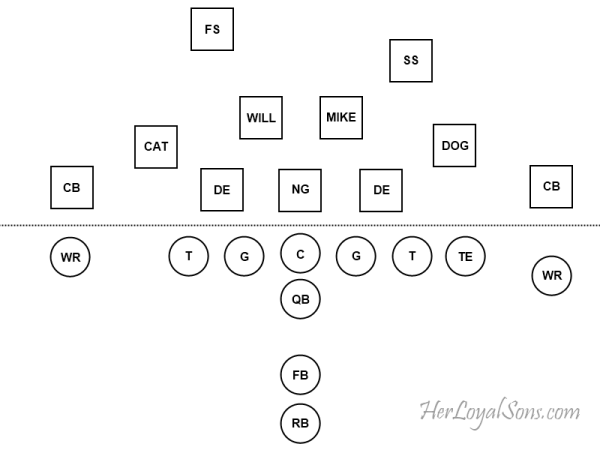 Also called the nose tackle (NT) or simply a defensive tackle (DT), the NG is the unsung hero and lifeblood of any good 3-4 defense. The ideal player for this position is a 300+ pound monster–no I’m not exaggerating. The NG is expected to draw a double team every snap to so the inside linebackers can make plays unblocked. They do this by clogging any interior holes that the opposing line tries to open. Good NGs are able to plug these holes at will, but the great NGs are a special breed all their own as they can also penetrate and wreak havoc behind the line.

In a traditional 4-3, the DE is the pass rusher, the sack machine. In the 3-4, they must be more than that. Much like the NG, more often than not, the DE will have to act almost like a DT/DE hybrid that can both draw a double team to free up the linebackers (the outside linebackers in this case) and also have the skill set to rush the passer.

The Cat (also known as the “Jack” on some teams), is the true pass rushing specialist of the 3-4. This is actually a role the Irish have yet to truly fill in previous iterations of their defense as the defensive ends have been the primary sack machines. For an example of an ideal Cat linebacker, think DeMarcus Ware of the Dallas Cowboys. Often times, you will see the Cat line up as if he were a defensive lineman as seen below: 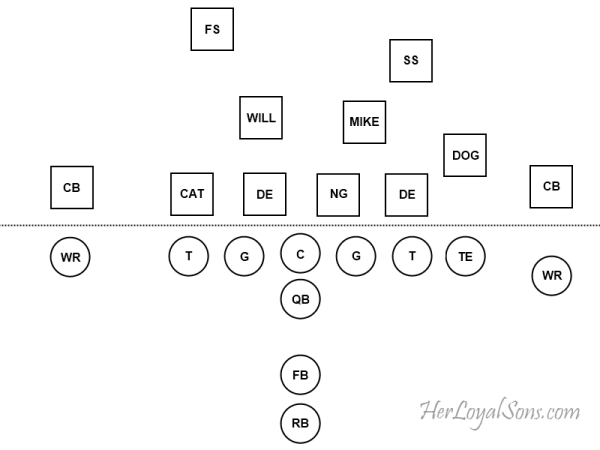 Much like other positions in the 3-4, the Cat linebacker must also have the ability to preform more than one function as they are expected to drop into coverage from time to time.

The Will, or weak side linebacker, gets its name from the side of the offensive line that they line up against. This “weak side” of the line is most often the side of the line (bisecting at the center position) that does not have the tight end. The job here is simple: make plays on your side.

The “Mike” (traditionally the middle linebacker in a 4-3 front) functions much like the Will. Their job is to make plays on the “strong side” (the side with the TE) of the line. Additionally, the Mike is often the quarterback of the defense, calling audibles and making pre-snap adjustments. The player filling this position is most often the best linebacker on the team and will often lead their squad in tackles.

The “Dog” (sometimes called the “Sam” or strong-side linebacker) is the coverage specialist of the linebacker corps. Most often matched against an opposing tight end, back, and, at times, a wide receiver, they are somewhat of a LB/CB hybrid in this style of defense.

Fairly simple here–these are the guys that try to break up passes and cause all of ND fandom to have heart attacks like we did last year against Michigan (nope, still not over it).

Part of the last line of defense, the SS plays a bit closer to the line than his counterpart and often lines up on the strong side. They can do a bit of everything: stop the run, cover receivers, and on rare occasions come in like a bat out of hell on a blitz.

The “center fielder” that is almost always dropped back in a zone, serving as the de facto last line of defense.

So now that we’ve covered the “who” of the defense it is time to examine what exactly they do. In order to properly understand how the 3-4 (or really any defense) works, knowledge of gaps and gap assignment is a must. 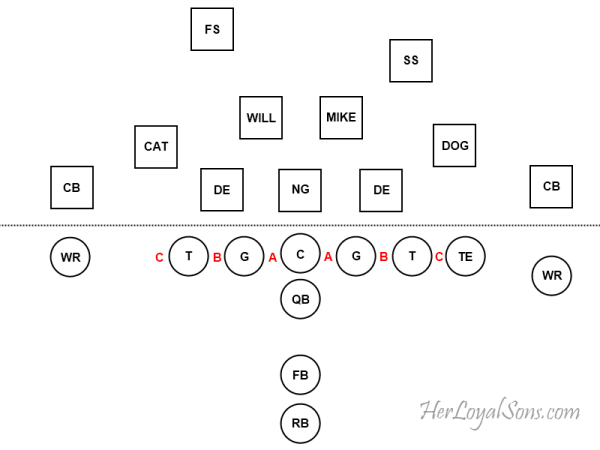 As diagrammed above, there are three gaps that are mirrored across the offensive line for a total of six. The “A” gap is the interior gap between the center and guards. The NG is primarily responsible for these gaps, often attacking the center directly and then moving to the gap in which the play is going towards. The “B” gap is the exterior gap of the line in between the tackles and guards, typically falling into DE territory. Finally, the “C” gaps define the area outside the tackle box. While this is usually an assignment handled by the outside linebackers (Cat and Dog), this is also a gap that a DE chooses to attack on a straight pass rush.

Ideally, on a run, the three defensive lineman will attract the attention of all five offensive linemen, which should also plug three gaps as well. This then frees up all 4 linebackers to make a play on the ball carrier with only the TE and possible a FB to worry about.

Let’s put this theory into action with the play diagrammed below: 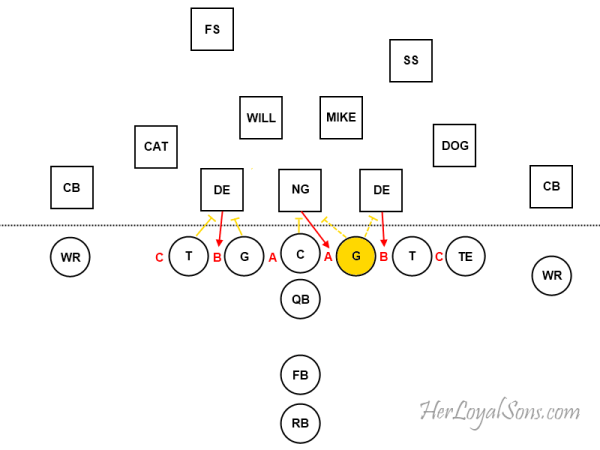 Moving from left to right, we see the weak-side DE attack the B gap in front of him. As we are going to assume everything is perfect here, this action draws a double team from the weak-side tackle and guard. The NG attacks the strong-side A gap and the strong-side DE attacks the B gap right next to it. This puts the highlighted guard in a very interesting spot as he now has to pick which defender to double team. 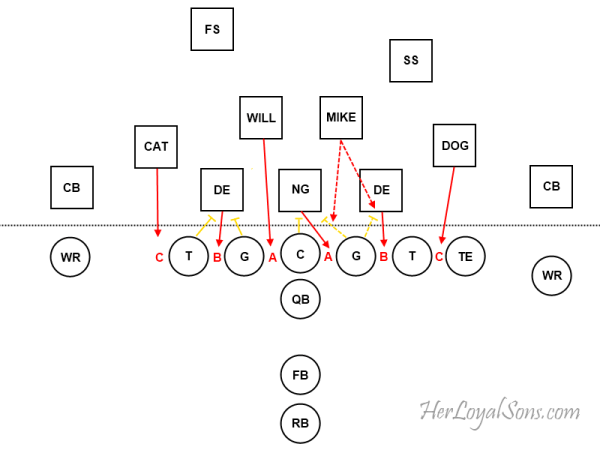 This leaves all the line backers unblocked by the offensive line. For the Dog and Cat, they will contain the C gap. The Will has a wide open shot at the weak-side A gap, allowing for easy penetration past the line, which would likely take the FB out of the equation early. The Mike is free to pick either the strong-side A or B gap, depending on how the offense handles the play. Of course should the play move away from either of these two options, he will be free to pursue it as well. The end result here is that all four linebackers have a legitimate shot at disrupting the play before it even crosses the line of scrimmage.

Again, this proposed sequence is an ideal situation, but it shows how proper gap assignments and containment can result in a scarily effective run defense; however, the true joy in my opinion, is how the 3-4 handles a pass rush.

Much like a 4-3, the 3-4 will usually rush four defenders on every play. An example of a basic pass rush with the Cat is shown below: 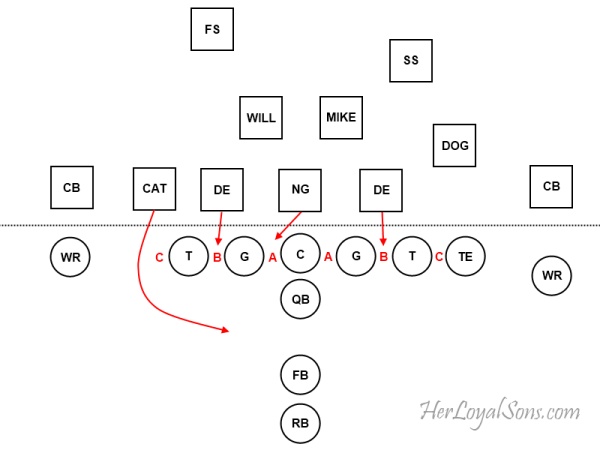 Unlike the 4-3, in which the defensive line almost exclusively rushes (save for some of the more exotic blitz packages), the setup of the 3-4 shines allows fourth rusher can really come from anywhere. While the Cat may be the pass rushing specialist, that doesn’t mean he will always do so.

To see what I mean, let’s look at another play: 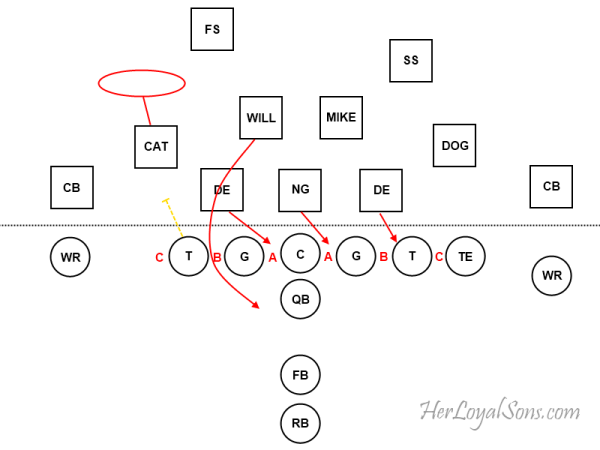 In this scenario, all three defensive linemen are crashing down towards the strong side of the line. This leaves the weak-side tackle with a seemingly one-on-one match up with the “expected” pass rusher, the Cat. However, in this play, the Cat drops back and the Will blitzes through the B gap. Should the tackle’s focus be on the Cat, he will likely be beaten by the much quicker linebacker. As an additional bonus, the Will is shooting through a gap that has a shorter distance to the QB as well, leaving very little reaction time for the backs to pick up the blitz.

This is just one example of the myriad of combinations that Diaco can throw at an offense as the fourth rusher can come from anywhere, including the safeties and corners. This ability to create confusion on just a basic four man rush makes any additional blitzers even more effective. An opposing line that struggles with just the four man rush in a 3-4 will find themselves eaten alive by blitzes.

The final wrinkle is, of course, only rushing three and dropping eight men back into coverage. While this has been seen in 4-3 defense as well, the difference here is that the eighth pass defender is a more mobile linebacker instead of a much slower DE (or God forbid, a lumbering DT).

So all of the above is great, but what happens when the offense tries to spread the Irish out and comes out with three or four wide? The answer: the nickel package. The nickel derives its name from the five defensive backs in the formation (get it, a nickel!), one of which replaces a linebacker. For a 3-4 team like the Irish, this means that the Dog is sent off as shown below: 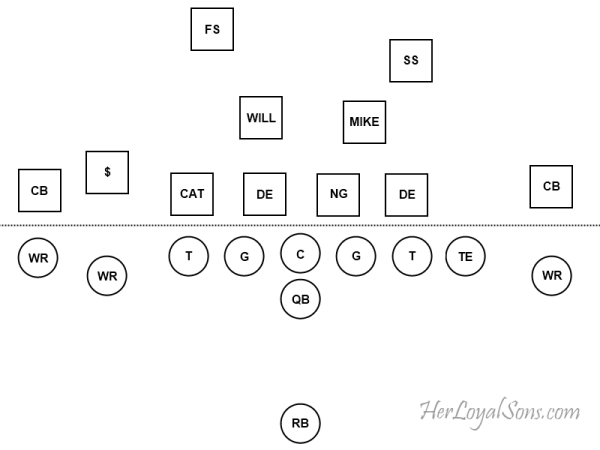 One of the first things that you will notice is that the Cat is once again lined up in as a defensive lineman, creating a four man pass rush. While the alignment is technically a 3-3-5, in practice, it is practically the same nickel package you’d see from a 4-3 team.

The “$” position replacing the Dog denotes the nickelback (no, not the crappy “rock” band). While traditionally the nickelback is the third CB on the depth chart, the Irish, and many other teams have employed yet another hybrid position in order to make up for a lack of depth. Last season, Jamoris Slaugther filled this role, which Diaco dubbed the “Star” linebacker. This position was a super-hybrid of sorts combining elements of safety, linebacker, and cornerback.

This season, expect the Irish to take a much different route. In his most recent presser, Kelly stated that he was very comfortable with all of his cornerbacks and plans to leave Slaughter at safety unless more catastrophic injures happen (please, God, no). While I do not share in Kelly’s optimism on the CB unit thus far (too many unproven guys), what this tells us is that Notre Dame will likely have a corner fill the nickelback role in 2012.

On the flipside, if you see Slaugther or another safety slide down into this position, start panicking because this means Kelly doesn’t trust CB #3 to cover a wide receiver.

So that sums up the basics on how the Irish run their 3-4 scheme against most offenses. How do they apply this to a triple option team like Navy though? Tune in next week to find out.

Previous Post: « Brought Lo by an Achilles
Next Post: Davidson College Ranks Ahead of The Irish: GSR or a Sick Rick Reilly Fantasy? »