As we wind down the “Know Thyself, Know Thy Enemy” series, we come to the most hotly debated position on the Irish: Quarterback. While I’ve been rather consistent in my stance of “anybody but Tommy”, I haven’t yet stated who I would start as the QB.

Kieth Arnold over at Inside the Irish got me thinking about this even earlier than I planned to when asked to rank the top 25 Irish players on the roster. As I did that exercise, I decided to rank everyone on where I think they are skill-wise right now and not estimate future potential. When I did that, I had all 3 QB ranked within a few spots of each other, but one managed to come out on top. 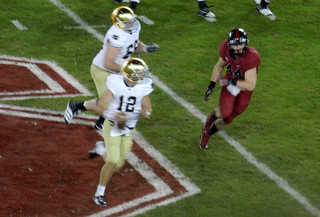 Andrew Hendrix rolls away from pressure against Stanford in 2011.

I can already hear a few screams of “REALLY NOT GOLSON?!” in my head as I type this out. However, I just can’t give Golson the nod over Hendrix based off just a single spring game and a lot of hype.

Don’t get me wrong, I believe Golson is immensely talented and will find himself on the field this season. He will be an impact player and he will simply wow us on more than one occasion. However, he has still yet to see a single meaningful snap in a game.

Andrew Hendrix though, has. Although he is not without faults, his mistakes are correctable. The INTs that he had last season (and in the spring game) were the result of flat out misreading coverages and losing track of a linebacker. That is much easier to fix than consistently locking in on a single receiver and forcing a ball into triple coverage or having passes that are wildly inaccurate on a regular basis as we’ve seen Tommy do.

With great speed and a rocket arm, Hendrix has all the physical tools he needs to succeed. With a year under his belt, he will be much better prepared to lead the Irish in 2012 than any other QB on the roster. He fits Kelly’s system and is a true dual threat that will force the defense to honor both aspects of his game.

Golson’s time will come. 2012 is the year of the Hendrix experience. 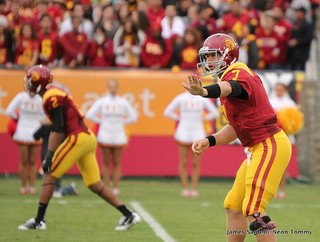 Unlike Notre Dame’s situation, finding the top opposing QB is a rather easy task. Just take a look at any pre-season Heisman list and you’ll find Matt Barkley’s name at the top and for good reason.

[Edit: As mentioned below, I completely forgot that Barkley was hurt in the 2010 loss to the Irish]

Once again, the Irish will end the season facing a top quarterback from the Pac-12 that is likely going to be the first pick in the NFL draft. And with weapons like Woods surrounding Barkley, it’s no surprise that many have Southern Cal as their favorites for the national title.

Previous Post: « And a Tip of the Cap to…Brandon Newman
Next Post: Kelly Suspends Rees and Calabrese »