Now that 2011 is over, Notre Dame’s season is over, and, really, as the Orange Bowl is about to kick off, any interesting games in all of college football are over, it’s time to take a look at the top half of our Top 10 Notre Dame Football Stories of 2011.

After Notre Dame managed to look like their all-new “Home Field Advantage” had intimidated the hell out of them when Soutern Cal came to town, just about everyone remotely associated with Notre Dame Football was pretty well good and sick of one another. The fans were at one another’s virtual throats on message boards near and far. We’ve heard there were at least 2 rather heated discussions among the coaching staff (and trust me, that’s no longer an issue). And of course, during Brian Kelly’s live radio show at a local South Bend establishment, leading up to the Navy game, Coach Kelly tried to answer a question about the the dynamic between the younger guys on the team and the more senior guys. And in spite of, or, perhaps because of, whatever effort Kelly did or did not make to tread lightly, he hurt some feelings.

And those poor little hurt feelings made sure to express themselves. Publicly. On Twitter.

Ultimately, if you really read what Kelly said (or hear it) within its context, it’s not nearly as bad as many would believe. But if you only read about it from particular beat writers who work in Chicago, you probably got the impression that Kelly would sooner watch some of the older guys on the team take up vaudeville than keep them around.

Nevertheless, some poor little hurt feelings had to express themselves. Publicly. On Twitter.

And so by the time the pep rally for the Navy game rolled around, fans and media alike were wondering if Kelly could hold this team together, and apparently Kelly had to have a team meeting at some point, during which at some point poor little hurt feelings were salved.

No matter Mike Floyd’s decision to come back to Notre Dame for one more year (a great one), he made an incredibly stupid decision to get behind the wheel of a car after consuming alcohol on March 20th. Suddenly a lot of optimism about the ND Football program’s chances in 2011 and Mike Floyd’s long-term outlook were thrown for a loop. It cost Floyd practice time, as he was indefinitely suspended from the program and lost all of spring ball. Which, naturally, cost the entire team. It placed Kelly in the unenviable position of having to walk a fine line between publicly dealing with the mess in an appropriate matter that would keep both alums and critics from looking for their pitch forks. It meant Floyd had to spend the off-season going through a legal process and a process put in place by Coach Kelly. It meant the loss of a captaincy for Floyd. And, really, who knows what all of this distraction may have cost the team as a whole in the 2011 campaign?

But Kelly kept angry folks from becoming enraged. And Floyd managed to satisfy both the legal system, the Notre Dame disciplinary system, and Kelly well enough to return to the team in time for the start of the football season. As a result, with a 154 yard, 2 TD performance in the opener against USF, Floyd collected the title for most receptions in a single career at Notre Dame. Later, he’d set records for career receiving yards, 100 yard games, and most receptions in a single season by a Notre Dame player. And by the time Notre Dame met Florida State in the Champs Sports Bowl, Floyd once again gained the title of captain.

3: Even Disney World Needs a Fresh Coat of Paint?

It was hinted at multiple times in the off-season by Kelly, Jack Swarbrick, and even some members of the equipment management team. But by the time the first night game at Notre Dame in decades rolled around (against USC), some body of people had created a plan to, if not revolutionize the “Note Dame Experience,” certainly pushed that experience through several evolutionary steps at warp speed.

I’m pretty sure Darwin had some ideas of what happened when things evolved too quickly.

Certainly not everything was a failure. While the object of quite a few “clever” quips about their shine, the new standard for Notre Dame’s helmets, created using something called a “Hydrographic printing process” rather than the old spray-paint, seem to be a resounding success among fans. And yes, they are mind-blowingly shiny.

But quite a few other steps seemed to (forgive me) hitch a ride on the Crazy Train and never get off. The piped-in music was met with disdain, by and large. The new player walk, while perfectly rational and sensible, set off quite a few alums who probably suffer from a mix of inability to be communicated to, and a lack of effort to properly communicate to them. The Addidas “designed” uniforms for the Maryland game set a new standard for “hype over form,” as no apparent actual effort was put into “designing” a uniform that at least featured components that were coordinated with one another.

These attempts at freshening up the staid but popular “Notre Dame Experience” caused quite a tizzy, as more than a few, uh, “traditional” alums and fans saw the as steps toward more major “modernization” of the experience, like the installation of a Jumbotron or (gasp!) Field Turf. And while we couldn’t be accused of being too traditional to see the arguments for either such upgrade to Notre Dame Stadium, we can certainly understand why a poorly coordinated effort towards modernization in 2011 did less to changes the hearts and minds of “traditionalists” and more to scare the high-waisted tartan pants off of them.

2: Crist Is Risen, Only To Be Sat Back Down

Although in retrospect, Rees’ ascension into the starting spot over Crist was foretold by a lot of prophetic news items in the off-season. Sure, many felt that Kelly was simply paying lip-service to some ethereal notion of a “quarterback competition” as the season opener approached, but warning bells should have been ringing in every fans head when Kelly was apparently unable to pick a starting QB far in advance on when he finally did.

While Crist clearly possessed superior athletic ability to Rees, and also had that much beloved, though often poorly measured “it” about his personality, there were the small issues of Crist’s tendency to injure knees or experience temporary blindness that probably counted against him. Worst still was his tendency to fail to manage the team before the snap – something Rees excels at, even if he does seem a bit confused after the snap. It’s something Kelly clearly values. And if you read up on the writings of offensive and/or quarterbacking “gurus” you’ll find it a common philosophy: The quarterback has no hope of executing the plays properly if they can’t get the game pieces set up before they go in motion. Crist may have only gotten a few opportunities to show he could manage that aspect of the game in 2011, but he also showed he could do so very few times. And while his athletic ability may be superior to Rees’, Kelly isn’t the kind of coach who wants to depend on athletic ability to get his team out of jams caused by poor execution.

Understandably, many were and are frustrated with the output at the quarterback position at Notre Dame in 2011. While Rees may still have been able to set up the pieces of a play nicely, he never shook his tendency to turn the ball over at the worst possible times and/or in the red-zone. Perhaps that has something to do with Charley Molnar’s departure to UMass. Perhaps not. I’m not one to speculate.

This will be hard for you to believe, but Notre Dame did not finish the season dead last in turnover margin. Somehow both SMU and East Carolina beat them to it. Still, Notre Dame commited an astounding 29 turnovers in 2011 while only managing to steal the ball away from the other guys 14 times. Consider for a moment that LSU only lost the ball 8 times to date, and Honeybadger and Co. stole the ball away 30 times. Major advantages in turnover margin wont make you a great team, but major disadvantages in this statistic will certainly hold you back. Rees was responsible for 14 interceptions alone (Crist with 1, Hendrix with 2).

An incredible 15 turnovers were committed by Notre Dame in September alone. And in their 5 losses, the Irish gave the other guy the ball 19 times and averaged a turnover margin of -2.6. A 2.6 Turnover deficit! Even though the Irish managed to steal the ball away a little more than 1 time per loss! Just astounding. Had the passing game, alone, managed to just cut the interceptions in losses by half (11 were committed), in all likelihood the Irish would be spending the first week of 2012 in a BCS bowl. But instead, Irish fans sit and watch the teams like Virginia Tech and Michigan in slap-fights upon BCS logos. In probably the first time in 10 seasons, had the Irish reached the BCS, they’d have likely not run into what is arguably the best team at that time. In other words, it’s the most winnable set of non-Championship Game BCS contests in a long time, and Notre Dame missed it because of turnovers.

Clearly irked, Kelly made mention of the tendency of Notre Dame to cough up the ball, particularly by the quarterbacks, after just such sins cost the Irish the Champs Sports Bowl against Florida State. And interestingly – and I think tellingly – he placed responsibility for that bad habit on the coaches, mentioning that their’s nothing wrong with how the players compete, but the coaches need to get better in order to see an elimination of the habit. Given the recent moves in shaking up the coaching staff, we expect the top story of 2011 to be the top theme in the spring of 2012. 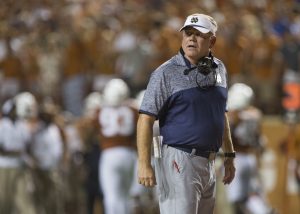