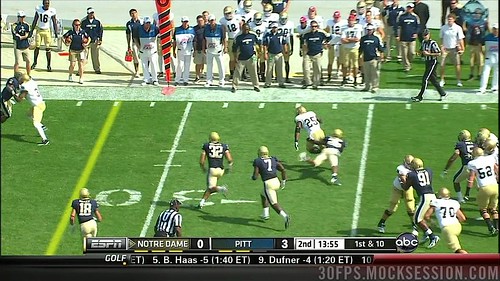 Never would guess that this was going to be a 79 yard TD run.(Via @bubbaprog )

Here is a quick look back at some of the highlights of Saturday afternoon’s victory over Pitt.

Tommy Rees successfully made the 1/2 yard on 4th down. With Pitt out of timeouts, the 1st down conversion allowed ND to just knee away the rest of the clock.

Turning Point
Down 12-7, Tommy Rees goes 8-8 and leads Notre Dame down the field connected with Tyler Eifert for a 6 yard TD pass to put Notre Dame ahead for good. A successful 2 pt conversion allowed ND to go up a FG. Thankfully, ND never looked back and 15-12 ended up being the final score.

Next Week:
Notre Dame is at Purdue at 8 pm. ESPN has the game and they release their coverage maps during the week so you’ll know what channel the game will be on in your area then.