Growing up in Texas, you pick a side. Declare your allegiance early. More often than not this boiled down to throwing up a hook ’em or a saw ’em off with your hand. I found myself in the later group, more specifically, to the subset that would also happily shout out a “whoop” or “gig ’em”. I ended up happily trading these in for “Go Irish”, drunken jigs on the bleachers, and push-ups in the student section. Still, part of my heart–that’s Texan for college football fandom–remained a part of the 12th man down in College Station.

Some of my best friends are Aggies. Two of them stood at my wedding. One was my best man. Since I never “properly” dunked my Notre Dame class ring at the Dixie Chicken, one of their favorite games was and still is trying to find a way to steal it and drop it into the bottom of a beverage. 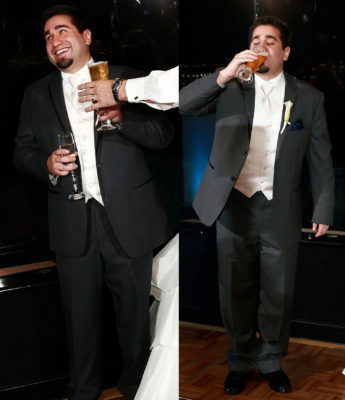 During my wedding reception, they even got our photographer to play along, taking my wedding and class rings for pictures for a very extended period of time. It wasn’t until the end my of best man’s speech that I received it back in the bottom of a pint of Miller Lite. With the Aggie War Hymn playing in the background, I chugged the beer in the midst of multiple whoops from all Aggies in attendance to retrieve them, giving whoop of my own at the end. It’s one of my favorite stories from my wedding day.

August 31, 2024 was the first of only two dates that I ever planned to cheer against those boys that show the real old fight, much less in their own house.

As we enter 2018, I’m considering an earlier start and getting a few years of practice in hoping for the failure of the Jimbo Fisher era.

It isn’t simply because the Aggies sniped Mike Elko from Notre Dame either. The Jimbo hire already had me rather nervous about the direction of their program. Guaranteeing $75 million over a decade is flat-out insane. Oh sure, he won a national title, but did so at a traditional powerhouse largely in part to turning a blind eye toward Jameis Winston.

I was at that title game and witnessed the end of what was an insane miracle of an Auburn season that included the kick six. I had no words for my sister who just watched her school come seconds away from winning the title. Then Jimbo gave me a gut-wrenching last-second moment of failure of my own as the Irish saw a game winning touchdown erased by a horrendous offensive pass interference.

That’s a lot of words to say I really, really don’t like Jimbo and why I wasn’t jumping for joy when Texas A&M made their $75 million gamble. With the signing of Elko, currently reported at three years, starting at $1.8 million, but likely to average closer to $2 million, puts the Aggies at $80+ million in the next decade for just two people, one of whom will get paid regardless if he wins a single game.

A school whose fight song centers around knocking Texas off their high horse has become the embodiment of every message board poster that wonders why their school doesn’t just “back up the Brink’s truck”, hire their dream candidates, and just watch the wins roll in. Easy right? If you’re nodding in agreement, just remember that a school just to the north of Notre Dame will enter year four of this very same experiment. Michigan has only a single win against an opponent over .500 this season to show for it (thanks to Purdue winning their bowl game), eight passing touchdowns, and is currently hanging their hopes on a Mississippi QB transfer because the sleepover recruiting specialist of a head coach apparently can’t recruit or develop one on his own.

Anyways, once I saw the reported details of the Elko contract, I had myself a little Twitter outburst:

Further real talk: you might want to brace yourself as a fan if you think ND goes all-in on crazy football money.

This was based on what we’d seen, or perhaps more accurately perceived, as Irish fans in the past. Notre Dame appeared continuously stuck in a never-ending game of catch-up to the assistant coach market value far too often. While no Irish fan using logic would want money thrown in a stupid fashion just to absolutely ensure a coach will stay (see: Weis, Charlie), it always appears as if Notre Dame tried to play a game no one else was and not fully commit that they would be a major financial player.

Little did I know at the time, the Irish played ball with Elko:

Also per source, there was no philosophical/personality rift between Elko and Brian Kelly. So we can probably put that to rest.

As the South Bend Tribune article pointed out, the $1.5 million number would have put Elko behind only Clemson DC, Brent Venables, and LSU DC, Dave Aranda, who said no to the Aggies by singing a record-breaking four year, $10 million contract. Not only that, the verbal agreement came after Texas A&M already tried to court Elko, prompting what would have been a Notre Dame record raise for an assistant coach. Putting Elko in that kind of rarefied monetary air is absolutely a sign that Notre Dame is willing to participate in this crazy arms race and rather aggressively.

Or to put it another way, the Aggies found themselves out-bid not once, but twice. After the Aranda spurn, they went back to the Elko well with a couple more money bags. While I’ve seen a handful of “it’s only $300k” comments in the wake of this, that’s not an insignificant amount (a near 20% increase), plus that amount will make Elko the second-highest paid defensive coordinator in the nation, behind Aranda.

No disrespect to Elko, but both Aranda and Venables are far more battle-tested and proven commodities. Notre Dame putting that same kind of faith into Elko and pushing him closer towards Aranda’s record-breaking number and past Venables’ contract is a rather large ask after just one season in South Bend.

And I don’t begrudge Elko one bit either. I love my current company and the people I work with and for. If someone comes with anything sniffing a 20% compensation increase, I’m gone. If I got that 20% increase after my current employer already significantly bumped my pay, I wouldn’t expect a match at that point. Even if I did, I would 100% assume I’m the first on the chopping block if shit goes south. At the end of the day, this is his career and its a business decision.

Does it suck for the kids that early signed just a couple weeks ago? Absolutely, but that’s been the game for years. Unless the NCAA regulates some kind of periods in which coaches can or can’t jump ship, that will forever be the case.

Oh, and as far as those dear old Texas Aggies go…