Sadly this streak – along with Mike Brey’s career best 9-0 start to the season – came to an end against Villanova in a frustrating 74-66 loss. An additional streak was also snapped as Bonnie Colson also failed to continue his streak of double-doubles, which ends at 6 games, as the power forward finished the game with 11 points and eight rebounds.

Notre Dame had Nova on the ropes and led by as many as 11 points in the first half with a chance to extend the lead, but couldn’t keep the Wildcats off the offensive boards.

Villanova out rebounded Notre Dame 33-25 for the game, many of which lead to second chance opportunities and helped Villanova claw their way back to a five point deficit by halftime.

Martinas Geben showed continued improvement from last year and contributed heavily in many aspects that won’t be found in the scorebook. Geben was crucial in the pick and roll game while giving the Irish a much needed inside defensive presence. He finished with five points and three rebounds.

Ultimately, down the stretch the Irish couldn’t manage to slow down Villanova’s Josh Hart, who lead all scorers with 37 – half of his teams total points and a career high. Nineteen of those points came in the first half, with Hart added 18 in the second. Villanova also converted at the charity stripe making 20 of 22 free throws compared to a measly six for six for the Irish. 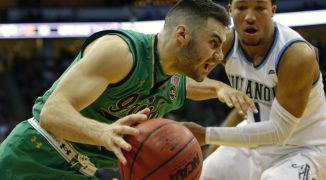 Notre Dame started fast out of the gates, much in part to Point Pleasant Beach, N.J. native Matt Farrell. The junior point guard had quite a Jersey homecoming in the Prudential Center, aiding the Irish to an early 8-2 lead. The 6-foot-1 point guard opened the game with eight of the Irish’s first 13 points.

Additionally, Farrell made or assisted on Notre Dame’s first seven of eight field goals. Farrell, along with senior Steve Vasturia, lead the Irish with 18 points, adding six assists and one steal.

Early into the second half Farrell got into foul trouble, picking up his third of the game, thus relegating him to the bench. In these minutes his calming presence was sorely missed.

Notre Dame's Matt Farrell may be the most improved player in the country. Legit. 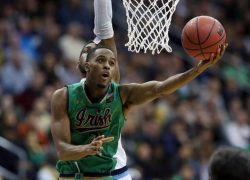 Notre Dame’s V.J. Beachem (3) takes a shot during the first half of an NCAA college basketball game against Villanova Dec. 10, 2016, in Newark, N.J. (AP Photo/Mel Evans)

V.J. Beachem was never able to get going at any point throughout the game, failing to connect on any of his five long range attempts. As a team, the Irish were only 6 for 22 behind the arc – far worse than the their 43 percent average for the year.

Beachem finished the game with only four points, despite averaging almost 17 per game entering Saturday’s contest. The senior didn’t help the cause, forcing up a difficult one legged fade-away that came up short late in the game during a crucial possession. Any one of the missed threes could have provided a momentum shift in the second half, but Villanova was fortunate that Beachem simply didn’t have it going Saturday.

Looking ahead, the Fort Wayne forward will need to bounce back quickly as the Irish will take on 18th ranked Purdue one week from today’s game.

It’s always frustrating to lose close games, especially to the No. 1 ranked team in the country, and excessively especially when it looks like Notre Dame beat themselves.

Rest assured Coach Brey and the Irish will learn from the tough loss and lean on the experience gathered in future games against top teams in the country.