Mike Brey has the Notre Dame men’s basketball team off to the hottest start in the coach’s 17-year career in South Bend. The Irish beat in-state competitor Indiana University – Purdue University Fort Wayne, who recently posted a win against another in-state basketball school. The 87-72 win moved the Irish to 9-0. In order to remain undefeated, Brey and Co. must travel to Newark, N.J. to face Villanova Saturday. The Wildcats are the defending national champs, ranked #1 in the AP poll and are also unbeaten.

Here are a few things to consider in light of Saturday’s big match up:

Mike Brey and the Irish are currently 7-4 when facing the defending national champions. Not to mention they have rattled off four straight against defending champs. This is a fairly remarkable statistic, but don’t take my word for it. It’s unquestionable that Notre Dame is capable of beating anyone on any given night, especially considering the offensive weapons they have at their disposal (four players averaging double figures).

Well, @PeteSampson_ was right. It was an unbelievable stat. After further review, @NDMikeBrey is 7-4 against defending champs with @NDmbb

As previously mentioned, both ND and ‘Nova enter Saturday’s contest at 9-0. However, the Wildcats are only able to claim one quality out of conference victory, which was a three-point win against 18th ranked Purdue. One would presume the defending national champs would open the season without a loss considering their schedule has consisted of IUP (Indiana University of Pennsylvania – seriously that’s a real school), Lafayette, Western Michigan (ROW THE BOAT – sorry, force of habit), Wake Forest, University of Central Florida, College of Charleston, Penn, Saint Joseph’s and LaSalle.

On the flip side, Villanova will be the first ranked opponent the Irish have faced all year. This isn’t to say they haven’t been battle tested, having posted two quality wins in November against Big Ten foes Northwestern and Iowa. Neither Northwestern or Iowa are of the caliber that Villanova is, but it’s reassuring to see Notre Dame fare well against other quality programs. 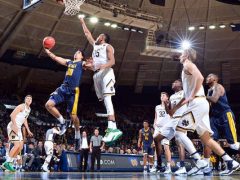 Much of the success the Irish have had in the last few years (back to back Elite Eight appearances) can be attributed largely in their ability to share the ball effectively. Through nine games, Notre Dame leads the country posting a 2.34 assist/turnover ratio – far and above the second best ratio of 1.88 achieved by UCLA. Comparatively, Villanova also takes care of the ball ranking 21st in the nation with a 1.45 assist/turnover ratio. This statistic is often an indicator of a well coached and selfless team. Look no further than Notre Dame’s rout of North Carolina A&T last Sunday as the definition of an unselfish basketball team, where the Irish “doubled up” the Aggies on the scoreboard with a score of 107-53 while posting seven different players in double figures – a new Notre Dame basketball record. If the Irish are going to pull the upset on Saturday, it will likely take a similar amount of contributors in the score book.

It would be criminal not to mention the incredible impact Bonzie Colson is having early this season. He’s become known now as one of the most efficient power forwards in the country, despite being listed at 6-foot-5. To put that into perspective, three guards on the team are listed as taller than Colson (freshman Djogo Nikola 6’7, sophomore Rex Pflueger 6’6 and senior Steve Vasturia 6’6). Nevertheless, this hasn’t stopped Bonzie and his nearly 7-foot wingspan from averaging a double-double. Bonzie has busted onto the national scene, averaging 17.1 points per game, 11.1 rebounds per game, a 50 percent field goal percentage, and a phenomenal 91.7 percent from the free throw line. His game doesn’t start and end in the paint either. This year he has added the three-point shot to his arsenal offensive firepower – shooting 42.1 percent from behind the arc. He’s also been the subject of a feature piece in a recent Sports Illustrated article. Bonzie will need to continue his streak of double-doubles if Notre Dame hopes to continue its streak of victories.

Don’t plan on going out for a Saturday lunch, unless it’s to a sports bar – which I fully endorse. Tune in at noon to watch the Irish attempt to claim the title of “world beaters” for the 5th time in a row.