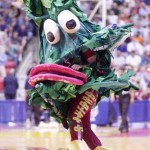 You may want to see a good football team with rigorous academic standards this weekend. If so, then tune in Friday night to watch Stanford. This is shaping up to be a play-in game for the Pac-12 championship and, as you can see below, Stanford has been doing it against the sixth-toughest schedule in the country. Christian McCaffrey isn’t getting the hype of Louisville’s Lamar Jackson, and he disappeared for a good stretch against UCLA last week. But as the calendar turns to October, an undefeated Cardinal will keep McCaffrey in the national spotlight. You can cheer for Stanford here, but know that you’ll be seeing this team take on Notre Dame in a couple weeks. Hopefully, the Irish defense on October 15 bears little resemblance to the defense we’ve seen thus far.