If you were the general manager of Notre Dame, would you trade Malik Zaire for Florida Gators’ linebacker Jarrad Davis and wide receivers Joshua Hammond and Dre Massey?

David Kenyon, a Bleacher Report columnist, suggested this in “Ten College Football Trades We Wish Could Happen This Spring.” Kenyon acknowledges there’s no such thing as trading college football players (although Kyler Murray & Trevor Knight did a switcheroo that looked like one.)

Kenyon’s caveat was that his trades were “subjective” but “made as fairly as possible.”

I can’t argue with the subjective part, but this is a terrible hypothetical deal for Notre Dame. 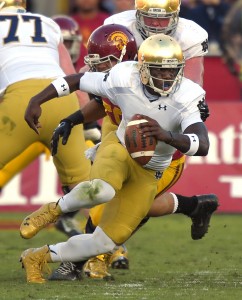 Malik Zaire is a talented quarterback who is returning from a season-ending ankle injury. Under Zaire’s brief leadership, the Irish offense was more productive than it was under DeShone Kizer (when comparing equal playing time). Zaire hasn’t fumbled the ball or thrown an interception. He’s also a charismatic fellow who may well become a team leader. A recent poll of Blue & Gold Illustrated readers picked Zaire as the second most-likely captain this coming year.

I don’t know who Coach Brian Kelly will tap to start the season at quarterback. Even if it’s Kizer, it’ll be nice to have Zaire if Kizer struggles or is injured. Even if Kelly decided not to redshirt sophomore Brandon Wimbush, his options for backup would be Wimbush (who has attempted five passes in his college career) and true freshman Ian Book, a three-star prospect.

Smith’s backup was Te’Von Coney, who saw limited action before replacing the injured Smith in the Fiesta Bowl. Coney then injured his shoulder in the same game and was replaced by the now-departed Jarrett Grace. Coney will likely battle redshirt freshmen Josh Barajas and/or Asmar Bilal for the WILL position, with Coney the favorite if he’s healthy. 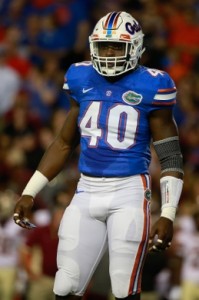 Davis would undoubtedly start if he was Irish. But his absence would hurt the Gators tremendously. Davis’ backup at Florida is senior Daniel McMillian.

Beyond those two [Davis and senior Alex Anzalone], the depth really drops off quickly. Both McMillian and Rolin have some experience now as fourth-year players, but neither has been productive at all on the field. Injuries have kept Rolin from getting up to speed, while McMillian frequently finds himself in the wrong position to make a play.

For the Gators to be good at linebacker in 2016, Anzalone must stay healthy and some of the younger players like Jackson, Reese and the other freshmen coming in this summer need to be able to play some snaps.

Joshua Hammond is a freshman wide receiver who plays the X (split end) position, where the Irish also lost a player to the NFL Draft – Will Fuller. But the Irish have the gifted Equanimeous St. Brown, senior Corey Holmes and freshman Kevin Stepherson at that position. Javon McKinley, who could also play there, was rated higher than Hammond in 247Sports’ composite rankings. Chase Claypool, another Irish signee, was rated one slot lower than Hammond.

Dre Massey plays a mixture of slot, running back and kick returner. He was Scout’s 22nd best junior college player in 2015; Notre Dame, to my knowledge, has never recruited a junior college player. Massey is expected to challenge for a starting role in the Y (slot) position at Florida; the Irish have Torii Hunter Jr. and the speedy C.J. Sanders there already. 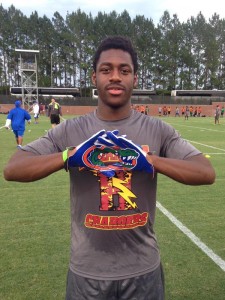 Thankfully, David Kenyon is not the general manager of the Notre Dame football team and there are no trades. Because this would be a lopsided one in favor of the Gators.

Zaire’s departure would leave the Irish in a tenuous position if Kizer struggled or was injured. With Kizer running the ball nearly 120 times last year, his chance of being banged up is pretty good. Add in the fact that only one QB has played a full season under Kelly (Tommy Rees in 2011), and you could see why the Irish would be reticent to deal Zaire.

What they give up – stability at the most important offensive position – would not be worth what they got back – a stud linebacker and two wide receivers with great potential (but not much else). The move would hurt the Gators at linebacker, although their wide receiver corps would function fine without Hammond or Massey. The Irish have plenty of depth at wide receiver. What they need is an explosive edge rusher or a shut down corner.