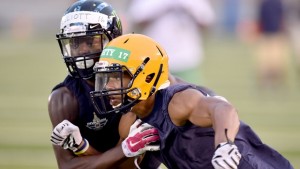 Jalen Elliott is a talented wide receiver whose skills were hidden because he played quarterback for L.C. Bird High School in Chestfield, Va.

The Irish want the 6-foot-1-inch teenager for their secondary.

Transitions in and out of breaks/turns smoothly. Seems comfortable in a backpedal for a player who spent the majority of his time at quarterback during his junior campaign. Shows quality ball skills and high-pointing ability on the back end of defense. Uses hands to his advantage versus receivers. Has very natural athleticism with the ability to get off the ground to make a play. Shows a degree of physicality.

Elliot’s weaknesses, Prister, said are his follow speed after initial contact with the receiver and his tackling – which sometimes looks more like “pulling” than wrapping up.

Elliott figures to see time at either free safety or cornerback during his time in South Bend. Senior Max Redfield is entering his final year of eligibility, and junior Drue Tranquill has two more years left. There’s a pair of freshman, too – Nicco Fertitta played a bit on special teams, while Mykelti Williams was a redshirt. Depending on the scholarship crunch, there may be room for sixth year Avery Sebastian, and fifth year Nicky Baratti and John Turner. Sebastian, a Cal graduate, broke a bone in his foot in the first game as a transfer student. Baratti and Turner have played sparingly.

With secondary being an obvious area of need in improvement, the Irish went all in this recruiting cycle, grabbing Elliott, Donte Vaughn, D.J. Morgan, Devin Studstill and Spencer Perry for the safety position, and adding Troy Pride Jr. and Julian Love at cornerback.

Elliott turned down offers from Michigan State, Auburn, Virginia, Georgia, Virginia Tech and The U to play for the Irish.

Elliott’s parents are both in education, and he understands that football isn’t his only avenue for success at Notre Dame. The teenager told Irish Illustrated that Coach Brian Kelly stressed the importance of getting good grades.

He said we have to go in looking at it like the students there are five-star academic students there and we’re more like one-stars. We just have to have the same drive and determination like we do on the football field in the classroom as well, just pushing to make that transition from high school to college.

Elliott committed during the university’s Irish Invasion camp last summer and was the seventh overall commit for the Class of 2016.