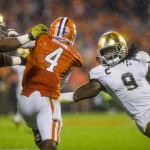 The Other Tigers finished 2015 unblemished, but North Carolina has the opportunity to play the heel on Saturday, to borrow a wrestling term. Deshaun Watson will try to (sher)lock up a top playoff seed. I’m convinced an undefeated Iowa is the most that the Chaos Theory Gods will throw our way this year, but perhaps Larry Fedora’s squad will throw their hat in the playoff ring with a championship game upset.

Previous Post: « When You Don’t Have Your Fellow Domers
Next Post: Friday Roundup: The “Coaching Centrifuge” Episode »