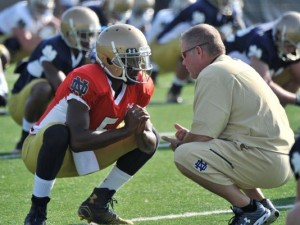 It seems like only yesterday that Everett Golson held the most popular position on the Notre Dame football team: backup quarterback. 2011 marked a season in which fans clamored for the rise of Golson. A struggling and turnover-prone Tommy Rees did what he could after taking over for Dayne Crist; however, the good will created by his 4-0 run to end the 2010 season, including the first victory over Southern Cal in ages, gave way to the desire to see the freshman standing on the sideline full of potential.

2012 delivered vindication for that desire. Golson found himself trust into the starting QB position after Rees had an ill-fated encounter/failed escape from a police officer at an off-campus party. And while the Irish’s 12-0 run that season included many a save from Rees, including one start, Golson provided more than just flashes of brilliance in his first season. His performance on the road at Oklahoma and a miraculous save in triple overtime against Pittsburgh, a game that featured a benching of Golson and Rees, had us believing the future had arrived at Notre Dame. Brian Kelly had his guy, his quarterback.

And then in the 2013 offseason took him away from us.

You could argue that Golson found himself in the position of backup quarterback for a second time that season. Once again, Irish fans screamed “TOMMY, NO!” more times than they wished. All hope for the success teased in 2012 went to California, as did the young man from South Carolina that delivered them. Perhaps the expulsion would serve as a blessing in disguise, we thought. A semester away from Notre Dame with a quaterback “guru” might just provide Golson to make as many strides, if not more, than he could going through the rigors of a fall season on the field and in the classroom.

We watched training videos as if they were a second round of recruiting film. Golson did drills blindfolded. George Witfield swung brooms at him. It looked like Jedi training from Star Wars modified to fit the game of football. Impossible to see the future was; however, Golson started throwing the football with the laces. Surely, that signified his football growth.

In 2014, the return of Golson appeared to put the Irish back on track. After a 6-0 start, Notre Dame traveled to Tallahassee. This quarterback Jedi looked poised to unseat Jameis Winston and the defending champion, and seemingly the evil empire of college football.

In this battle, Notre Dame fans found themselves in the unfamiliar position of being joined by the majority of the national audience whom were also cheering for the Irish. At the conclusion, ND fans found themselves in an all-too-familiar position of heartache. And while it is far from fair to say that moment was the singular reason that the 2014 season fell apart, it became hard for even the most level-headed Irish fan to not turn back, at some level, to that narrative.

But regardless of the myriad reasons of why the Irish fell from grace, Everett Golson continued to commit the mortal sin of turning the ball over. Any moment in which the Irish appeared posed to stop the bleeding and turn it all around, Golson coughed up a fumble or threw an interception. As the turnovers and losses mounted, fans remembered that Malik Zaire now held the popular position of backup quarterback that Everett once did.

Only this time, unlike Golson’s run at that popular position in 2011, Zaire had no redshirt to protect. Rees had already preserved that in 2013. The future could be now if Brian Kelly willed it and many fans wanted that trigger pulled in the worst way. Kelly resisted until Golson put together a performance so poor against Southern Cal in the season finale that Kelly simply had no choice but to pull his struggling QB.

For the bowl showdown against LSU, Kelly said that both quarterbacks would play, although Zaire got the nod to start. While both put together solid performances, Zaire stole the show. There would be a quarterback competition for 2015. It would be tight. There would be great reasons to start both and the decision for Kelly would be borderline impossible.

However, Kelly’s decision would become just as easy as it was in 2012 and around the same time as well. Instead of an unfortunate conclusion to an end-of-the-year party, Golson simply decided to part ways from Notre Dame.

Perhaps Golson felt like he saw the writing on the wall. After all, he once walked in Zaire’s shoes. Maybe it just felt like a matter of time before he would be overtaken.

Perhaps Golson just didn’t get along with Brian Kelly. Maybe the yelling and screams post mistakes just sat wrong with him. Despite Kelly moving to a more gentler approach, maybe even those non-purple-face conversations still didn’t set right for one reason or another. Maybe Kelly sticking with his QB competition, instead of giving him the starting job outright–or even saying it was his job to lose–made him look elsewhere.

Perhaps Golson didn’t feel like Notre Dame was the right spot for his fifth year. Maybe after already going through the ringer once with the academic honor code was enough. Maybe he saw getting the undergraduate degree from ND as one accomplishment done on the checklist and now the lion’s share of attention should go to football and he wanted to attend a school in which he felt would provide that.

Perhaps Golson simply saw this as the best possible football move for him. Maybe when everything else was considered Florida State would give him the best shot at the pros.

I don’t know what went through Golson’s mind. I’m not even going to pretend that I do nor try to speculate what was the reason of why he decided to leave or why he felt Florida State was his best option. For all I know, Golson’s final decision has nothing to do with what I wrote above.

I do know that when I examine this from an emotional perspective as a Notre Dame fan, I can come up with only one conclusion: this sucks. Golson’s decision to go to Florida State simply rubs salt in an open wound.

While I am certainly a proponent of letting hate rule cheering interests in college football (see also: Michigan), I don’t know where I’m going to stand on Golson. I penned this post as something of a history of Golson’s time at Notre Dame not to bury the lede, but to examine the emotional roller coaster that I and all Irish fans have been on in the past few years. And it’s that journey that has me wishing for both Golson’s success and Florida State’s failure at the same time and hoping for one over the other as if I’m on some kind of strange pendulum of fandom.

If I can remove the emotions from this situation, I can see that this move makes a lot of sense for Golson and will likely work out just fine for Notre Dame as well.  And Golson, much like many other athletes, doesn’t have the same emotional investment tied into rivalries and hatred as fans do. For them success is success and failure is failure whether it is against a rival, a cupcake, or in a title game. Golson’s end goal is to get to the NFL and if wearing garnet and gold makes more sense than blue and gold in 2015 to achieve it, then that’s what he will do.

Malik Zaire will move from the most popular position to the most scrutinized just as Golson did. Hopefully, in 2016, he will become the first quarterback in the Brain Kelly era to start in back-to-back seasons. Hopefully, when DeShone Kizer and Brandon Wimbush find themselves in the popular role of backup quarterback, Zaire’s struggles (and let’s not kid ourselves, he’s going to have some–even Jameis Winston threw 18 interceptions in 2014) won’t be as severe as Golson’s were and the fanbase doesn’t see Kizer or Wimbush as the panacea to cure all Irish ails.

To put it another way, I don’t want to do this dance again. I’ve seen Golson deliver the joy of a national title run and next season I’ll have to watch him wearing hated colors. Regardless of what happens next season Golson’s performance will be compared with Zaire’s. Kelly’s ability to coach and develop quarterbacks will be heavily scrutinized in comparison to Jimbo Fisher. It won’t matter that Zaire barely has over 100 snaps of game experience or that Kelly wasn’t able to coach Golson for connective seasons. The narrative, whatever it will turn out to be, will rule just as Golson’s turnovers ruled the 2014 struggles.

For now, this will sting and the only thing that will soothe the pain will be for Zaire to win to help me forget. I’ll still have some fond memories of Golson’s time with the Irish and when it is all said and done, the stop at Florida State will likely be a passing thought. I won’t begrudge anyone cheering him on, those that want to see his failure, or those that could care less. Regardless of fan emotions, 2015 will be a season to move on.