The end of an era has come. Officer Tim McCarthy of the Indiana State Police is stepping down from his post as driving safety liaison for Notre Dame home football games according to a post from WNDU.

McCarthy, the man who makes Mo Rocca blush with witty quips and puns during his late-game safety advisories has ended a 55 year run in the press box. The former Indiana State Trooper also served as a traffic cop, helping to alleviate congestion from the post-game exoduses away from Notre Dame Stadium. His purpose was to inform and remind fans to drive safely and sober, but he became far more than just a warning.

I remember growing up as a child sitting in section four and hearing his lines. The one that won me over must have been in the late ’90s. I don’t remember the season but I remember the line: “Be careful zipping up the highways…you just might get caught.”

For a boy in his mid teens this was absolutely the greatest thing I had ever heard. It was around the same time every kid in middle and high school was quoting “Franks and Beans!” in respect to the very famous There’s Something About Mary scene. The idea that a police officer delivering traffic safety tips over the PA system of Notre Dame Stadium drilled the all too absurd and corny line into memory. It still makes me giggle.

What I’ll remember the most, though, is the utmost reverence for the moment between the third and fourth quarters. For anyone who has been to a game in Notre Dame stadium over the last five and a half decades, you know exactly what I mean. No matter what the score, no matter how much tension is running through the stands, there’s a split second and the loud speaker activates:

“May I have your attention, please.”

Then the crowd goes quieter than a fan in the gold seats. 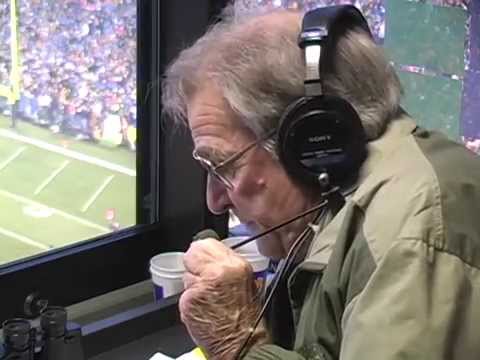 Officer Tim McCarthy addresses the stadium during a game.

With a brief explanation about the illegality and danger of drunk driving, McCarthy ends on a high note: “Remember: The automobile replaced the horse…but the driver should stay on the wagon!” (This is reportedly the very first line delivered by McCarthy during the opening game of the 1961 season)

The crowd erupts in groans, laughter, and applause.

This tradition is so entwined in my life (and you can ask the lovely future Mrs. Whisky to verify) that every time I fly into Orlando International Airport and an announcement comes on, a different man says “May I have your attention, please?” I raise my arms into the sky and make a breathy “Ahhhhh!” noise replicating the excitement of the stadium at the sound of McCarthy’s voice.

I’ll never be able to hear that phrase and not think of my days in section 4 or my fantastic four years in the student section. Officer McCarthy’s announcements are as much a part of Notre Dame football tradition as slapping the “Play Like a Champion Today” sign and lighting a candle at the Grotto. It’s getting a sandwich at the Knights of Columbus and watching the band step off.

To all of you who never got a chance to watch a game from inside the stadium walls, I’m sorry that you’ve missed out on this tradition. It truly was special and unique to Fighting Irish culture. To those of you who were lucky enough to catch a game, join me in thanking Officer Tim McCarthy for giving us his message, his humor, and most importantly his time.

Remember, Tim, now that you’re fully retired, regular naps can prevent old age…especially if you take them while driving.