DISCLAIMER: Remember, folks – we’re not here to hate on the SEC. The SEC packs a powerful brand of college football, has some of the greatest rivalries and traditions in the game and will forever dominate the BCS-era National Title trophy case. The “SEC is AWESOME Theory” is centered around the statistical advantage the SEC has gained and continues to gain via a financially driven media machine that produces biased polls, rankings and marketing.

Breaking news! The Theory has obtained some EXCLUSIVE footage from the SEC-WEST-WING of ESPN headquarters in Bristol:

“General, the machine has locked us out – it’s sending random numbers to the silos!”

Let’s do some AWESOME! 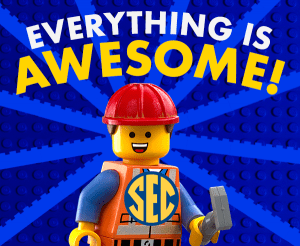 (3) Auburn 38 / (NR) Texas A&M 41 – the “snap heard ’round the world” ended Auburn’s hopes of maintaining their hold on the #3 spot in the CFP rankings. The Aggies jumped out to a quick fourteen-point lead in only two minutes and seven seconds. Undaunted, the Tigers answered with two scores of their own in the final seven minutes of the first quarter but they would never come as close again. A&M freshman Kyle Allen threw for four touchdowns and nearly 300 yards in just his second career collegiate start. The Ags had lost three straight SEC contests before utilizing their 7-point conquest of the University of Louisiana-Monroe to springboard into Auburn on a high note…with nothing to lose. Auburn had made believers out of many doubters with close but admirable win over Ole Miss the week before. Their squeaker over the hapless Gamecocks caused some raised eyebrows and it seems they may have been warranted. The Theory did mention this upset as a possibility – where did the teams end up?

(5) Alabama 20 / (16) LSU 13 – fifty yards is a wide berth in just about any situation but kicking the football through just such a gap turned out to be too much for LSU kicker Trent Domingue. After recovering a TJ Yeldon fumble on the Alabama 6 yard line, with only minutes to go in the game, LSU delivered what they have all season long – moments of brilliance with flashes of ineptitude. A devastating 15-yard personal foul by an offensive lineman resulted in only three points for the Tigers and with nearly an entire minute left on the clock, that three point lead got even smaller after Domingue’s duck-hook. The look on Les Miles’ face said it all before Bama’s Blake Sims  used his legs and arms to position the Tide for their tying field goal as time expired. The momentum carried over into OT for Saban & Company as they can now champion their defeat of #16 LSU as their most powerful quality win of the season.

Auburn’s battle with Texas A&M was a great game. If we’re being honest, it was yet another  AWESOME SEC game. But if you strip away the conference logo, you still have the third ranked team in the country going up against an unranked and floundering squad from College Station – a team who bested ULM by only seven points just seven days before. Auburn maintained their position within the Top 10, dropping six slots to #9.

Even if you wanted to argue that point-differential should disqualify the Buckeyes and Bruins losses from equitable consideration, I would still wonder why Oklahoma fell seven slots after their 4-point loss to #25 ranked TCU for their first loss of the season. At ease, folks – the Theory allows this all to make perfect sense. Make no mistake, a loss to any of the unranked teams above is SIMPLY NOT AS AWESOME as a loss to an unranked SEC team. PERIOD.

Alabama has one loss and can claim victories over teams ranked #16 and #21. Behind Alabama, you have Arizona State who has victories over #10, #11, #16 and #17 ranked teams at the time of play. You also have Baylor, who have W’s over #9 and #15 ranked teams. In fact, every team in the CFP Top 10 has a victory against a Top 10 team – except for the Crimson Tide. The only reason I can arrive at for their position ahead of these schools is that the Tide were simply already there. No, they haven’t impressed too much this season. Yes, they entered 2014 with the ever-generous #2 ranking from their friends at the AP. Without being the winners of the National Title Game. Or the losers of that game. Or the winners of their bowl game. Or the winners of their conference. Or their division. But their head coach IS Nick Saban and they DO have the one of the top recruiting classes every year – and, well, that should be good enough. They ARE Alabama and, as long as they keep winning HUGE games over the country’s best teams, they should hold fast. Only they haven’t.

Kudos to the Committee for pushing TCU past the Tide for the #4 slot. This is a curious occurrence that suggests that perhaps, PERHAPS this is a result of rewarding either “big wins over big teams” or teams that “just keep winning”. It’s one or the other. If you barely beat an unranked Arkansas team as Mississippi State, you stay right where you are at the top because you found a way to just keep winning. What if you battle back and “just keep winning” by handily beating a Top 25 Louisville team on a Thursday night, 42-31? You drop, of course. Oy.

Good news, Theory students. There are now two three-loss teams in the CFP Top 25! Can you guess which conference they’re both from? Better luck next time, Colorado State.

AWESOME Games to Watch This Week

(1) Mississippi State / (5) Alabama – Saban and his padawan seized upon multiple cajun brain-farts last Saturday and are on the verge of heading towards the Iron Bowl with only one loss after next week’s scrimmage with current silver medalists in the FCS Southern Conference, Western Carolina. Mississippi State should win this game. They are the chosen ONE of the chosen ones, the last undefeated man standing from the best division in the best conference in this corner of the Milky Way. They sauntered into their home stadium two weeks ago and did what the MIGHTY TIDE could not do – they beat last-place Arkansas by a FULL touchdown instead of just one point. They also bested the Hogs in regulation, a feat that even the mighty and once-again-ranked, three-loss Aggies can’t even claim. After tuning up against the University of Tennessee-Martin last week, the Bulldogs of Mississippi State should march into Tuscaloosa and win. Heisman candidate Dak Prescott should be able to impose his 18:7 touchdown to interception ratio dominance and take control of the division. State has passed every test and picked off the Aggies, Tigers (War Eagle variety) and LSU before it became trendy for everybody else to do it, too. They came from the ether of unrankedness and leapfrogged to the top of our hearts with wins over those three teams, from their same conference, that now have eight combined losses…and yet Alabama is favored by eight points. As students of the Theory understand, this could result in another status-quo game, where both winner AND loser maintain their Top 5 presence despite the binary outcome of one winner and one loser and the undefeated or one-loss records of teams from other conferences. You’ve been warned.

(9) Auburn / (15) Georgia – Entrepreneur Ted Gurley will return to the Dawgs’ backfield and it couldn’t come at a worse time for the defensively challenged Auburn Tigers. This looks to be another insanely entertaining SEC shootout but it should be noted that Auburn will be without their star WR, D’haquille Williams. That being said, the home team in this series is usually the endangered squad, so look for two fired-up teams to bring their A-game. Look for a solid ranking boost for Auburn should they handle the Dawgs.

(17) LSU / (NR) Arkansas – another chance for Arkansas to show the world that the rest of their conference just isn’t as AWESOME as everybody thinks they are. LSU should win though, right? I mean, they pretty much beat Alabama – the #5 team in the country – last week, just seven days after handing Bad Bo Wallace & the Rebs their first loss of their AWESOME season. It will be THAT team that rolls into Razorback Stadium, yes? Not the Tigers who beat the Alachua Lizards on a last second field goal, right? As one of only two 3-loss teams to grace the Top 25, there will be pride on the line for Les Miles on Saturday but don’t forget that Arkansas is actually favored to win this one by almost a field goal. Do what you’re supposed to, Arkansas – I dare you. But if LSU prevails? Amazing underdog win by LSU against the AWESOME last place team in the SEC-west. BOOM.

(24) Texas A&M / (NR) Missouri – “They’re baaaaaaaack!!!!!” Texas A&M has wiggled its way back into the Top 25 as that other SEC-west team with three losses. Missouri has the misfortune of being a member of the geographically-challenged SEC East, and is therefore an afterthought to the CFP Committee with their 7-2 record. This game is in College Station, a very hostile environment unless you’re Bad Bo Wallace. Who’s BAD, MIZZOU?!

At this point, Texas A&M and LSU can’t make an impact on the CFP picture. What they CAN do is resurrect their disappointing seasons with victories over unranked teams and be utilized as sacrifices at the strength-of-schedule alter of the SEC-west. Remember, if you only play each other but everybody is always ranked…everybody wins. Couple those wins with an epic OT win by [heavily favored] Alabama over #1 (!!) Mississippi State AND an upset (???) of #15 Georgia by the visiting #9 Tigers…..and the unfortunate scheduling of all other teams may very well yield:

Oregon is idle, you see, and Florida State is playing The U. If TCU, Arizona State and Ohio State “struggle” (a.k.a. don’t win by more than three touchdowns and pass the weekly eye test) in their games more than Mississippi State, Alabama and Texas A&M did with the Hogs then this is a real possibility.

Enjoy the games, stay safe and we’ll see you next week!

Latest posts by SouthernIrish (see all)