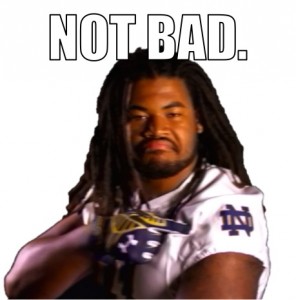 No, this will not be a post that will excuse Notre Dame for a rather terrible performance on the road against Arizona State. No team should turn the ball over five times and expect to win against a ranked team. Period.

Beyond the turnovers, Arizona State put a hell of a game together, consistently putting pressure on Golson, notching seven sacks and giving him happy feet the whole game.

In the first half, Arizona State ran at a totally different speed than the Irish defense that looked gassed playing on short fields with no rest. Perhaps the injuries and suspensions that the Irish have faced in those crucial positions (KeiVarae Russel and Cody Riggs) finally caught up to the Irish and were yet another mitigating factor in this disaster.

While the Irish did manage to put a comeback threat together, once they got within a single possession of Arizona State, the heat was turned back on in the desert and Arizona State pulled away. Playoff dreams were dashed. Any angst over how the committee underrated the Irish and their strength of schedule proved a fruitless exercise.

While this loss stings, and make no mistake I’m incredibly bummed by the entire affair, all is not lost. The fact of the matter is that an Irish team, young and ravished by injuries, still has a chance to finish 10-2. Such a finish would be a record well beyond what most ND fans expected at the beginning of the season. Winning out, and winning a big bowl game against a quality opponent to build momentum for 2015, is now the goal.

Now is not the time to jump off the ledge and go into full-blown “bench Golson” panic. While he has eclipsed the amount of turnovers that Tommy Rees had last season, he has also eclipsed the total number of TDs that Rees had all season and there are still more games left (Rees had 27 TDs, Golson has 24 passing TDs and 7 rushing TDs for a total of 31).

Yes, this game was terrible for Golson. It’s easily the worst game of his Notre Dame career. However, Notre Dame simply does not pull out some of the wins that they have this season without Golson. Everett giveth and Everett taketh away.

There is simply no guarantee that subbing in Malik Zaire automatically cures all the Golson turnover issues. There is this perception with many football fans that plugging in the backup quarterback will somehow magically do this. That just simply isn’t the case, especially when you consider that this is a quarterback who has only lost three games in his entire career.

If Golson continues down this path and appears to regress even further, sure, let’s have that discussion. Hell, I’m perfectly fine having it this offseason even if Golson runs a clean sheet the rest of the way. Pulling the plug before the season is over simply seems like folly.

One of the main reasons that Golson had those turnovers is because of the pressure that Arizona State placed on him or by making plays at the line. If the roles are reversed, I guarantee we don’t sit here saying Taylor Kelly is terrible, but rather praising the our defensive line for transcendent play. Trying to place this loss solely on Golson negates what Arizona State accomplished on the field.

Also, let’s not forget that Golson is also a large part of why Notre Dame even managed to make this game in the second half.

This loss sucks, but there can be a middle-ground between “championship contender” and “out of the top 25” which, again, is where many (myself included) thought the Irish would land preseason. And here we are.

Now is not the time to jump of the ledge or burn it all down.