Beginning in 2014, a playoff selection committee will determine which four college football teams play for the national title. Some are skeptical of the committee, so we — the Elvii of college football — have joined together to present our weekly playoff nominations. We call it the T.C.B. Poll.

Each week, the T.C.B. Poll is an aggregate of all our inputs. Scroll down to see individual selections and opinions.

January 8, 1935 a very special boy named Elvis Aaron Presley was born in Tupelo, MS…not since that day has anything so great happened in Mississippi until Saturday when Mississippi State jumped to the top of the College Football Polls.

Here’s what I think is going to happen the remainder of the season and how I got to my top 4. I think Mississippi State will win the rest of their games including the Egg Bowl vs. Ole Miss and the SEC Championship vs. probably Georgia. So Mississippi State is #1. Florida State will win out the rest of their games and be #2. I also do not see Baylor losing the rest of the way and they will be #3….so the real question is who gets to be #4. With Florida St beating Notre Dame and Mississippi State beating Ole Miss there will be a host of 1-loss teams. In the first year of the College Playoff system will they put two teams from the same conference and even the same division into the top 4? I vote no.

Therefore with the SEC, ACC, and Big 12 already represented I think the Pac-12 champion will get the last spot and therefore Oregon is my #4 ranked team. 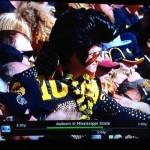 At least the teams are making this easier for us as they whittle themselves down. The fun will start when we have to figure out the best 1-loss team. All hail our new football overlords from the Magnolia State. (Sorry Auburn Elvis).

Yes I was suited up for our win over Indiana and made the ESPNU broadcast. Apparently, I also made the highlights over on CBS.

The College Football Elvii join forces, and the state of Mississippi finds itself the darling of the rankings? That correlation is “Too Much” to be a mere coincidence.

I can’t find any other undefeated team to rank in that #4 spot, no sir…