Jack Swarbrick wore the biggest grin on his face since perhaps the conclusion of the 2012 regular season. His masterful plan now public, he opened his bottom desk drawer, revealing a bottle of scotch and glassware. Certainly some might think scotch before ten in the morning on a Thursday a little concerning, but not this day. This is a day for celebration.

After pouring his morning beverage, his phone predictably rang. He had been waiting for this.

“YOU SORRY SON OF A BITCH!” screamed the voice on the other end.

“Well, good morning to you too. Now who might this be?” asked Jack, full well knowing the angry voice was none other than Dave Brandon.

“Why so tense today, Dave? Why the angry phone call. Did someone forget to pay for a pizza?”

“Indeed it isn’t. An unpaid pizza is an unforgivable crime. Hang on a second,” Jack said trying to contain his laughter as he screamed across the office to no one, “DID ANYONE ORDER A PIZZA? ANYONE?”

“Jack, stop being an asshole. This joke is never funny.”

“Hold, on an intern just walked in,” half chuckling to himself Jack continued talking to thin air “You ordered the pizza…ok…you paid…forget to tip…OH!” Jack returned to the phone again to torment his victim. “Dave, we did in fact order a pizza, but I was just told we’d never order the shit that is Dominos when we have a Pizza Hut on campus.”

“DAMN YOU, JACK, STOP! YOU KNOW THIS IS ABOUT OHIO STATE!”

“Why are you pissed at me for failing a two-point conversion last season? I had nothing to do with that.”

“Jack, I don’t understand why you are being such a dick right now.”

“Oh you don’t? Hold on let me send you an email that will explain it.” Swarbrick already had the draft ready to go. One click of the mouse and yet another needle would antagonize Brandon.

Over in Ann Arbor, Brandon opened Jack’s message to see only this: 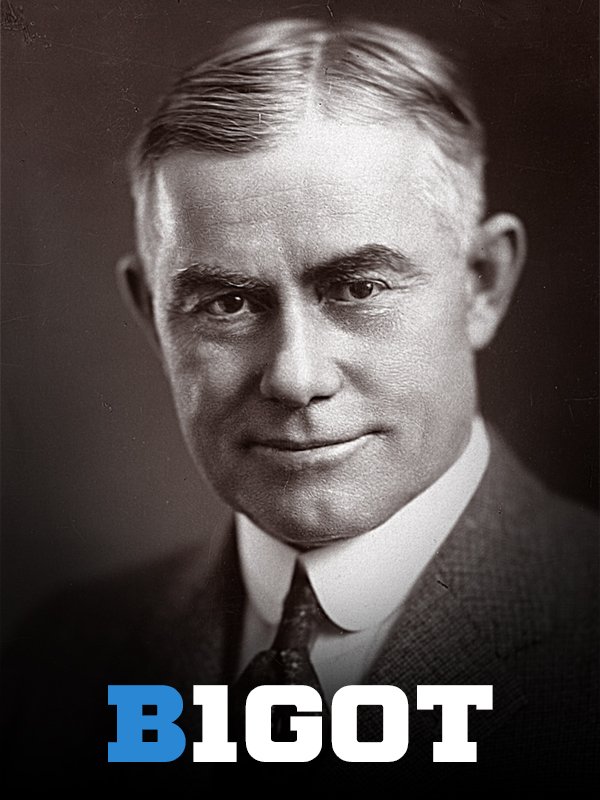 “Can you and your school not let that crap go? It’s been a century for crying out loud.”

“Let it go? Look, Princess Elsa, if it weren’t for Yost’s irrational hatred, we wouldn’t be having this conversation right now. We could be an annual conference opponent, but noooooo–some small little Irish Catholic school beat Yost’s juggernaut so he took his ball and went home.”

“Yes, yes, I know the story, Jack. Then he blackballed you from the Big Ten while refusing to schedule you. We know. What does this have to do with scheduling Ohio State?”

“Everything,” said Jack pausing to take a sip of scotch, “Look, I know when football gets involved, academics go by the wayside over there, but even you should know that every action has a reaction. Every decision, a consequence. Yost put the wheels in motion for our independence and no one at Michigan ever tried to correct the course. So by the time the Big Ten came knocking in the 90’s, we preferred to close that door rather than give up the national schedule and rivalries that we had in place. You know, the one that Yost forced us into in the first place.”

“Again, Dave, that decision in the 90’s mattered two decades later when Jim Delany decided he wanted to turn the college football upside down with his conference expansion. Every action has a reaction, and in this case, the eventual reaction was the death of the Big East. So now, instead of Notre Dame being a happy little member of the Big Ten since the early 1900s or even in the 1990s with a nine-game conference schedule, I’m forced to start looking for a place for all our other sports to play. I brokered the best deal that I could, but the five game agreement with the ACC practically gave us an eight-game conference schedule of our own with Southern Cal, Stanford, and Navy. Something had to give, Dave.”

“Do you like hearing yourself talk, Jack? You kicked us to the curb and scheduled another Big Ten team with that so-called ‘impossible’ to handle nine-game conference schedule. Somehow it worked out just fine.”

Jack’s smile somehow grew even larger. Now was the time to lower the boom.

“Well, I suppose you have a point. There’s only one small issue. If you recall, back in the summer of 2012, you wanted a two-year break from us. It was like that phone call you get in a relationship when you say you want to ‘see other people’ for a bit and see if you can’t pick up right where you left off. But even prior to that in 2011, you saw the nine-game conference schedule coming and told people that you simply couldn’t live in a world in which the Big Ten forced you to have only four home conference games and one of your other three non-conference games, namely us, would be in South Bend. That would leave you just one home game short of your magical seven home games, which I figure would be a favor to you anyways considering how your ticket sales went this year. The way I see it, we did you a favor.”

“This is the same load of crap you said in 2012 when you canned the series, Jack. You still need to explain Ohio State.”

“Oh that–well you remember that BS you feed to the press that I blindsided you, even though I freakin’ called you before the game to let you know it was coming? Or Brady Hoke calling us ‘chicken’ for the decision? Or someone thinking they were cute by playing the chicken dance over the Big House PA last year? You’ve all handled this situation about as well as Yost handled his first loss to ND. After a century-plus of our relationship really being about Michigan’s convenience, you wanted to make us the bad guy. And mang,” said Jack slipping into his best Razor Ramon impression, “if you want us to be the bad guy, chico, we are more than happy to play along.”

“Wait, wait,” said a now slightly confused Brandon, “You mean to tell me you are actually petty enough to schedule Ohio State out of spite?”

“Call it petty if it makes you feel any better. I call it righteous rage and a well played middle finger in your direction. I mean, have you read our press release yet? I called this a great move from a strength of schedule perspective, just so other people would take a look at just how far mighty Michigan has fallen. Brian Kelly even called it an even of “huge national significance” just to throw some shade at Hoke’s comments earlier this season. While you chose to very publicly and loudly paint us in the worst light possible, we prefer to respond with a calculated, under-the-radar approach and have everyone else do the dirty work for us. The nation is already laughing at you and I haven’t said a single direct, derogatory insult to Michigan in public.”

“We are going to beat the living piss out of you Saturday, Jack. This will move will motivate Michigan in ways you can’t even possibly imagine.”

“Keep telling yourself that, Dave. Remember, the last time you came to South Bend, our best player and fans rallied around the death of someone that didn’t even exist to take you out. But this hate? It’s real, it’s damn real. If you think our boys don’t want to paint our new turf red with Skunkbear blood and wash it with the tears of the Ann Arbor faithful, you’ve got another thing coming. Once we hand you the beating you deserve, you’ll go back to Ann Arbor and, Dave, your failure as Michigan’s AD will be complete. Angry fans will beg you to get ND back on the schedule so they can have hope to end the torment of their final loss. You’ll try to come crawling back to us and I won’t so much as pick up the phone as long as you’re still the AD.”

The other end of the line fell silent. All Swarbrick could hear was heavy, angry breathing and a pound on a desk from the other end. He could restrain himself any more, he had to laugh.

“Tell you what Dave, just to prove I’m not that much of a jerk, I have a couple more presents for you. You sound really tense. You need a moment of zen–well, actually around here, we call them moments of Nix–but anyways, let me send you another quick email to make you feel better.”

The silence on the line was broken up by a few mouse clicks and the sounds of the video Jack sent Brandon:

After hearing what he swore was a monitor being thrown across the room, Jack continued, “And I’m sure you need a drink or two while you’re here witnessing the death of the program you run. So there’s an entire crate of Arrogant Bastard Ale just for you. Don’t worry, no one will touch it, it’s got your name on it after all: Arrogant Bastard.”

The next sound Jack heard was the slamming of a phone and a dial tone. Jack gently placed his phone back in place and finished the rest of his drink as reward for a job well done. His eyes went to the corner of his office, “I’m surprised you managed to stay quiet this long, Everett.”

“And screw up that epic trolling effort? Never.”

“Well, my role in this play is over. It’s time for the final act, Everett. I usually don’t call players into my office like this. I don’t want people to think I’m interfering with Kelly’s job like that idiot that just hung up on me. All I want to do is ask you a simple favor. I need you to destroy them, Everett. You have the chance to claim final victory on over a century’s worth of piss-poor relations with these assholes. Break their spirit. Leave no doubt.”

Jack paused as he examined his empty glass before returning his gaze to Golson a final time.