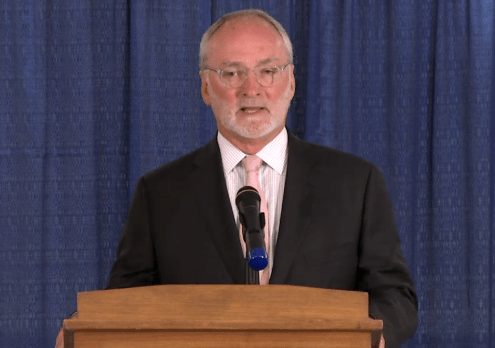 On the list of things that I was concerned about for the 2014 season, academic fraud ranked somewhere around the same level as a meteor strike in South Bend.

Academic issues? Sure, based on recent history, that was definitely in the back of my mind, but seeing Fr. Jenkins and a bearded Jack Swarbrick announce to the world that Notre Dame was investigating serious academic fraud? Not a chance in hell.

Make no mistake, I’m absolutely furious. Not at DaVaris Daniels, Kendall Moore, KeiVarae Russel, or Ishaq Williams, but at Notre Dame. Simply put, ND failed. Sure, they caught it before the NCAA or a media investigation did, but that doesn’t change the fact that somehow this slipped under the radar to the point that a full-blown investigation is required. No one yet knows just how wide-spread this is or how long its been going on.

Even more upsetting, at least to myself but probably not the media or peanut gallery, is that there are apparently multiple non-student athletes involved in the fraud scandal. I had to bust my ass to get the degree hanging in my office and I’m incredibly proud to have it. The fact that there are students on campus that are looking for a shortcut to avoid doing work, pisses me off to no end.

There is no amount of spin in the world that anyone can deliver to remove that.

At Notre Dame fans and alumni, we’ve taken an immense amount of pride in not sacrificing academics for athletic glory. So much so that a common narrative arose that Notre Dame simply couldn’t keep up with the top programs in college football anymore. 2012 was our year to laugh in the face of that claim. Remember this?

Fast forward to now and there are rumors circulating about, and rumors Jenkins and Swarbrick couldn’t deny, that this fraud happened during the 2012 season.

Simply put, someone needs to be held accountable for this. Anyone that had a hand in it or turned a blind eye to it should be gone. Thankfully, I have faith that Notre Dame will indeed to this.

As upset as I am about the fraud, I can see it’s clear that Notre Dame still takes their academic integrity seriously. The reason isn’t just because they took swift action (they received a report about this July 31, just a little over two weeks ago), but rather because they are preparing for the absolute worst possible scenario.

While many were likely frustrated that there were no concrete answers to the big questions of how long this has been going on or how many people were involved, ND’s desire to find out how deep this goes is a desire to root out the entire problem and handle it for good. They could have just as easily treated the incident reported to them this summer as a one-time occurrence and be done with it.

Going that route though would invite Charles Robinson from Yahoo! Sports to get curious about what’s going on and blow the whole thing up. Imagine the egg on our face in that situation.

Instead, ND will perform their due diligence and restore the integrity that we all hold so dear. If we find out that multiple players on the 2012 team were involved and we have to vacate every single one of those glorious wins? So be it, even if it costs us the all-time winning percentage battle with Michigan. The mission of the University is far more important than a record.

Taking all that into consideration, you would think the narrative currently being spun by the college football pundits would reflect some of those facts. Sadly, this isn’t the case. Everyone seems to be looking for their “turn in your tiara” moment to take ND to task.

Much like Rick Reilly in 2012, everyone is missing the mark. ND is just like everyone else and will tell you so with glee. They are all so drunk with joy that even the most logical, well-reasoned prose can’t correct their blurred vision. ND might as well be Southern Cal or North Carolina as far as they are concerned, regardless if those perceived parallels couldn’t be any more divergent.

That goes double for the fans that love to hate us.

But that’s where you come in, loyal reader. Because, quite frankly, we are all going to be faced with a deluge of shit thanks to this mess. You won’t be able to correct the narrative. Don’t even try. Truth be told, even I’m not. This piece is preaching to the choir, not trying to convert the non-believer.

Don’t make excuses for the idiotic mistakes that these kids have made. Be glad happy that you are a fan of a school that cares enough to face these issues head on, but don’t trumpet it as an excuse for how this is somehow all okay. It’s not. This attack on academic integrity strikes right into the heart of what you hold dear about Notre Dame.

Don’t get salty at opposing fans for having their moment on the high horse. Take your verbal beating now and hope that you can laugh at them come gameday when it matters. You have no leg to stand on in a cheating debate right now. The sooner you realize that and try to focus on what actually happens on the field, the more sanity you will retain.

Above all else, maintain that, much as Fr. Jenkins stated in his presser, everyone involved in this is held accountable for their actions. Because if that doesn’t happen, the show of action and concern will be nothing more than a farce.

Until then, let the situation play out and let the talking heads say what they will. Let them bring up past sins if it makes them feel better. Take it all in stride.

Next man in. Rice is only two weeks away.