Some of the folks at Reddit, specifically those of the subreddit /r/cfb, had a little bit of offseason fun. They did a very unscientific poll asking their fellow redditors where they were from and which college football team they hated the most.

The poll had some issues with people vote spamming and the whole thing really being another case of the internet being the internet. But because of internet reasons that didn’t take another redditor from making the following map from the results: 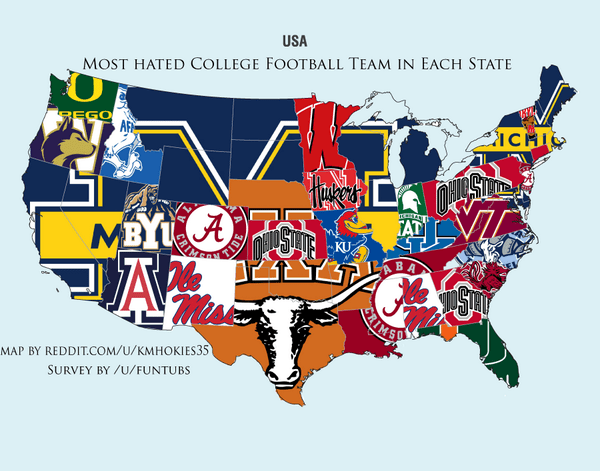 Clearly, everyone hates Michigan, including Michigan.

Is the poll scientifically valid? Not in the least, but that doesn’t mean we can’t have a lot of fun trolling Michigan with it.

Or at least that was the logic I had when I posted this on Twitter last night:

For one reason or another, this tweet was picked up by Phil Hecken of Uni Watch and he tweeted it to the masses. Again, because this is the internet and no one really takes the time to follow the news to the source, Phil’s followers were immediately drawn offsides by this exercise in offseason boredom.

Due to the fact folks on Twitter are also too lazy to remove other innocent bystanders in tweets, my mentions became flooded with hilarity. Here are some of the highlights that cracked me up:

@PhilHecken @RedditCFB @HLS_NDtex @LarryVonKurtze They keep doing these maps, but can never get any of them right.

@PhilHecken @RedditCFB @HLS_NDtex @LarryVonKurtze lots of weird here. Vermont hates Maryland? Georgia hates OSU? What did MSU ever do to IN?

@PhilHecken @RedditCFB @HLS_NDtex @LarryVonKurtze this is severely flawed. I feel like Notre Dame might be the most hated in a lot of places

In the end though, I believe there is one hate map that we can all agree on:

EDIT: And /r/cfb heard the cries of injustice and took out the spam votes. Here’s a more accurate map if you’re into that sort of thing

By popular demand we removed the spam votes and made a REAL map of "Most Hated Team by State" pic.twitter.com/iODSXaa07r