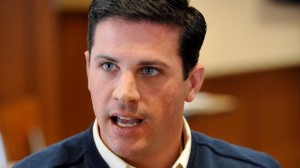 No, that title isn’t click-bait. Notre Dame football fans should all be genuinely excited that yet another coach has been plucked from the ranks of Brian Kelly’s staff.

First, it was Chuck Martin to the “Cradle of Coaches” at Miami University and now, Bob Diaco is off to take the reigns of UCONN, securing a 5 year, $1.5 million/year contract according to Bruce Feldman of CBS Sports.

UPDATE: Diaco’s final contract is now a confirmed 5-year, $8 million contract. Diaco’s contact also includes a one month salary  as a bonus for making a bowl game and up to $400,000 bonus for winning the National Title, and a $500k retention bonus if he remains UCONN’s head coach at the end of his contract (Dec 31, 2018).

Yes, I am slightly bummed that we are losing a Broyles Award winner and a coach that is universally loved by his players. I know that many female Irish fans will also be heartbroken that Diaco and his perfect hair will no longer be a regular appearance during ND telecasts (stay strong, loyal daughters!). But still, we should be happy about this.

In his fourth year, Brian Kelly has now produced three head coaches from his staff. College football as a whole is taking notice of the coaching staff in South Bend and, as Kelly has said several times in his pressers, he knows his guys aren’t going to make lateral moves. If you want a coach from Kelly’s staff, you’d better be offering him a head coaching gig.

Compare this to the Weis era in which defensive coordinators were fired, swapped out, and made co-coordinators seemingly every year. As for the rest of his staff, David Cutcliffe, Duke’s current head coach, is the only former Weis staffer to still have a head coaching gig. However, Cutcliffe never really worked a season under Weis as a heart surgery forced him to resign before the 2005 season, but he resurfaced later as Tennessee’s offensive coordinator for two years, which eventually landed him his current head coaching gig. Michael Haywood also had a shot at a head coaching gig, serving as Miami University’s head coach for two years, getting hired by Pitt, but was arrested for domestic battery which immediately halted his career. Rob Ianello was the only other coach to get a head coaching gig as he was hired by the Akron Zips after Weis’ firing; however, after two seasons he was fired and is now a recruiting coordinator for Weis’ Kansas Jayhawks.

Errata: As a comment points out below, Brian Polian is a Weis staffer with a head coaching job. Much like Cutcliffe though, he didn’t get his head coaching gig until he served as an assistant on another staff. After Weis was fired, Polian was hired by Jim Harbaugh to serve as Stanford’s special team’s coach in 2010. David Shaw retained Polian for the 2011 after Harbaugh went to the NFL. The following season, Kevin Sumlin placed Polian on his Texas A&M staff in the same role. From there, he finally catapulted into a head coaching job at Nevada this season where he has gone 4-8.

Not exactly an impressive coaching tree to say the least.

Time will tell how successful Kelly’s tree will be. While Charley Molnar isn’t exactly lighting the world on fire at UMass (only 2 wins in two seasons, ouch), both Martin and Diaco represent a great opportunity for some solid roots to form. From a program building perspective it’s great as it makes an assistant coach job at Notre Dame even more attractive. Come to ND, prove you have what it takes, and teams will call — not exactly something that we’ve been able to say for the past decade-plus.

The two vacant coordinator slots also presents an opportunity for Kelly to breathe a bit of new life into the program while also maintaining some level of continuity. The overall path of the program won’t change or require a complete upheaval, but injecting new blood into the coaching staff can be a great motivational tool to push a team to even greater heights. After all, now there is a new guy to impress and his opinions could be drastically different than the last coach.

Even if Kelly promotes from within, the same logic stands. Even though with a higher level of familiarity, there is still a new guy to impress and it’s still one whose phone could very well ring in another season or two with a head coaching gig attached on the other end.

Simply put, both players and coaches will be pushing for that next step and constant competition breeds success.

Looking even further out into the future, this coaching tree could very well produce the next head coach of Notre Dame when the Kelly era eventually comes to an end. With real head coaching experience under their belt, Martin or Diaco (or even someone else in the future) could package their familiarity with Notre Dame into a solid resume that would result in a great future hire.

Basically, that kind of a situation prevents a Bob Davie, who got his first head coaching experience with the Irish (horrible idea) and gives you a better chance of producing an Urban Meyer (but with less questionable practices and more werewolf awesome).

So don’t take too much stock in knee-jerk reactions, especially those of players who have a personal relationship with their coaches. In this day and age, it’s impossible to leave for another job gracefully or even without your current players finding out. The last thing you want to do is make it public to them that you are trying to get a job that may not even be offered. Unfortunately, once it is offered and accepted, someone is going to find out and let the world know before the ink dries — it’s coaching’s catch-22. Even if you do get a chance to tell your team face-to-face, it doesn’t always end well, just ask Brian Kelly how well that went.

No coaching departure ever goes smoothly. Feathers will be ruffled and feelings might even be hurt, but in the end, these hires are good for Notre Dame as a whole.

Oh, and if your worried that there isn’t good history of teams losing multiple assistants and performing well the following year, there was a team last year that lost six assistant coaches after a 12-2 season. This year, Florida State will play for the National Title against Auburn.