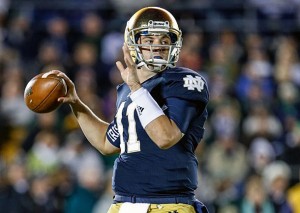 When Tommy Rees takes his final run out of the tunnel in Notre Dame Stadium, he will surely be met with a mixed reaction. While I am certain boos won’t be audible (and if you are planning to do so, please give away your ticket and never return), the fact remains that opinions and feelings on Tommy vary greatly.

To me, there are three distinct groups. The first, and smallest, are those that simply love Tommy and think that the starting job was always his. The second, and unfortunately at times the loudest, is the polar opposite and believe he might just be one of the worst quarterbacks to ever take snaps for the Irish. The third, that I consider myself a part of, recognize Tommy’s shortcomings, but also realize that he is the best man for the job for 2013 after Golson got the boot from ND.

No matter which group hat you believe best describes your feelings on Rees, it is safe to say that the majority of ND fans do not give Tommy the appreciation that he deserves. Throughout most of his career he has done a largely thankless job.

And that in itself is somewhat ironic as Tommy probably got too much credit for his success as a starter in 2010 when the Irish closed out the season on a 4-0 run. After coming in for an injured Crist, Kelly heavily leaned on the freshman, going to the air 54 times, including the first true “TOMMY, NO!” moment with an interception in the endzone to seal the Irish loss. Despite claiming we should “get used to it”, Kelly radically changed his game plan and Tommy only threw more than 30 passes in one game, a win against Southern Cal. Defense and the rushing attack propelled the Irish through those four wins as Tommy simply managed the game as best he could; in fact, his highest yardage total in those wins was against Army with a pedestrian 214 yards.

Rees was called to step in once again for a struggling Crist and kept the job for the entirety of the season. Unfortunately for Tommy, that season was so full of interception memories that you’d probably be surprised to learn that Tommy actually threw more TDs than INTs, had a 65% completion percentage, and was just 139 yards shy of a 3,000 yard season. Those four wins in 2010 were a distant memory. The quarterback that was once lauded for his 4-0 start had seemingly everyone fly to the opposite direction, anxiously awaiting the day Everett Golson would take over.

Despite clutch performances as a backup in 2012 and noticeable improvement in 2013, #11 never shook the 2011 narrative.

And that narrative has clouded what Rees has done for Notre Dame in his career, which brings us back to the point of him performing a mostly thankless job. Yes, Tommy hasn’t lit up the stat sheet nor does he have the physical tools that someone like Golson or even Zaire has. Without him though, this program probably takes a radical turn for the worst.

When Tommy signed in 2010, he did so as a 3-star and in the same class as fellow QBs Andrew Hendrix (4-star) and Luke Massa (3-star, whom hasn’t seen a snap yet). When Brian Kelly inherited this class from Weis, certainly he did not expect for Dayne Crist to have so many issues before he had a chance to install “his guy” at QB nor did he likely expect that Rees would be the guy that would rise as the top signal-caller from that class. Kelly likely thought he had a year or two of Crist to bridge the gap, but that didn’t happen.

When Crist went down against Tulsa, the 2010 season could have fallen into shambles. The 4-5 Irish went up against #14 Utah in a game that looked like certain doom. With a trip to Southern Cal on the horizon, the Irish going 5-7 and no bowl game wasn’t out of the question. Instead, Tommy held it together and helped the team end the season 8-5 with a Sun Bowl Victory.

Even in 2011, Rees was option B. When Crist faltered, Rees stepped in and, while 8-5 with a bowl loss wasn’t an optimal result, saved Golson’s redshirt. That saved year looms incredibly large right now as Golson lost a year of eligibility due to his expulsion. While Golson certainly has the option to head to the NFL this year, that option would surely look a lot more attractive if he plays in 2011 considering that 2014 would be his final shot. Instead, we now have the potential for two more years of Golson instead of one or even none.

2012 likely doesn’t end with a BCS Championship berth without Rees as well. Instead of transferring once he lost the starting job, Rees stuck it out as Golson’s backup. Wins against Michigan, Purdue, and Stanford likely don’t happen without Rees fulfilling his role as “closer” during that season. Further, the unique “closer” role allowed Golson to develop and make mistakes with Rees serving as the security net for the Irish if things went wrong.

This season, Rees is saving yet another redshirt: Zaire’s. Before Notre Dame received the news that Golson wouldn’t be available this season, Kiel did what most QBs that feel they won’t see playing time do, transfer. In less than a month, Notre Dame found themselves without their two top recruited QBs, placing Zaire’s originally assumed redshirt year in danger. But Rees again has stepped in to make a program-building save.

Further, Rees has done all this at a 60+% passer, finds himself just shy of 7,000 yards despite not starting for a full season (2013 will be his only full year starting), and throwing 58 TDs along with 34 INTs. Again, the numbers aren’t stellar, but they aren’t awful either.

When Golson was announced as the starting QB post Tommy’s arrest, I made a Dark Knight reference, but I think I was a season too early. Rees is the QB we deserve, but not the one we need right now. He’s taking all the criticism and blame in Golson’s absence and doing so because he can take it.

Rees may not be the straw that stirs the drink, but he’s definitely been the glue that helped hold this program together when it could have easily fallen apart. For that, we owe him our thanks and our cheers on senior day.