Well, I for one welcome our new computer overlords. The BCS in its current form – ridiculous – is hitting the home stretch. At this point, no self-respecting fan of college football should be able to sing any praises of this system which proved to be experimental at best and lacking, limited, and lousy at worst. Systematic and complex ranking algorithms, whether human or CPU-based, have been both the calling card and scourge of college football for quite some time.

In a grand sense, there is no reason to believe computers over people, or people over computers, when people are really the cause of each measurement methodology. But one thing is for sure, it’s pretty tough to program a computer with regional bias, rose-coloring, ignorance, or slight. As the graph shows, someone always stands to gain from human perception in voting, and someone is usually getting punished.

So here is your BCS ranking red-meat hate served rare, Irish fans. In the current BCS rankings, Notre Dame has the biggest gap (shown by distance from zero upward) between their BCS computer ranking average (15), and their ultimate BCS ranking (23), a disparity of eight places. Louisville is getting the most warm, fleshy, human love: seven places better than the bots in the overall BCS. Oregon, Ohio State, Stanford, and Fresno State are each dialed in and falling on the equator with a zero, indicating their ranking is the same via human and robot. 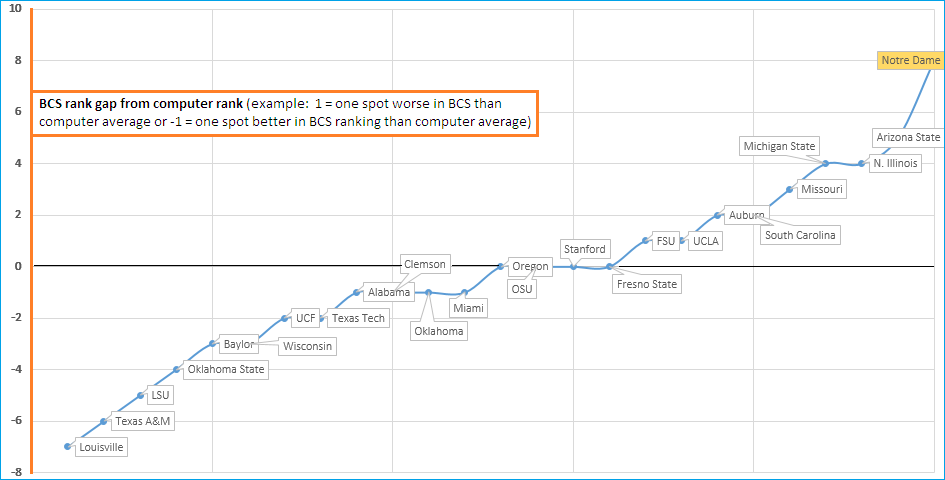 In short, if you believe the (human) world is against ND and by the numbers they should be ranked much higher, and you love movies such as I, Robot, Terminator 2, and War Games – well, this might be your week. Notre Dame received the least human love this week and it’s not even close.

Latest posts by The Irish Twins (see all)

About The Irish Twins