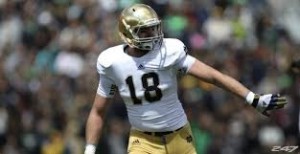 With two touchdowns in the last three games, Ben Koyack is quietly emerging as a legitimate offensive threat for Notre Dame. While his season stats will not turn many heads, Koyack’s emergence does something more important for the Irish than filling up the stat sheet—it allows the offense to use more multiple tight end formations.

As I have previously written, multiple tight end formations create mismatches that defenses cannot easily counter with changes in personnel or formation. Linebackers are generally too slow to cover tight ends, and defensive backs generally lack the physicality to cover them. As a result, defensive coordinators constantly face a double bind. On one hand, if they use base personnel (e.g., 4-3 or 3-4), the defense is vulnerable to the pass. On the other hand, if they substitute to a nickel package, the defense is vulnerable to the run.

In addition to creating mismatches, using multiple tight ends can disguise the offense’s intention (whether run or pass) and limit the need for substitution. A personnel grouping consisting of one running back, two tight ends and two receivers (12 personnel) could indicate power run just as easily as it could indicate a pass with five eligible receivers. If the tight ends are legitimate blockers and receiving threats, the offense can effectively line up in or motion to just about any formation imaginable.

Let’s look at some examples of the Irish using multiple tight ends against Air Force.

This first play is a good example of how having two tight ends can create mismatches in the passing game. 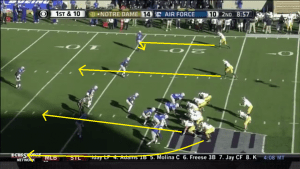 Notre Dame lines up with tight ends Ben Koyack and Troy Niklas to the boundary and receivers Davaris Daniels and T.J. Jones to the field. Air Force has a single-high safety, which is usually a good indicator that the defense is playing Cover 1 or Cover 3. When facing a single-high safety, the Irish will often use wheel routes like the one Koyack will run on this play.

The 6-5, 253 lb Koyack ends up isolated against 6-2, 230 lb linebacker Jared Jones. Niklas’ seam route holds the safety and cornerback long enough for Tommy Rees to hit Koyack in the end zone. Air Force has to pick its poison: cover Koyack with two defenders or cover Niklas with two. Either way, the Irish will have a favorable one-on-one matchup for one of the tight ends. 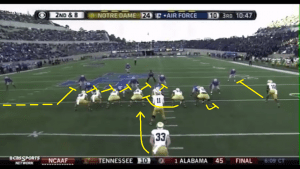 Notre Dame lines up in a Pistol formation with Koyack and Niklas in-line to the left side. Although Air Force has eight defenders in the box, Rees will motion James Onwualu in tight to control the Sam linebacker and get an extra blocker at the point of attack. With an extra tight end and the backside guard pulling on the Power O, the offense will actually have a numbers advantage to the playside.

The entire left side of Notre Dame’s line, including Koyack and Niklas, down block and almost push the Falcon defensive line to the far side of the hash mark. Cam McDaniel gets through the hole quickly for a nice gain.

Finally, the video below illustrates how easily a multiple tight end offense can shift from a power formation to a spread formation without changing personnel. Notre Dame opened the second quarter facing a 3rd and 2. With the Irish lining up in the Pistol formation and 12 personnel, the Falcons sub in what appear to be run-stopping defenders. As the new defensive personnel run onto the field, Rees changes the play and empties the backfield.

The line gives Rees plenty of time to find an open receiver. Jones eventually breaks open down the sideline for a big gain on 3rd and short. The Irish were able to give Air Force a power look and ultimately send five receivers out on patterns. Neither tight end was targeted on this play, but having two tight ends on the field was at least partially responsible for the defense bringing in run-stopping defenders.

Brian Kelly noted that the increased use of two tight ends in recent weeks has resulted in more consistency on offense. If Koyack continues to be a reliable blocker and receiver, look for multiple tight end formations to be a significant part of the offense moving forward.

Just living life one quarterback draw at a time.