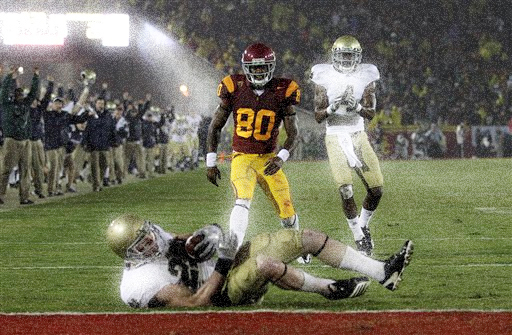 First Thing – I must start off with a big thank you to the team here at Her Loyal Sons for welcoming me with open arms in light of the retirement of The Subway Domer. TSD was gracious enough to invite me to a bigger site back in the summer of 2012 after only a year of blogging solo at my original haunts of Herring Bone Sports. To have been extended an invitation by two of the most prominent Notre Dame blogs in such short order is in many ways humbling and I look forward to adding to the great content regularly produced at HLS.

For the uninitiated to my particular Fighting Irish stylings, <Troy McClure voice> you may remember me from  my podcast work on TNNDN (The New ND Nation) or when I shouted down Fran Tarkenton during a Huffington Post debate about the 2012 Heisman. I’m a SoCal native whose family bumped into Lou Holtz during a cross-country vacation in the summer of 1988 while touring the Notre Dame campus. Dr. Lou sold me on something that day and I’ve followed the team with a passion ever since in spite of no alumni relations or direct regional ties to the University. My father and would go on to take in every USC-Notre Dame game in Los Angeles between 1992-2000. I am not an alum but I’d prefer to blame that on my own goals on the gridiron. A former offensive lineman, my career ended at I-AA (FCS) Wagner College in New York City. Very fortunately, my family inherited a home a few years back about 35 miles from South Bend and it affords me the opportunity to head in a few times per year for games. Enough about me – looking forward to getting to know some new Irish fans on this site and I hope you enjoy the podcasts which are by far my favorite vice for discussing and debating Notre Dame Football.

This show is available in iTunes under the “TNNDN” feed or you can listen here via our BlogTalkRadio link.

Matt Mulvey (’12) & John Walters (’88), my USC Preview interviews, have been guests on most of my MCQB shows because I feel their insight (*and availability to me) brings a different and unique view of the team and the program. Mulvey was the original leader of the Red Army, experienced the Weis-Kelly transition as a player, is close friends with Tommy Rees & Everrett Golson, and quite simply knows what’s going on with the QB play better than any single person outside the program. It’s my goal each week to get something from him that you can’t find anywhere else. When providing the Red Army Reviews you’ll catch his commentary on footwork, audibles, defensive schemes, and insight into Brian Kelly’s playcalling. This week he discussed why Tommy’s completion rate has dropped so significantly in 2013 and what he thinks the coaching staff could do to help him be more successful in the season’s 2nd half. He also singles out a key Irish offensive weapon he’d like to see “get mad” and live up to his enormous potential on Saturday night. Walters left Notre Dame with classmate Tim Brown and moved right into Sports Illustrated where he did research and later wrote for the magazine for over a decade before heading on to other opportunities. He’s worked the Notre Dame beat and covered college football for over 20 years. His Twitter feed (@jdubs88) has become a beacon of honest opinions and insight into Irish football, pop culture, politics, financials, and almost anything else. Without a current position dependent on ND Football access, he’ll sit back and let it rip through tweets and during interviews on my show. Enjoy the show.

It’s great to be here at Her Loyal Sons and I’m looking forward to the next step.

Questions, complaints, concerns? Comment below or get at me

Latest posts by ManCaveQB (see all)