Although many eyes and much of the focus at the Blue/Gold game was fixed upon three QBs, our stable of running backs just about stole the show . In the first half, there were only two more passes (38) than runs (36). Granted, not all of these rushes were from the backfield, so taking away the QB runs, scrambles, Toma’s reverse, and a kneel down, the backfield gained 172 yards on 21 carries in the first half.

For this session of the Film Room, we will highlight three of those the runs. We will see a run working just as it was drawn up, a cutback working to perfection, and talent absolutely taking over.

We start with the first rushing play of the game and Cierre Wood in the backfield. 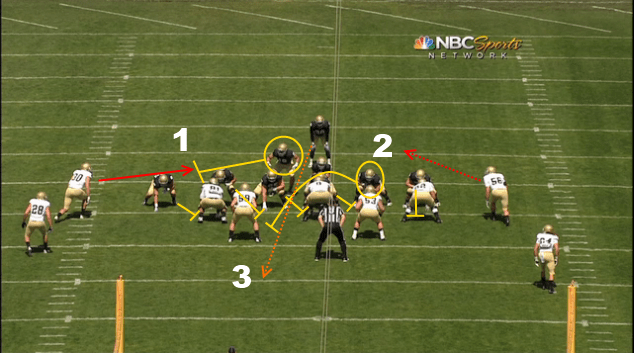 Lots going on in the above shot, so let’s follow the numbers to see just how this play is drawn up.

1) The TE in motion must seal the edge and in this case, stop a blitzing LB. The line will be moving in the opposite direction (to the right in this case), meaning that a missed block here will blow the play up completely.

2) The LG (circled) will pull and help create a hole, acting as a lead blocker. The blitzing LB on this side isn’t a concern as everything will be moving away from him. The final piece on this side is the LT contains the DE in front of him, protecting the gap left behind.

3) Should everything go to plan Wood will have a nice hole in which he can shoot through. 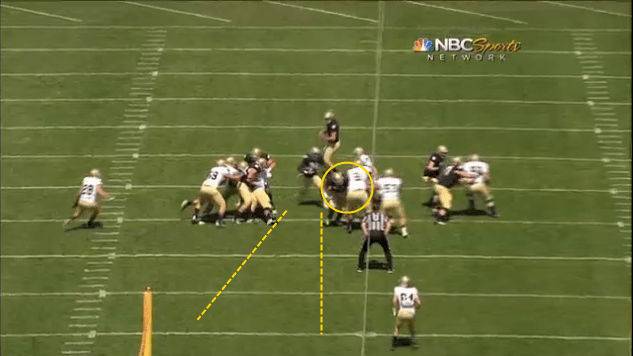 Circled above is the LG highlighted earlier. Â He seals off the hole and leads Wood much like a FB would, leaving a gigantic lane in front of Wood. As an added bonus, the Irish successfully handled an 8-man box in this play, leaving Cierre with all kinds of real estate in front of him.

Of course, in football not everything goes according to plan. Wood’s very next run demonstrates this: 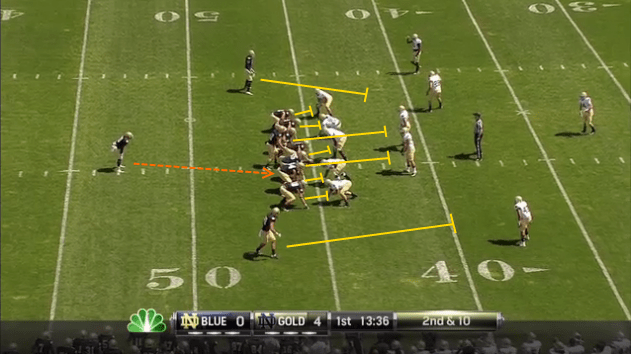 This play is much more straight-forward than the last: block everyone in front of you. The hope here is that everyone wins their one-on-one battles so the gaurds can be free to take out the LBs at the second level. Then, should the WRs contain the DBs on the edge, Wood is left with just the safety to beat. 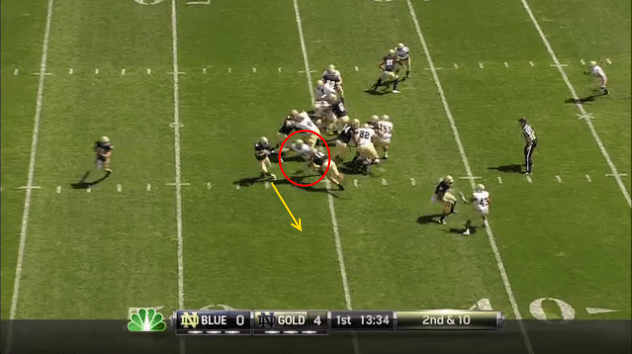 However, as we can see above the Irish loseÂ a one-on-one battle in the red circled area. A defender has broken through, but Cierre makes a quick cutback reaction to extend the play. 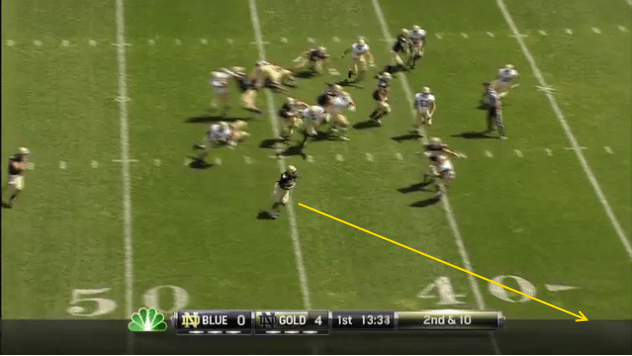 Wood’s cutback allows him toÂ completelyÂ evade the incoming defender and, thanks to some good blocking on the edge by his receiver, has a wide open path to the sideline.Â Thanks to just this simple cutback, Wood takes what could’ve been a loss into a 20 yard gain. This play demonstrates that the instincts of the RB can be just as important as the execution of everyone else in the play.

Now, that last play only had one slight issue–let’s take a look at a play in which practically nothing goes right: 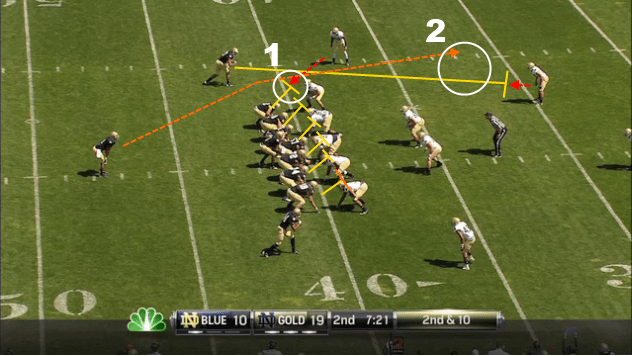 This play is a stretch run toward the sideline. The idea here is for everyone on the line to take the man on their left or push the defender in front of them in that direction. The running back will then try to read where the best hole is and head down that direction.

And now, it’s time for the play to fall completely apart: 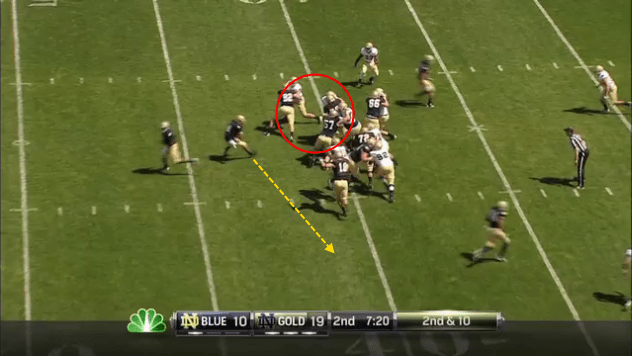 In the picture above, GA3 sees that he has very little of a hole to run through (and an unblocked CB waiting for him as well). Feeling he can get more yards than what’s given here, he makes a cutback.

This turns out to be a very, very bad idea: 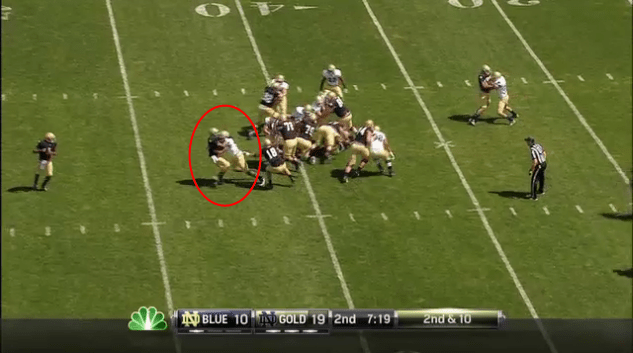 After the cutback, Ishaq Williams is waiting and appears to have blown up the play. Unfortunately for Ishaq, GA3 decides to go beast-mode and somehow breaks the tackle. 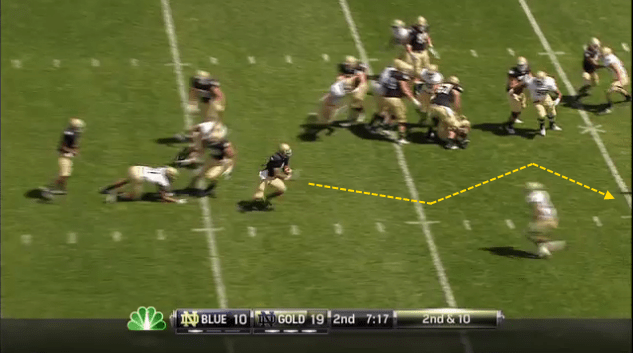 Now the line I drew above is no exaggeration for how this play is about to continue. Even though he broke the tackle, GA3 is now all by himself and the defense has had plenty of time to react to his cutback; however, he pulls of a series of jukes to make his way past everyone.

And then, after breaking two more diving arm-tackles: 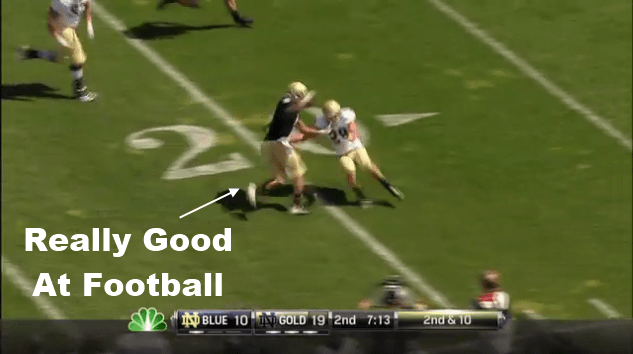 And the above is pretty much all I have to say as he breaks yet another tackle before finally being taken down.

This play is a prime example of where a player makes a very bad decision, but his talent allows him to get away with it. Considering how I love stats and breaking plays down to the point where I can be overly critical of them (just look at last week), this play should drive me crazy; however, the football fan in me can’t help but take over.

Seriously, watching GA3 pull this off this absurdity was just fun.

With Wood looking like he hasn’t skipped a beat, GA3’s electric play-making ability, and Theo Riddick’sÂ talent to be all over the field, even as a receiver, this backfield has all kinds of potential to have a superb season. Let’s not forget that somehow USC transfer,Â Amir Carlise, will somehow be thrown into this mix as he is cleared to play in 2012.

There may be a quite a bit of focus in who will be taking snaps for the Irish this season, but make sure you pay attention to the players lined up behind (or to the side) of the eventual ND QB.