Answer: I’d never have any interest in seeing Cheerios in a bowl. 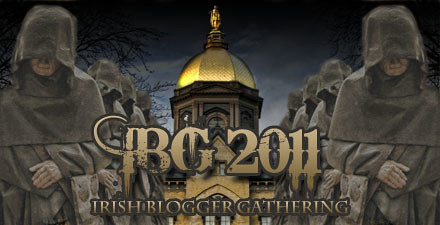 Subway was nice enough to ask that we host the 2011 Bowl Game edition of the Irish Blogger Gathering, and he must have caught us on a good day because we were nice enough to say yes. So I put together a set of questions. At first I’d aimed to use some good questions from my Twitter followers, but I’d actually harvested enough good questions there that I instead aimed to create a manageable set of questions that would serve as an amalgamation of what was asked on Twitter.

Our participants in this IBG include (in order of responses received):

Thanks to our participants for joining in the conversation. I’d imagine a few of them will post their full set of answers to each question soon, so go check them all out.

And away we go…

1) FSU might start as many as 4 freshman on the offensive line. In 40 words or fewer, describe what you’re expecting to be the result of such a move.

Poot – Lots of pressure. I’d be disappointed if we didn’t hassle Manuel all day. However, we need to be disciplined in our rush so he doesn’t run all over us.

2) Lots of stuff Coach Kelly has been saying lately is getting people to believe that if Hendrix looks hot during the bowl game, he may just keep playing in the game. Give me 1 pro to that scenario and 1 con.

Poot – Adding dimension to the offense. Dynamic run threat could help slightly neutralize outstanding FSU pass Rush
Gameday 40 (Steve in IA) – BK finally breaks the binding on the playbook stretching the field vertically with Hendrix’ arm strength and horizontally with his running ability. This is HUGE given the athleticism of the Seminole defense.

Subway Domer – If ND loses, Hendrix will of course be blamed as the reason- hence annoying the crap out of me.

3) If you’ve paid any attention at all, you know that the Champs Sports Bowl was officially a sell-out pretty darn quickly. Meanwhile Virginia Tech is struggling to get their allotment of tickets to the Sugar Bowl sold. Remember, the Champs Sports Bowl is a game between 2 very disappointed 8-4 programs longing for the glory days of yore. So explain how this bowl sold out, and try to leave all the rah-rah stuff out of it.

Let’s Go Irish – Sorry, but the rah-rah stuff is a factor here. Notre Dame travels well, and their fans buy tickets, partly because of that rah-rah stuff. Florida State is obviously going to sell in Florida. It’s a dream match-up for those promoters. What are you supposed to say — Notre Dame fans are buying tickets because they want a reason to be near Mickey and Goofy?

Poot – FSU is already in Florida. Not a far trip to see your beloved team over Christmas break. ND fans will travel anywhere. Game being in Orlando allows people to sell it as family vacation. “We can even go to Disney with the kids!”

Gameday 40 (Steve in IA) – To explain this phenomenon, I give you the words of that most insightful interpreter of the human psyche, Don Draper.

As he charms the Kodak execs, Draper tells them (and us) “… in Greek, ‘nostalgia’ literally means ‘the pain from an old wound’. It’s a twinge in your heart, far more powerful than memory alone.'” This is far beyond “rah-rah.” It is that ‘pain of an old wound’–and for the Irish faithful those wounds are manifold and spread over decades– and this is what is driving the attendance figures. Those wounds are numerous and this game offers a chance at healing. The Champs Sports Bowl, pitting ND versus Florida State, is a potentially a sacramental experience for these fan-bases. And Irish fans more than anyone else should understand the power of sacrament. Don Draper certainly does.

4) Will there be an unexpected “hero of the game” for the Irish, or will such a hero prove useless, as the Irish blow out the Seminoles or the Seminoles take the game too far out of reach for the Irish for a hero to be effective? If there will be a hero, who will it be?

Shamrock Head – Hero of the game: George Atkinson III. Which wouldn’t be entirely unexpected, I guess, because the man’s got mad slick moves and everyone knows it. Even so, I hope he gets some touches outside of kickoff returns, because the kid’s got promise. He is the FUTURE. And I hope he returns at least one kickoff for a TD, because given the paucity of our punt return unit, our special teams really needs some street cred.

Let’s Go Irish – I would somehow hope that Golic exceeded all expectations – but I’m not holding my breath. Maybe Lynch causes a key fumble and recovers it. After all, it was FSU that told him he couldn’t cut it at ND academically and recently tweeted about his 3.0 gpa.

5) You Play. To Win. The Game. Unless you don’t. In which case You Play. To Prepare. For Next Year. Which would you prefer to see in this game? And yes, it’s a binary choice. Pick one.

Subway Domer – If this is disguised as a Rees versus Hendrix question, it seems pretty transparent. You play to win this game, and I think that means a LOT of Andrew Hendrix. If that helps with next year, so be it. Also, a win in the bowl game only helps, it never hurts. There are some degrees to that, but it is generally true.

Shamrock Head – I don’t care how much talk there is about the Rees/Hendrix switch-up; no coach worth his salt wants to go to a bowl game and lose. No coach trying to build a program wants such utter deflation of momentum going into the off-season. And no program desperately yearning for the glory days of yore wants to lose to another team yearning for the glory days of yore.

Be sure to check in with the participating sites to see their full complement of questions. And we’d love it if you’d check in with your own thoughts about these questions in the comments.