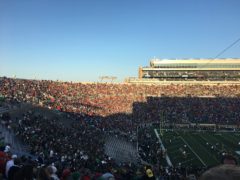 No, that isn’t the south endzone where the visiting fans usually sit…

Before we dive deep into a rant that’s been brewing since I walked into Notre Dame Stadium this past Saturday, let’s get one thing straight right now: I do not blame this loss on a lack of home field advantage. In fact, I am in agreement with Jimmy G’s statement to that fact earlier this morning. However, I do not agree with him in that I simply need to get over it.

Bottom line, I absolutely do care about how many folks donning red and black we allowed to waltz into Notre Dame stadium and I’m mad as hell about it.

Yes, I did every bit of text formatting I could on “allowed” for good reason. Hell, if the blink tag was still a thing, it would be on there too. For all the bitching and moaning that we as Irish fans do here on HLS, the internet at large, or directly at the heavens to no one in particular, we completely failed as a fanbase at the one thing we can actually control: keeping opposing fans out.

Yes, Notre Dame ditched their once super-strict resale policy for a secondary market partnership, making resale kosher. I don’t care. I can understand tickets being resold here and there, but this hit such an inexcusable critical mass in the name of making a buck. Something like the below should never come out of an opposing coach’s mouth.

Kirby Smart was asked about his defense. He said something real quick and then said all this about the crowd. #NDInsider pic.twitter.com/bmkpLKvu7n

By the way, feel free to replace “SEC” with any school that has a true home field advantage. You know the ones. The stadiums that rock so hard announcers will lay out and pump in nothing but a few seconds of the home crowd losing their minds and, when they do try to talk, they and their production team struggle to keep their volume coming through clearly on your TV.

You know what every single one of those home crowds has in common? FANS OF THE HOME TEAM ACTUALLY OUTNUMBER THE VISITING FANS BY A HUGE MARGIN.

I cannot believe this is somehow a hard concept to grasp, but here we are. And the excuses for this…oh man, let’s just start going through these struggles in logic:

Notre Dame sucks and I refuse to go until they start winning/BK is fired/<insert some other dumb thing about the Irish potentially losing here>.

Don’t buy the ticket in the first place?

Seriously, no one is twisting your arm here. If you are upset with the current state of the program, and maaaaaaaan have the Irish given you some ammo to be mad as hell recently, then fine. Don’t buy a ticket.

I mean, what message are you sending if you resell your ticket? One of three things will happen: an Irish fan takes your seat, the opponent takes your seat, or no one takes your seat. The vacant seat is the least likely option here, but the one that actually sends the strongest message that you are mad as hell.

I can’t believe I’m about to type this, but the best way to try and guarantee a vacant seat is to not buy the damn ticket in the first place. Otherwise, you’ve paid Notre Dame some form of a donation to have the rights to buy your season tickets or to have a chance to buy a ticket through the alumni ticket lottery and then you actually buy the thing. You’ve literally lined ND’s pockets twice–potentially three times if you used the official ND ticket exchange.

Sure showed them who’s boss.

It’s not like this was some late-November game that has single tickets released for public sale (aka available without a donation of some kind). This massive resale came from our own alumni and season ticket holders who had to take multiple steps just to have the chance to get this ticket. If there is such a thing as a premeditated murder of home field advantage, this was it.

Season tickets/tickets in general are expensive, the prices for them went up this season, and now I’ve recouped or need to try and recoup my cost.

Of all excuses, this is the only one I’ll list that may actually make some kind of sense. And then I start to think “well, if they are so prohibitively expensive and you need to sell a game or two to keep it in the budget what the hell are you doing?!” or “wait, hold on, you couldn’t find an Irish fan willing to pay over face value?!” and I get mad as hell all over again.

Look, I’m actually with you on the ticket price increase rage. It’s part of the reason that I planned to not go to any Notre Dame games this year as to buying a house and having another kid on the way kinda kills the budget. This year, the cost increase was too much to justify going to any game that I was actually excited about. No worries, I’ll stay home and go next year.

A stoke of luck in my local alumni club lottery, plus a ton of travel points, were the only way I could realistically afford the journey this time around. Now, if I didn’t have the means to travel and still had those tickets land in my lap, I would’ve made sure that they were recirculated within my club or found their way into the hands of another Irish fan.

This might be the only thing I am actually old-school on when it comes to ND football. Yes, I know what the “smart business” decision is in terms of a bottom line, but I don’t see a ND tickets as some kind of stock that might help me turn a profit. There’s enough profiteering around college sports these days and at least my alma mater will throw it into new non-football related buildings for academics or student life. You know, kinda like the ones literally attached to the stadium!

So feel free to call me old-fashioned if I get a sleazy feeling in my gut if even a fleeting thought of reselling one of my tickets creeps into my head.

Honestly, this leads all basically to the next excuse…

To reiterate, in order to resell a ticket, a donation to the University and a payment to the University for the ticket need to be made. If you are willing to die on this hill, you’ve already been shot in the head. If you resold via the official ND ticket exchange, your corpse has been set on fire.

Allow me to put this another way since I already made the above point earlier: if you truly believe ND is money grabbing, how in the blue hell is reselling your ticket going to stop the practice you despise?

This reminds me of the “backlash” Jerry Jones received here in Dallas when he introduced Personal Seat Licenses (PSLs) for the right to purchase season tickets for the Dallas Cowboys in 2009 to coincide with their new stadium. Sports radio had all the hot takes about how this was just one step too far and removed the common fan from the game. By God, people just weren’t going to renew this time around.

PSLs still exist for the Cowboys. Financing is available. It’s almost like Jerry never got the message for some reason. Weird.

That sea of red sent a message to Swarbrick and the administration of ND. I hate the field turf. I hate the jumbotron. I hate the Crossroads. None of that creates a home field advantage.

Notre Dame fans go full hypocrite by becoming the same thing so many of them accused ND of being with the Crossroads project: complete sell-outs.

Message received. Collective ass shown. Rest of the nation can’t unsee nor do they want to. This is mana from the heavens for anyone outside the ND bubble.

There was another message received loud and clear. This one was delivered to the fans that did show the hell up, to the student section, to the players on the field, and potentially even to the recruits that were visiting: there’s a rather sizable group of alumni and season ticket holders that care more about dollar signs than supporting a team they supposedly care about.

By the way, that message doesn’t disappear when a new coach walks the sidelines, a new athletic director takes the helm, or even when ticket prices inevitably change again. We still remember the first Sea of Red and we won’t forget the second one.

You want Notre Dame Stadium to sound like this again? Show the hell up and keep the tickets in the family. Oh, and scream like hell while you’re in Rock’s House because winning alone won’t magically create decibels.